It’s fair to say the inauguration of Donald Trump has stirred some passions in the electorate. But with the exception... 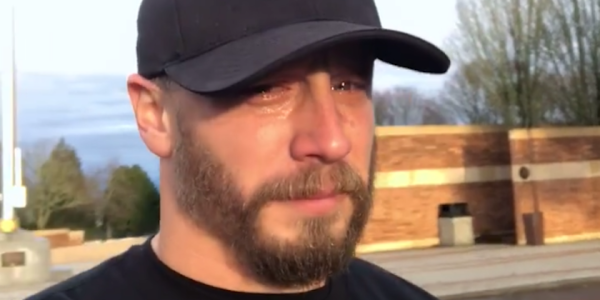 It’s fair to say the inauguration of Donald Trump has stirred some passions in the electorate. But with the exception of the occasional flaming limousine or a neo-Nazi taking a sucker punch to the head, people have been remarkably civil, respectful and peaceful. That’s how we like it.

But over in Portland, Oregon — long a nest of would-be rebels — some people thought it might be constructive light some American flags on fire.

“The new murderer-in-chief wants people who burn the flag to lose their citizenship and spend time in jail,” Facebook user June Nova explained. “Let's show our disgust for this empire of blood, it's angry orange emperor, and all of the ignorant inbred goons who make up its power base, by incinerating the cloth rectangle that they worship.”

One guy who was not down for this Bic-fueled tantrum was a local Marine veteran named Eric Post. The former combat engineer, who served in the mid-1990s at Camp Lejeune and is now co-owner of a real estate company, arrived home late Friday afternoon on the day of the inauguration to find a few images of burning flags a friend had texted him. He immediately decided to go down to the protest site at Pioneer Courthouse Square and confront the demonstrators.

His wife of 21 years thought this might not be the best approach. “On my drive, she used a pretty powerful weapon against me,” he told Task & Purpose. It was a text from his daughter: “I love you daddy.”

Post immediately headed to the nearby Willamette National Cemetery to think things over for a minute. Stepping out of the car to collect his thoughts, he found himself near the area of the cemetery dedicated to the memory of local Medal of Honor recipients, and he started reading the plaques describing their acts of bravery. “I found myself overcome with emotion that there were thousands buried there that did not have the ability to tell their stories and speak up the way I can,” he remembered.

That’s when Post pulled out his phone, pressed record, held it up and just started talking.

“Hey protesters…” he began, alone on a quiet hill, his eyes wet with tears. “You want to burn the flag, it’s your right. I get that.” He didn’t insult anyone. He made no threats. He skipped the kind of language that a Marine might employ under the circumstances. He just tried to explain why the agitators’ decision to exercise their First Amendment rights in this particular manner was so hurtful to so many people. Then he suggested they “meet me up here sometime, and we can take a tour, and you can learn a little bit about sacrifice and pride and honor.”

The video concludes, “Your day will come. Maybe you’ll get wise one day and realize that the symbol of the flag isn’t what you’re protesting. That’s what gives you the ability to protest. You should cherish that, not burn it.”

The video has now been streamed more than 2 million times on Facebook.

Post wasn’t kidding about offering to meet flag-burners face to face. Not two full days later, following Donald Trump’s inauguration and the Million Woman March, he stood beside the flagpole that overlooks the vast cemetery and addressed a crowd of more than 100 who’d showed up to hear him out.

“If you’re just simply trying to piss people off, you’re doing a pretty good job of it,” he said. “Please have your grievances with the new elected president. That’s okay. But please don’t disrespect you and me in the process.”

He then made a radical suggestion. At a time when Americans are so bitterly divided, what if the flag itself became one area of common ground? What if we looked at it as a symbol of our freedom to voice our opinions? “Wouldn’t that be cool?” he asked. “Wouldn’t it be cool if the immigrant that came here and was able to start a business and escape the prosecution of where they’re at — that’s what the flag means to him. Why would that protester burn it for that person?”

Perhaps it comes as no surprise that not a single flag-burning protester showed up to hear these words. The crowd was made up of people who’d simply been moved by Post’s heartfelt message. One woman, he recalled, had driven for four hours to attend. She told him she was from Palau, the South Pacific island that had fallen to the Japanese during World War I, liberated by American forces in World War II and later granted sovereignty. Holding his hands in hers, she told him that his original Facebook video had found its way to the island, and that her countrymen had asked her to come deliver their thanks in person.

Flag burning (along with other types of “desecration”) was first outlawed by an act of Congress in 1968, and 48 states followed suit. The Supreme Court subsequently struck down the law on First Amendment grounds, meaning that the only route to a ban would be a Constitutional amendment, something the new president would likely support.

Nobody should be allowed to burn the American flag – if they do, there must be consequences – perhaps loss of citizenship or year in jail!

“Last night, a buddy sent me a screenshot of Trump’s tweet and said, ‘Look what you did!’” Post told us. “He was kidding. But it would be very easy for me to rally behind that. That would be the easy route. But I’m not sure, because I think there’s a better way. In general, if you try and force people to feel a certain way you’re going to be met with heavy resistance. They’ll galvanize against you.”

At this point, Post seems to be leaning toward persuasion, and the response to his video indicates he might be one of the few Americans who can talk some sense into the radical fringe that sees flag-burning as an effective form of political expression.

As he put it in another video, “Especially if you’re on the other side of the argument, you have to hear what the person with the opposing viewpoint has to say. You just can’t listen in preparation for your rebuttal. You have to really listen.”

That’s a rare ability these days. In fact, Post is so deeply committed to thoughtful debate — at least in his calmer moments — that we couldn’t help wondering if he might one day seek elected office himself. He admits that others have wondered the same thing. He’s not ruling it out, although like any smart entrepreneur in a politically divided region, he’s not quite ready to say which party he’d represent. “I’m financially conservative and more in the middle on social issues,” he said. “It’s hard to 100 percent apply a label, but more on conservative side, I’d say.”

Either way, he’d be a hard man to beat.