7 Everyday Foods That Were First Developed Just For The Military

Did you ever crack open your lunchbox as a kid at school on a Monday and find yourself wondering how... 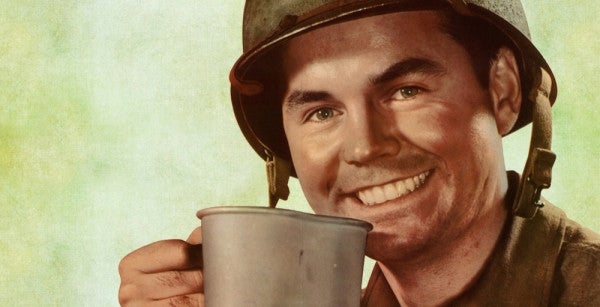 Did you ever crack open your lunchbox as a kid at school on a Monday and find yourself wondering how the classic contents — ham and cheese on white bread, bag of chips, M&Ms; — became the mega-popular snacks that they are today? You can thank the U.S. military for most of those.

For the last century, America’s many wars abroad have necessitated the development of long-lasting yet nutritious foods that can keep troops happy and healthy with minimal cost. The innovative processing and preservation methods pioneered by military food scientists didn’t stay within the military: According to Anastacia Marx de Salcedo’s 2015 book Combat-Ready Kitchen: How the U.S. Military Shapes the Way You Eat those once-utilitarian culinary designs became staples of civilian culture, so far that there’s “ military history of practically everything you buy at the supermarket.”

Task & Purpose did a little digging to serve up some of the best everyday food items that got their start in the U.S. military. What we found was, well, delicious.

Sliced bread is the greatest thing since, well… sliced bread. Homemade bread is damn tasty, but it doesn’t exactly have a long shelf life, which led to problems when the DoD deployed thousands of troops overseas for World War II. According to Mother Jones, military scientists “came up with anti-staling additives to make shelf-stable bread” to ensure longer-lasting foodstuff. The sale of this particular food item didn’t stop when America declared victory: Instead, sliced bread became a staple of U.S. households and the packed lunches of schoolchildren.

Everyone loves these corn-puffed snacks, even if they leave behind an orange cheese powder residue that will stain anything you touch for days. But that orange powder has a very specific purpose.

During World War I, Walter Gerber, Fritz Stettler, and James Kraft learned the art of emulsifying salts with cheese, which is basically a fancy way of saying they managed to create dehydrated, preservable cheese dust. Kraft food distributors then sold this product to the Army, which used it on just about everything — pasta, potatoes, and sandwiches included.

Fast forward to 1948, when the company now known as Frito Lay began spraying cheese dust on puffed corn, and voila! Cheetos were born.

It’s true, what Pringle’s ads say: “Once you pop, the fun don’t stop.” But the thin, curvy, canned chip wasn’t intended to be a fun snack, at least not in its nascent stages. In the 1950s, the U.S. Department of Agriculture was working on a project to make potatoes into thin, crispy dehydrated bites.

“The Pringle itself came out of the project that was done by the Quartermaster Corps and the USDA to develop dehydrated potato flakes, which were then used to create these reshaped, formed chips,” Marx de Salcedo told Vice.

Have you ever eaten a Milky Way chocolate bar? It was invented by a man named Frank Mars. But his son — Forrest Mars Sr. — noticed that people didn’t buy chocolate in the summer because it melted too easily. So he partnered with a man named Bruce Murrie under the Hershey company, and the pair developed a process for created bite-sized, rainbow chocolate pieces that wouldn’t melt. They began exclusively selling the “M&Ms;” to the U.S. military in 1941, when sugar was made unavailable to civilians. When World War II ended and sugar rations were lifted, the candy became extremely popular among civilians. Now, 400 million of these miniature morsels are produced each day.

Before the millennial hipsters took it, packaged guacamole belonged to the military. In order to preserve fruits and vegetables for troop consumption, the military began using high-pressure processing to ensure the longevity of fresh foods. Ready-to-eat guacamole, in addition to a plethora of other fruits and veggies, was made available as a result of HPP. Packaged deli meat is another happy byproduct of HPP.

Though it was Mexican restaurants that originally sought out a way to make Guacamole last longer, the Army’s Natick division was responsible for making it possible, according to Marx de Salcedo. So the next time you joke about rich millennial kids and avocado toast, just remember that the military is responsible for putting prepackaged guacamole on the map.

How do you take an Italian family recipe and turn it into a multi-million dollar corporation? Sell it to the military — at least, that’s what the Boiardi family did.

After opening a restaurant in Cleveland and teaching local families how to cook Italian fare in their own homes, the Boiardis began jarring their sauce and selling it across the country. During World War II, the U.S. military tapped the company, now called “Chef Boyardee” to produce their canned food as military rations.

National Geographic later credited Boiardi with revolutionizing the canned food market as we know it. For his efforts during the war, Boiardi reportedly received a Gold Star order of excellence award — one of the highest military honors for civilians.

The popularity of coffee among soldiers goes as far back as the Civil War, according to NPR. But it was World War I that heralded the age of instant coffee. “The U.S. military snapped up all the instant coffee it could,” the report says. “By October 1918, just before the war's end, Uncle Sam was trying to get 37,000 pounds a day of the powder.”

That didn’t end with the closing of World War I. According to coffee historian Mark Pendergrast, “the American soldier became so closely identified with his coffee that G.I. Joe gave his name to the brew” and American civilians, always looking to add an air of convenience to their lives, made instant coffee a part of their morning routines too.