The Army Is Engineering Rifle Optics That Will Never Miss

In modern military history, “one shot, one kill” was once a creed only for the highly-trained sniper, the hidden assassin... 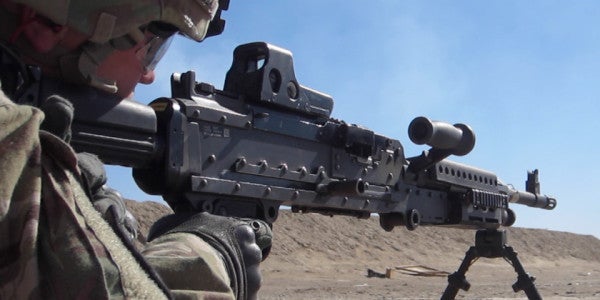 In modern military history, “one shot, one kill” was once a creed only for the highly-trained sniper, the hidden assassin who sows fear among enemy ranks from afar. Not anymore: The Army wants to build a rifle scope and optics system that will never miss — and will turn every infantry soldier into an expert rifleman no matter how much they actually suck as a marksman.

OK, perhaps that’s a bit dramatic, but it’s the focus of a batch of optics and targeting programs currently underway at the Army’s Armament Research, Development and Engineering Center (ARDEC) at the Picatinny Arsenal in New Jersey. And this is no moonshot project: Branch officials expect to start testing a new fire control system on the Next Generation Squad Weapon — the “one end-all solution” to replace the M4 carbine and M249 Squad Automatic Weapon — within the next three years.

Speaking at the Association of the U.S. Army Innovator’s Corner on Oct. 10, ARDEC’s Darren Ward detailed several programs currently in development by the arsenal’s Optics and Targeting Center. They include:

None of these systems are ready for a close-up just yet: Ward told AUSA attendees that the Small Arms Weapon and Fire Control device is too bulky and unwieldy to affix to even an M249 at the moment, and the Rifle Integrated Optic still hasn’t been “ruggedized” just yet. But Army-watchers got a preview of sorts last May, when ARDEC unveiled an M4 mounted in a special auto-aim rig during the Pentagon’s “Lab Day.”

“We're trying to attack the problem of aim error. When you want to hit a target, you have to take into account the weapon, the ammo, the environments and the shooter,” ARDEC researcher Terence Rice said at the time. “And given the fact that we're using sensors, computers and hardware … we can engage targets faster now. What this concept does is reduce aim error and engage targets quicker.”

Terence Rice, a researcher with the Armament Research Development and Engineering Center out of Picatinny Arsenal, New Jersey, demonstrated an engineering model of what one day might make it into the field for Soldiers, during a May 18 “Lab Day” at the Pentagon. (Photo via DoD

The week before ARDEC rolled out its unusual M4 rig, rifle guru and retired Army major general Robert Scales testified before the Senate Armed Services Committee on May 17 that revolutionary advances in computer miniaturization now allow “precision to be squeezed into a rifle sight” more than any other time in modern military history.

“All an infantryman using a rifle equipped with a new‐model sight need do is place a red dot on his target and push a button at the front of his trigger guard,” Scales said at the time. “A computer on his rifle will take into account data like range and ‘lead angle’ to compensate for the movement of his target, and then automatically fire when the hit is guaranteed.”

The soldier of the future, in Scales’ mind, is a one-man sniper regardless of training. Based on Ward’s comments, ARDEC is working hard to make that dream of “one shot, one kill” for all soldiers a reality as soon as possible.