The Army has selected Smart Shooter to furnish the service with its unique 'guaranteed hit' fire control system as an interim counter-unmanned aerial systems solution, the service announced 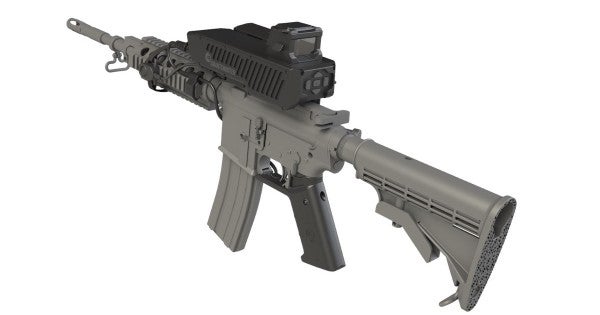 The Army has selected Smart Shooter to furnish the service with its unique 'guaranteed hit' fire control system as an interim counter-unmanned aerial systems solution, the service announced.

Smart Shooter's SMASH family of fire control systems was one of three handheld solutions selected by the Army “to address urgent and emerging operational needs of deployed forces,” the service said in a statement last week.

The Army also selected the 'Dronebuster' and Bal Chatri for use among dismounted infantry forces.

The SMASH family of electro-optical fire control solutions is “capable of leveraging targeting data from a wide range of EO, RF and radar sensors” and can be integrated onto any assault rifle, according to Smart Shooter.

Here's how the SMASH 2000 system works, as previously described to Military.com:

“In recent years, drones and UAS have become a persistent threat over the battlefield, enabling opposing forces to gather critical tactical intelligence and even make direct attacks,” Smart Shooter CEO Michael Mor said in a statement. “The SMASH family of Fire Control Solutions offers precise, swift, and simple hard-kill elimination of this threat.”

In the photos, “coalition forces” are pictured “zero[ing] Smart Shooter sighting devices during a familiarization range,” according to a caption: “Coalition and partner forces regularly train on various weapon systems in a joint effort to help set conditions for the enduring defeat of Daesh in Syria.”

The embrace of Smart Shooter's counter-UAS solution, among others, comes amid growing concerns among military leaders over the spread of cheap drones among U.S. adversaries across the Middle East and North Africa.

Speaking at an event at the Middle East Institute in June, U.S. Central Command chief Marine Gen. Kenneth McKenzie warned of the proliferation of commercial, off-the-shelf drone systems has allowed militant groups such as ISIS.

“I'm talking about the one you can go out and buy at Costco right now in the United States for a thousand dollars, four quad, rotorcraft or something like that that can be launched and flown, McKenzie said at the time. “And with very simple modifications, it can make made into something that can drop a weapon like a hand grenade or something else.”

Related: CENTCOM chief: US troops can't keep up with the flood of cheap drones downrange