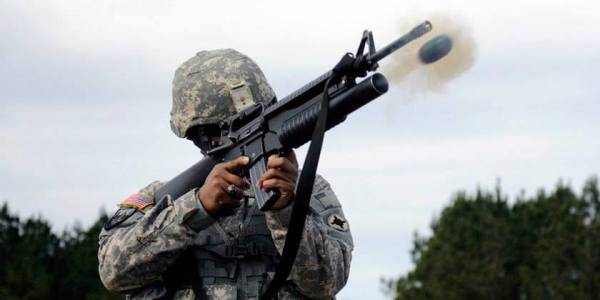 Imagine that you're deployed to some godforsaken battlefield and find yourself pinned down during a firefight, unable to get a clean visual on your adversaries.

Rather than peeking from cover and exposing yourself to enemy fire like a chump, you opt for the Army's newest gadget: a small drone camera fired from a grenade launcher.

Slotting the little robot camera into your brand new M320 Grenade Launcher, you fire the drone straight up into the air. With a two kilometer range and 90 minutes of battery life, you have plenty of time to scope out the area with your drone companion, which sends a video feed back to a handheld tablet.

Within minutes, the drone figures out the problem: a bunch of enemy fighters sniping at you from a nearby mountain range. With their exact location fed to your tablet, you call in air support. Minutes later, boom: no more snipers.

This is exactly what scientists from the Army Research Laboratory envision with their new Grenade Launched Unmanned Aerial System, or GLUAS.

A tiny paragliding drone with folded propellers that fits snugly into the barrel of the standard-issue 40mm grenade launcher, the GLAUS is capable of operating at up to 2,000 feet in the air to feed critical information to soldiers on the ground.

“This device provides an autonomy and intelligence platform to help soldiers perform useful missions while having a lookout from hundreds of feet in the air,” John Gerdes, a mechanical engineer with ARL, said in a statement.. “This integrates modern types of intelligence.”

“In battle, there are multiple scenarios of when soldiers would use this technology,” he added. “How it’s used depends on which theater they’re operating in.”

According to Gerdes, breakthroughs in miniaturization mean that GPS receivers and flight controllers are “very feasible” to install onto the GLUAS, “which makes it easy to maintain a position or follow a ground unit” as a ground-launched eye in the sky.

“Basically, if there is something you want to look at, but you have no idea where it is yet, that’s where the drone comes in,” Gerdes said.

While the flying camera has a variety of obvious applications from situational awareness to intelligence, surveillance, and reconnaissance, there's one function that seems lacking for a system fired from a grenade launcher: exploding.

It's not outside the realm of possibility that ARL researchers could end up integrating a warhead into the GLAUS sometime in the future. After all, the Army has since 2019 been eyeing a suicide drone that can loiter in the air for up to 15 minutes before honing in on targets.

“We’re here to develop innovative concepts for the warfighter’s needs, which generally means we bring the size and weight down of a device, and push up the range and lethality,” Gerdes said. “At ARL, we’re typically focused on the basic innovation and discovery aspects of research.”

Until then, soldiers can count on adding yet another drone tool to their kits in the coming years — if and when the technology eventually leaves the prototyping phrase.

“[GLUAS] is aligned with Army modernization priorities,” Hao Kang, another mechanical engineer with ARL, said in a statement. “We’re trying to provide capabilities to individual Soldiers. The most exciting part of this is the viability of this platform, coupled with its gun-launched deployment capabilities.”