“Over time, using covert and overt means, we forced the enemy to attack in the way we wanted and in a place most advantageous to us.” 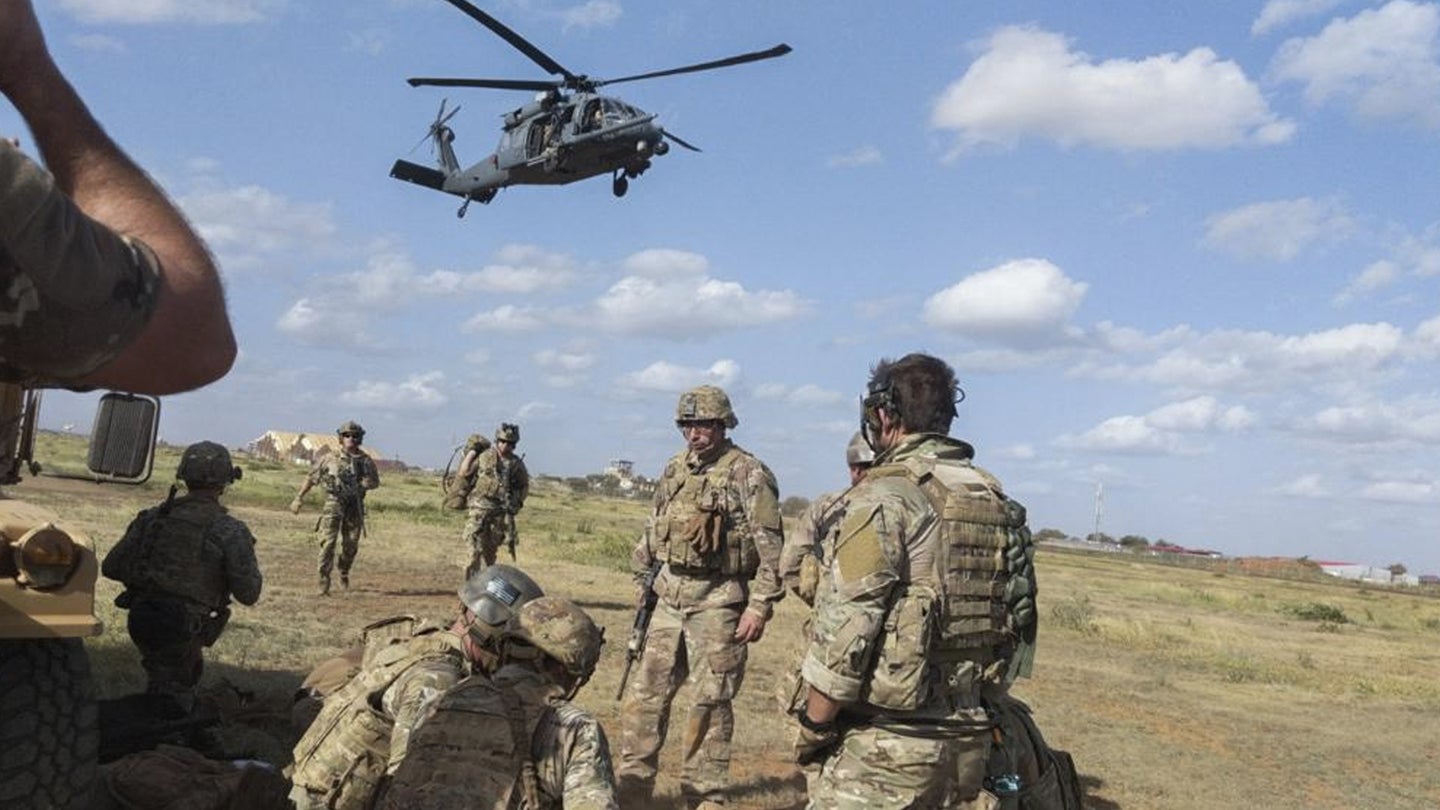 The legendary Chinese general Sun Tzu wrote that “the highest form of generalship is to balk the enemy’s plans,” meaning to prevent those plans from being carried out. Tzu would have probably been proud of soldiers from the New Jersey Army National Guard who, through intense planning, preparation, and foresight, thwarted a massive attack by al-Shabaab militants on the airfield they were guarding in southern Somalia on Sept. 30, 2019.

The attack, which featured three large vehicle-borne improvised explosive devices and 12 heavily-armed al-Shabaab militants, was the “largest battle against al-Shabaab militants since Operation Gothic Serpent,” the 1993 operation to capture the Somali leader Mohamed Farrah Aidid, which included the infamous ‘Black Hawk Down‘ incident, according to a recent Army press release that revealed new details surrounding the soldiers’ response.

“The key was not engaging with the enemy until they were committed to utilizing a specific route that would ultimately be a fatal choice for them,” said Capt. London Nagai, commander of the base defenders that day, in the press release.

“Over time, using covert and overt means, we forced the enemy to attack in the way we wanted and in a place most advantageous to us,” Nagai added.

While al-Shabaab did not officially form as a group until more than 10 years after Operation Gothic Serpent, according to the CIA World Factbook, the point stands that this was a large engagement which could have proved disastrous if not for the extensive preparations of the New Jersey National Guard’s Charlie Troop, 1st Squadron, 102nd Cavalry Regiment.

The soldiers felt such preparations were necessary considering the dangerous neighborhood they had been deployed to. Located 60 miles northwest of Mogadishu, Somalia’s capital, Baldogle Military Airfield was “isolated” and surrounded by enemy activity, several veterans of the battle told Connecting Vets in a 2020 account of the engagement.

“There was no question the base would be attacked,” the press release said. “Al-Shabaab militants had been probing the base perimeter to locate defensive positions and get a picture of where and how the American soldiers would respond.”

Both drone pilots and special operations forces worked at the base, according to Connecting Vets. Overall, the U.S. “works with the federal government of Somalia to promote stability and to prevent al-Shabaab, an al Qaeda affiliate, from conducting attacks against American interests and the homeland,” several U.S. military officials wrote in October.

The New Jersey National Guard soldiers did their best to stay safe by constantly preparing for a fight. Charlie Troop usually consists of about 70 soldiers, but in Somalia the unit swelled to about 160 with fire direction officers and a mortar platoon from the 112th Field Artillery Regiment and the 113th Infantry Regiment, respectively. These troops worked together to prepare for an attack.

“We would rehearse at all hours of the day and with live rounds,” Nagai said. “Charlie Troop exercised and refined this scenario, along with others, over and over again.”

One of the most difficult parts of preparing for the attack was holding fire during al-Shabaab probing attacks. The New Jersey soldiers did not want to reveal their defense plan until it was too late for the militants.

“The hardest part for me was having to tell soldiers we couldn’t fully engage the enemy when they would use recon by fire or other aggressive tactics,” Nagai said. “We didn’t want to show them how we would respond.”

The soldiers left the airfield occasionally to conduct “defensive reconnaissance patrols,” get to know the terrain, and try to win the support of local leaders, according to Connecting Vets.

“Nagai had devised a plan to expand their defensive posture outside the fence line,” Lt. Col. Richard Karcher, commander of Task Force Warrior, of which Charlie Troop was a component, said in the press release. “He was doing stuff right that you don’t see lieutenant colonels or colonels doing correctly.”

Charlie Troop was preparing a convoy to bring a new well pump and soccer balls to one village when the attack started. The soldiers had been warned by intelligence reports that a big attack was coming, and the reports were right: Karcher spotted a plume of smoke northwest of the airfield where a truck filled with explosives had detonated prematurely.

The base was in a tough spot at the moment: a U.S. Air Force plane was preparing to take off, a United Nations flight was coming in to land, and more than 50 construction workers were in the open repairing the runway. Charlie Troop sprung into action moving the construction workers to safety as the Air Force plane was ordered to take off immediately and the U.N. aircraft was diverted to another landing site.

Karcher ran to the base operations center to find that Nagai was already moving Charlie Troop soldiers onto the towers guarding the base, closing entry points, posting snipers and redeploying the convoy that was supposed to leave the wire into defensive positions on the airfield. The base quick reaction force moved toward the airfield and the mortar teams went to the mortar pits. Now it was just a matter of waiting for the next move.

“Our base defense platoon immediately started to fill all the fighting positions along the base perimeter,” Nagai said.

It helped that the base also had cameras watching the battlefield from tethered aerostats, which in this case may have been some kind of hot air balloon.  The cameras may have helped the defenders spot the next threat: a truck that had broken off from a convoy carrying construction materials and was now heading straight for the airfield’s fence line.

Charlie Troop soldiers opened fire on the truck as it approached, but the windows were up-armored so that the driver could get close enough to their target before detonating the explosives inside. The New Jersey soldiers had planned for something like this. A month earlier, Nagai had an engineer platoon dig a wide, deep ditch around the airfield that would stop any vehicle smaller than a tank from getting to the fence line. The engineers did their job well: the truck drove into the ditch and the driver could not back out as soldiers kept shooting the vehicle. Eventually, the truck stopped moving.

Five minutes later, al-Shabaab detonated the truck remotely, and it was evident that the ditch had saved the day. The explosion dug a 20-foot deep crater into the earth, blew a hole in the fence line 200 yards wide, bent reinforced hangar doors on the other side of the airfield and threw shrapnel across the base.

The FBI later estimated that between 4,000 and 5,000 pounds of explosives were used in the bomb, making it the largest VBIED in Africa at the time, Karcher said.

But that was not the end of the attack. Ten minutes later, another truck moved towards the gap in the fence line, where American soldiers immediately opened fire. The truck driver stopped at the newly-formed crater and about a dozen uniformed al-Shabaab militants sprung out holding assault rifles, hand grenades, machine guns, rocket propelled grenades and ammunition. But it was clear the fight was not going the way expected to, as the fighters probably expected to dismount inside the base, rather than outside the fence line, the press release said.

The off-balance fighters “were completely unorganized,” and were not taking cover, the soldier added. Army snipers immediately fired on the militants, half of whom were dead within five minutes. The rest took cover behind nearby berms and began firing rocket-propelled grenades.

“At that point, Capt. Nagai looked at me and said: ‘we need to use our mortar systems,’” Karcher said.

The mortars answered the call with deadly efficiency, thanks again to the preparation which took place beforehand.

“The mortar crews had predetermined points already registered,” Karcher said. “They started firing and that was it.”

The shooting stopped, but a Marine unit assigned to the base determined after peering through the surveillance cameras that the truck carrying the militants was another VBIED. An Air Force drone destroyed the device, finally ending the fight over an hour after it first began. It was a one-sided victory for the 102nd, no members of which had been injured, the press release said, though at the time it was widely reported that one soldier had sustained a concussion. It was the first time a New Jersey unit had been involved in a combined arms battle since World War II, according to the press release.

“The success on that day was not due to luck or heroism,” Nagai said. “It was due to disciplined soldiers executing a well-rehearsed battle drill that was exercised and refined over and over again.”

However, the battle also demonstrated how much firepower al-Shabaab could bring to bear.

“This attack, though ineffective, demonstrates the direct threat al-Shabaab poses to Americans, our allies, and interests in the region,” said Army Maj. Gen. William Gayler, then-director of operations, U.S. Africa Command, said at the time.

Though U.S. and allied service members fought bravely to repel the attack, an investigation by U.S. Africa Command found that Manda Bay’s security preparations were not equal to the dangers surrounding the base.

“The Security Forces’ consistent and predictable inactivity and non-involvement in ‘improving their foxhole’ on a daily basis demonstrated complacency that may have portrayed the airfield as a vulnerable target to Al-Shabaab fighters,” Army Gen. Paul Funk II said at the time.

After the Somalia attack, several of the soldiers involved received the Combat Infantry Badge, the Combat Action Badge, or the Combat Medical Badge, depending on their job title. Al-Shabaab did not launch any follow-up attacks, and 76 days later the members of the 102nd went home.

In August 2020, several members of Charlie Troop received a range of awards including the Bronze Star and the Army Commendation Medal with Combat device for their performance in the battle.