The Christmas Truce has become one of the most storied parts of World War I. It’s also far more complex than the narrative lets on. 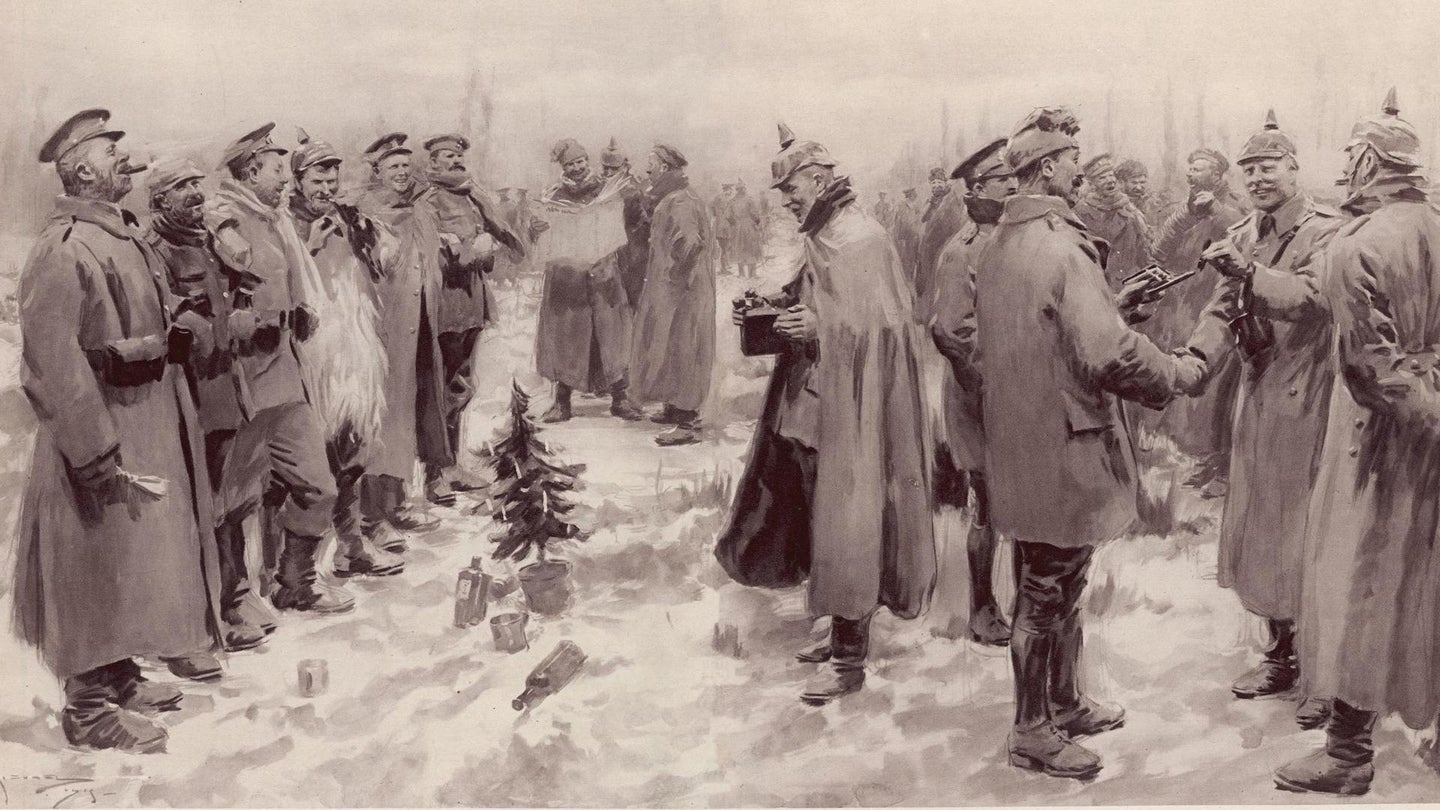 The Illustrated London News's illustration of the Christmas Truce: "British and German Soldiers Arm-in-Arm Exchanging Headgear: A Christmas Truce between Opposing Trenches" The subcaption reads "Saxons and Anglo-Saxons fraternising on the field of battle at the season of peace and goodwill: Officers and men from the German and British trenches meet and greet one another—A German officer photographing a group of foes and friends." (The Illustrated London News/Wikimedia Commons).
SHARE

It’s a famous story. In the first winter of World War I, in new trenches on the Western Front, British and German soldiers were starting Christmas celebrations and singing carols. They start to compete with each other, which turns into a shared festive spirit. Soon they’re laying down arms, walking across no man’s land to trade alcohol, cigarettes and general Christmas pleasantries. Soon after, a soccer ball — or football, as the Europeans call it — shows up and rival armies are having a friendly match. The whole event is a moment of fraternity and understanding, away from the machinations of warring governments. It’s so understanding, that when it’s over, troops are moved away and punished for socializing with the enemy rather than fighting them.

Alongside the horrors of Verdun and the Somme, the ‘Christmas Truce; has become one of the most storied parts of World War I. It’s also far more complex than the narrative lets on.

There was a truce on Christmas that year — in fact there were several, across various sectors stretching down the length of the trench lines of the Western Front. However, the situations were not special outbursts of international comradery but rather matters of practicality. Christmas 1914 was still early in the war. The armies on both sides of the Western front were by and large not filled with fresh-faced draftees but professional soldiers who had been quickly mobilized. That was most true with the British forces, known as “Old Contemptibles.”

Truces were not a shocking display of fraternity between soldiers, but practical matters, according to World War I historian Simon Jones. The quick descent into trench warfare also saw both sides unusually close to one another over a long period of time, making any middle-ground meeting much easier.

“You can absolutely see it in the context of siege warfare throughout the ages,” Jones said. “[In] protracted position warfare, you want to make yourself comfortable. Fraternization is an inevitable part of siege warfare, it applied to the French and Belgians as well.”

Small, informal truces were common after the war broke out, mostly for each side to collect and bury their dead. Heading into Christmas, fighting had been very heavy, particularly along part of the line near Ypres in Belgium. The aftermath of the First Battle of Ypres left many dead going into winter. A burial truce was put in place Dec. 19, which extended in parts before Christmas Eve, when wider truces were agreed on for the holiday.

When it became clear that the holiday would be free of violence, some soldiers in the trenches were bemused and happy. Soldiers wrote about the guns falling silent and encountering enemy troops, and after the war, those letters as well as veterans’ accounts were collected for posterity. The Imperial War Museum rounded up several of those first-hand records. One of those was from British Pvt. Marmaduke Walkinton, who described the moment:

We were in the front line; we were about 300 yards from the Germans. And we had, I think on Christmas Eve, we’d been singing carols and this that and the other, and the Germans had been doing the same. And we’d been shouting to each other, sometimes rude remarks more often just joking remarks. Anyway, eventually a German said, ‘Tomorrow you no shoot, we no shoot.’ And the morning came and we didn’t shoot and they didn’t shoot. So then we began to pop our heads over the side and jump down quickly in case they shot but they didn’t shoot. And then we saw a German standing up, waving his arms and we didn’t shoot and so on, and so it gradually grew.

Along with singing and exchanges, there were also some joint burial ceremonies, Jones said. Historian Terri Blom Crocker, author of the book The Christmas Truce, noted that several records of the truce had soldiers nervous and distrustful about meeting with their German enemies.

Other conditions played a part in the outbreak of Christmas truces. That year saw the worst winter of the war. Trenches had been quickly made across Europe, but these were more hasty affairs than the intricate and more heavily fortified trenches that would come as the war picked up from wider mobilization and stalemate. When Christmas arrived, it was cold and wet. A pause in the fighting gave soldiers time not only to move around and warm up, but to improve the conditions of the trenches.

As for the most famous part of the truce, there were not widespread games of football between British and German forces. There is some truth to the story, according to Crocker, but it’s less tied to Christmas. Soldiers at the time were avid footballers and there would be attempts at games in truces prior to the 1914 Christmas one. Crocker noted that in many cases, soldiers participating in the truces wanted to have matches, but the ground was too destroyed or no one had a football on them. Jones said that there is a documented football match on Christmas, in Flanders, but that it was something of an impromptu scrum rather than a coordinated regulation game.

There was not widespread punishment for fraternizing, unlike the usual version of the Christmas Truce story. Crocker wrote in The Christmas Truce that ceasefires were reported to commanders higher up in some cases. There were no grand relocations of units to prevent a halt in hostilities or mass court martials. British and German veterans later wrote about occasional punishment from specific officers, but nothing points to a policy from high command for not fighting on Christmas.

But the truces were temporary and only went so long. British soldier George Ashurt told the Imperial War Museum how it ended:

We got orders come down the trench, ‘Get back in your trenches every man,’ by word of mouth down each trench; ‘Everybody back in your trenches,’ shouting. The generals behind must’ve seen it and got a bit suspicious so what they did, they gave orders for a battery of guns behind us to fire, and a machine gun to open out and officers to fire their revolvers at the Jerries.  ‘Course that started the war again. Ooh we were cursing them to hell, cursing the generals and that, you want to get up here in this stuff never mind your giving orders, in your big chateaux and driving about in your big cars. We hated the sight of the bloody generals.

The war grew worse the next year. Major operations and battles not only saw casualties spike, they also caused bitterness and resentment to rise. By the end of 1915, the Allies on the Western Front had suffered 1,932,051 casualties, according to the official French records. The Germans had lost 2,597,032 across all fronts, counting dead and wounded plus prisoners and missing soldiers, per German logs. When Christmas arrived, no one was particularly eager for fraternizing. German officers gave orders against such a truce, saying it would be seen as treason.

At the time, news of such truces ran against wartime propaganda. Jones said that the kind of All Quiet on The Western Front-style view of the war — that it was a senseless, tragic loss of life — hadn’t taken hold. That only came years after the fighting ended. Even in 1914, Jones said, these slightly older, more professional soldiers were full of patriotism and believed their own nation’s arguments for why the war had started.

“There’s a case where [a British] officer said ‘if we talked to the Germans and explained why the war is going on, they’d see reason,’” Jones said. “Both sides were fixed in on what they saw to be the causes of the war, they believed the other was to blame. Talking to each other didn’t change them.”

Nor was there a widespread movement or belief that if the soldiers could have kept a dialogue going that it would have ended the war, at least at the time. Reports and records from the 1914 Christmas Truce viewed it as a welcome reprieve for a holy day, or a peculiarity, not but a chance for a peace via pacifism. Jones noted there was a soldier-turned-parliamentarian who did claim that could have been the end of the war, but he said that only once in office in the 1930s.

Jones added that soldiers who participated in the truce didn’t suddenly become pacifists. In fact, as the war later escalated, so did bitterness between sides. In later cases near the war’s end when soldiers did start mutinying and stating opposition to combat, it was not from fraternization with the enemy, but from poor conditions on their own side. That ranged from rebellions in Germany and Russia to riots at British training camps over hard rules and lack of leave.

It was only after the war was over that the truce took on a wider role in the public’s view of the Great War. But at the time, in the cold and wet trenches of the Western Front in 1914, the halt in the violence was more about practicality than any grand ideal.