"It’s surreal to think ‘oh wow that's actually what we did in the moment.’” 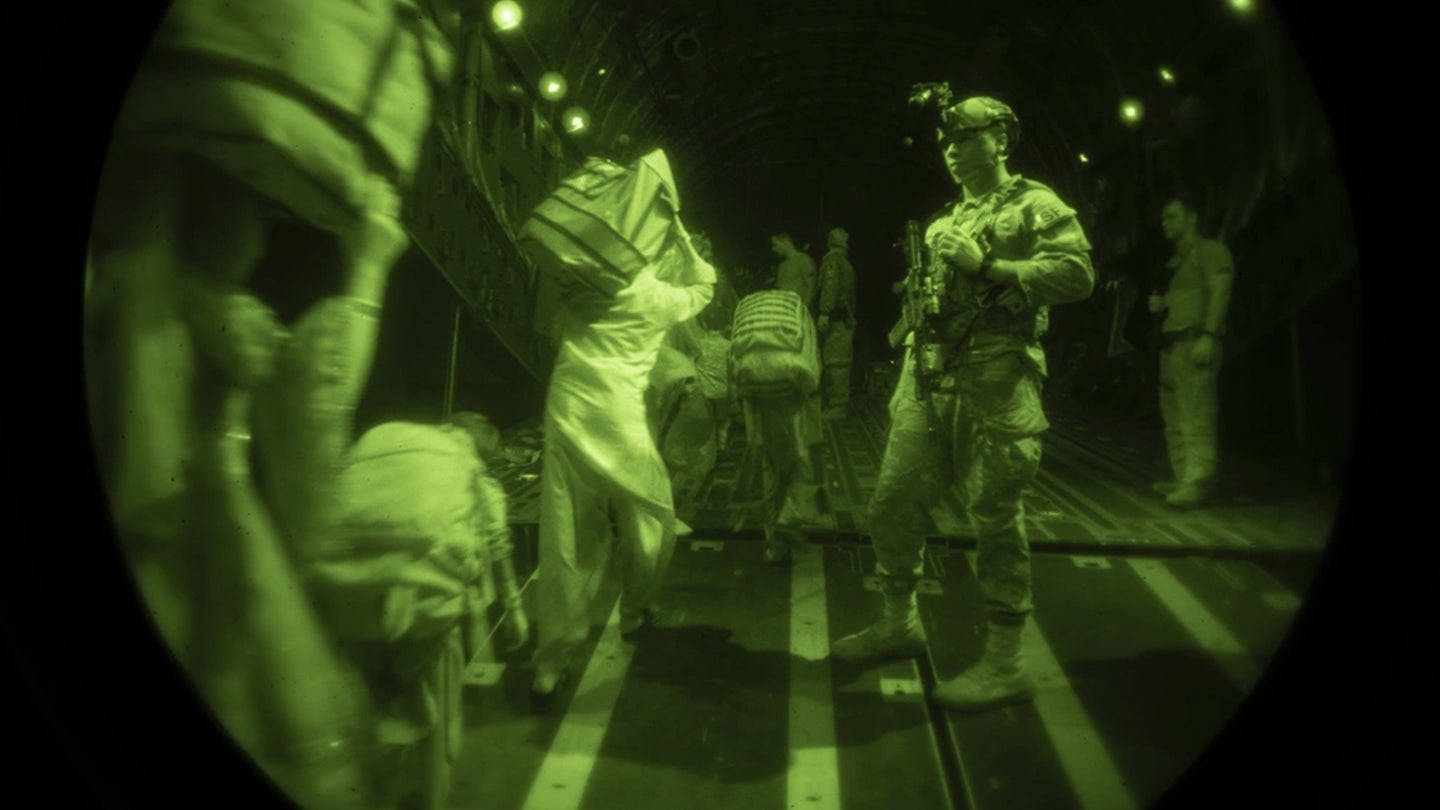 Many airmen are familiar with the saying “regulations are written in blood,” which reminds them to follow safety regulations or suffer the consequences. But in extraordinary circumstances, sometimes the safety regs must be put aside in order to accomplish the mission. The crew of the Air Force C-17 transport jet callsign Reach 651 found themselves in such circumstances while in the air over Al Udeid Air Base, Qatar on Aug. 22, 2021.

“It is completely against protocol,” Senior Airman Kimberly Heiser told Task & Purpose about what she and her crew had to do that day. “That is not something we’ve ever done.”

It was in the middle of Operation Allies Refuge (OAR), the massive U.S. military effort to evacuate more than 124,000 people out of Kabul, Afghanistan during the last days of the United States’ longest war there. Heiser and the seven other airmen aboard Reach 651 received the Distinguished Flying Cross at Travis Air Force Base, California on Friday for their efforts during the operation.

Reach 651 was among more than a hundred other C-17 crews charged with moving the evacuees, often by squeezing 450 or more people on each flight.

The security situation was tenuous: intelligence analysts warned the aircrew that there could be an imminent attack on the airfield at Hamid Karzai International Airport in Kabul, possibly in the form of suicide bombers. In response, the airmen aboard Reach 651 followed procedure by searching every evacuee prior to boarding. Each airman had a role: Staff Sgt. E-Quantay Mason and Airman 1st Class Jeremy Eda were “ravens,” the term for security forces airmen (the Air Force equivalent of military police) who undergo special training to provide security on Air Force aircraft.

The ravens and other aircrew searched the evacuees, who were then guided to their places on the cargo bay deck by the loadmasters, Heiser and Senior Airman Matthew Williams. During OAR, airmen laid down a tarp on the cargo deck for evacuees to sit down on and hold onto cargo straps that Heiser and Williams had laid out in rows across the deck. There were more than 450 passengers onboard, including dozens of parent-less children.

For perspective, the C-17 cargo compartment has about 1,584 square feet of space, which meant each passenger had less than 3.5-square-feet of space: about 2-square-feet fewer than what passengers can expect in economy seating aboard many commercial airliners, according to the Michigan Journal of Economics. However, unlike commercial airliners, there were no seats for evacuees aboard the C-17, no individual air conditioning vents and only one small lavatory at the nose end of the compartment.

“Most jets only had one bathroom so some people used the cargo floor,” one C-17 pilot told Task & Purpose shortly after OAR. “I don’t blame them. Terrible set up.”

The comparison to commercial airliners, which many Americans already find a stressful experience, is meant to highlight the challenges both evacuees and airmen faced during OAR. A massive cultural and linguistic gap between the airmen and their passengers made the situation even more difficult. While there was an interpreter aboard Reach 651, Heiser said she did not have the best grasp of English, and the passengers did not take her seriously because she was a woman.

“It was a struggle to have our interpreter respected or even heard,” she said. “As a female crew member, I also was not treated very well, and it’s again a cultural difference.”

The conditions and the cultural differences came to a boiling point when Reach 651 arrived in the airspace over Al Udeid Air Base, Qatar. There were so many aircraft landing at the air base that it caused a traffic jam in the sky, with planes like Reach 651 having to hold in the air “for as long as possible,” according to Capt. Audrey Imperial, the master of ceremonies at the award ceremony on Friday.

But there was a problem: Reach 651 was running out of gas. The aircrew flew the jet towards an aerial refueling tanker, but on the way, a passenger who Imperial described as “a 16-year-old mother,” began convulsing and soon fell unconscious. Heiser recalled being in the cockpit when she heard Williams notice a crowd of people gathering at the back of the cargo compartment.

“They seemed distressed,” Heiser said. “That’s when I ran downstairs and tried climbing my way past people.”

The airmen needed some space to try to stabilize the woman, so the aircraft commander, Maj. Drew Dela Cruz, gave them permission to carry her upstairs into the cockpit. This was a major breach in protocol, but there was no other choice, Heiser explained.

“It’s definitely frowned upon,” she said. “But given the condition of the woman, we had no other option, especially with the men getting agitated.”

It may have been more difficult for the passengers to understand what was happening due to the language and culture barrier.

“They just saw one of their own going up and convulsing and unconscious,” Heiser said. “I think that, the fear from everything and then the language barrier, just contributed to so much stress.”

One thing may have helped ease the tension: Heiser herself. Female U.S. service members played a key role throughout the war in Afghanistan because they were often the only ones who were allowed to speak with Afghan women under local cultural rules. Female Engagement Teams collected intelligence, coordinated medical care for women, and, when the shooting started, fought and died alongside their male peers patrolling with them. Heiser was the sole female member of the aircrew aboard Reach 651, and the situation could have been worse without her there.

“I’m grateful that a woman was on the crew,” she said. “I think it would have gone a lot differently if one of the men were forced to administer aid.”

Even so, two Afghan men “aggressively forced their way to the front of the cargo compartment and attempted to gain entry into the flight deck,” Imperial said. One of the loadmasters, Senior Airman Williams, pulled away one man while one of the ravens, Staff Sgt. Mason “physically restrained the other man at the bottom of the stairs.”

The fact that the airmen used nonlethal force in such dangerous circumstances was its own act of valor, Imperial said.

“The decision to not use lethal force to protect the cockpit demonstrated an extraordinary restraint by the aircrew, as they were briefed to use all means necessary to prevent Afghans from gaining entry to the flight deck,” she said. “This action protected the lives of the aircrew, the safety of the aircraft and the lives of all 450 passengers floor-loaded on the aircraft.”

“I am extremely proud of my crew for their tireless efforts throughout the mission to ensure the flight deck was secure,” the C-17 pilot said in a press release. “The extremely good judgment they used and their calculated actions during chaos was crucial.”

Meanwhile, inside the cockpit one of the pilots, 1st Lt. Ryan Corvin, barricaded the door, and one of the aircrew stood ready with a service pistol in case of a breach, Imperial said. Heiser was focused on her unexpected role as caregiver for the young mother, who was still convulsing.

“I was trying to hold her down and I didn’t really have a thought in my mind about what was happening downstairs,” she said. “My goal was to make sure she was okay.”

Heiser did not know exactly what malady the woman was suffering from, though she and her crewmates believe it was heat stroke. Heiser removed some of the woman’s clothes to try to cool her down while the interpreter tried to ease the tension outside the cockpit. She assured the evacuees that the woman was receiving medical care and urged them to remain calm.

Given the tense security picture and the 16-year-old’s unstable condition, Dela Cruz declared a medical emergency and took the C-17 down for a landing. The problems did not end with the flight, however. Since the airfield was so crowded with planes, the crew received “multiple unsafe taxi instructions,” that could have put the aircraft in danger, Imperial said. One of the pilots, Maj. Alexander Arcidiacono, managed to coordinate a safe route that also led to medics boarding Reach 651 faster. They whisked away the mother, but the rest of the passengers and aircrew had to settle in for a long wait in the traffic jam in a desert air base in late August.

“The loadmasters provided bottles of water, but tensions began to rise as heat inside the aircraft rose towards 100 degrees Fahrenheit,” Imperial said. “The passengers began yelling, causing alarm among the security forces on the ground.”

Imperial said the crew of Reach 651 worked fast to coordinate with nearby security and logistics troops so they could offload the remaining passengers. In a situation rife with stress and uncertainty, where even the most fundamental rules had to be broken, the crew’s experience working together throughout OAR likely helped avert disaster.

“It was definitely hard, but we understood our personalities enough to keep each other calm, and that kept most passengers calm in return,” Heiser recalled. “I think, having one another there and these familiar faces …. you’re able to calm each other down. Definitely grateful for the crew I was granted.”

Still, Heiser regrets never finding out what happened to the young mother she found herself caring for.

“I think that was the hardest part of all this, just helping all these people out, seeing them in distress for a few hours and then never seeing them again,” she said “I hope she’s okay. We never found out. It was just so chaotic.”

“In the moment you don’t really think about it: You’re just doing your job, you’re just trying to help a woman in distress out, you’re just taking every task one by one,” Heiser said after the ceremony on Friday. ”Now listening to the citation, it’s surreal to think ‘oh wow that’s actually what we did in the moment.’”