"We bring the full hospital to the patient.” 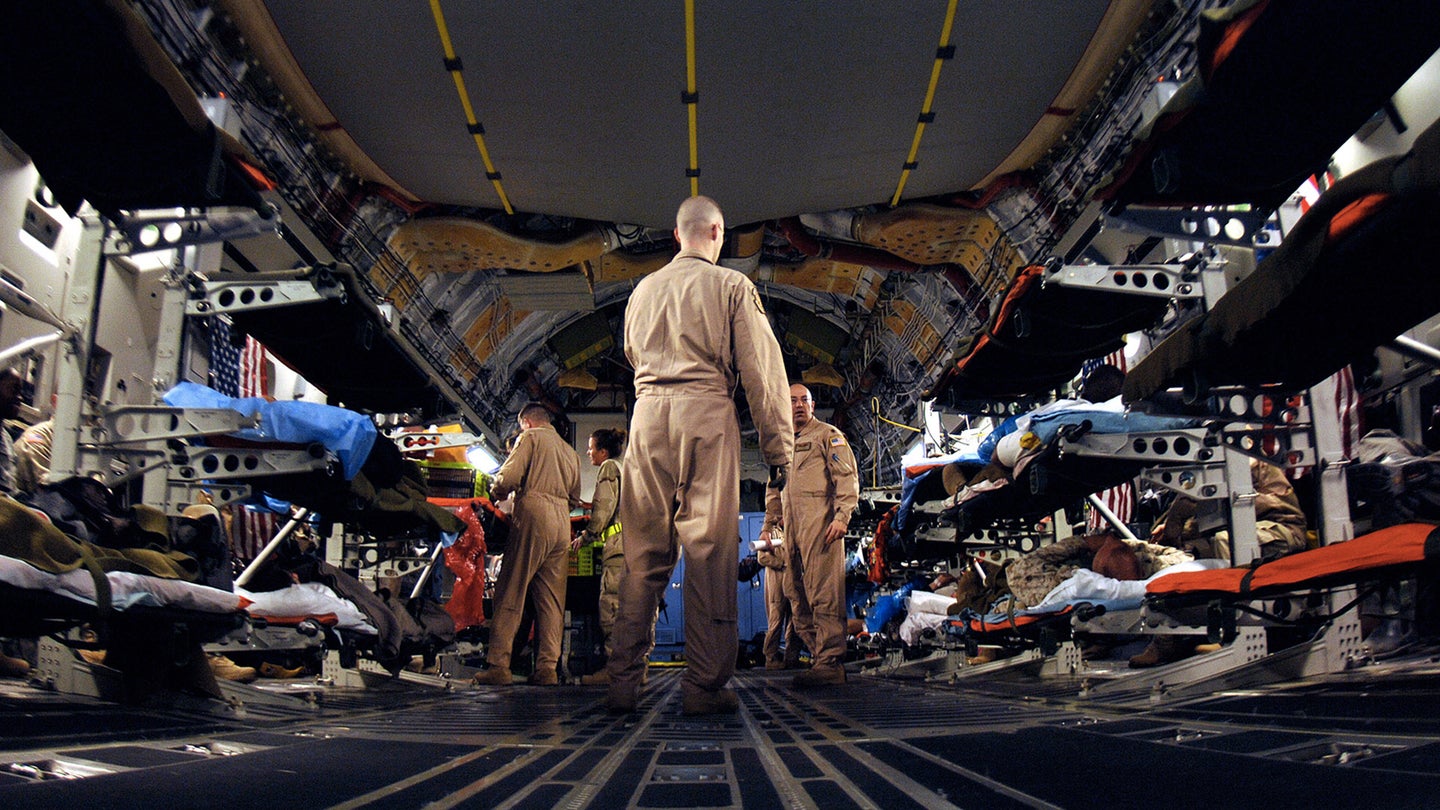 One of the U.S. military’s most hard-working airplanes is the Air Force’s C-17 Globemaster III transport jet, the four-engined workhorse that can do anything from haul a tank to drop bombs.

But one of the C-17’s most important missions does not involve taking troops and supplies to the fight: instead, it involves taking injured service members and civilians away from the fight as quickly and safely as possible. That task falls to aeromedical evacuation crew members, the experts who can turn an Air Force aircraft like the C-17 or the C-130 into a flying hospital to get the most critically sick or wounded patients safely to higher care.

The contributions of aeromedical evacuation airmen were recognized last week when Capt. Jedd Dillman, a flight nurse, and Master Sgt. Matthew Newman, a respiratory therapist, became the first aeromedical evacuation aircrew members in the history of Air Mobility Command to receive the Distinguished Flying Cross, according to the Air Force. The award recognized their contributions to Operation Allies Refuge, which saw more than 124,000 people evacuated from Kabul in August 2021.

Like in any career field, the right set of tools can make a world of difference. And when it comes to aeromedical evacuation, there are few tools better than the C-17.

The ‘Moose,’ as the jet is sometimes called, “is big, bright and spacious with many built-in amenities such as medical-grade oxygen and buttons patients can push to call for assistance,” Air Force Brig. Gen. Kathleen Flarity, mobilization assistant to the Air Mobility Command Surgeon, said in a 2019 press release.

Each aeromedical evacuation mission is different, the press release said, but the C-17’s ample space, built-in attachments for central oxygen, and electrical systems allow medical airmen to reconfigure the cargo bay to suit the needs of up to 74 patients. Those configurations can include setting up stanchions for bearing litters; intensive care units for infants or newborns; or even an operating room for trauma patients.

“We bring the full hospital to the patient,” said Maj. David Matteson, an anesthesiologist with the 59th Medical Wing, in a 2016 press release.

Besides space and light, C-17 cargo bays are also pressurized, with working heat, air conditioning and, perhaps most important in a military operation, “the ability to serve warm coffee,” according to the 2019 press release. One C-17 pilot explained that there is a hot cup in the galley for making instant coffee, but it is not uncommon for airmen to bring a portable coffee maker to plug into the wall because the hot cups break easily.

“I used to be an energy drink guy, but as I’ve gotten old … coffee keeps me fueled when flying long haul,” the pilot told Task & Purpose.

The C-17’s ability to fly long haul at a cruising speed of 517 miles per hour also makes it an ideal choice for getting patients across vast distances, such as from Afghanistan to Landstuhl Regional Medical Center in Germany, or from Germany to hospitals in the United States. These long flights can be a challenge for both the aircrew and medical crew as the needs and conditions of a severely hurt patient change throughout the journey.

Those challenges came to light in July 2007, when an Army military policeman named Sgt. Dan Powers was stabbed in the head with a nine-inch knife while on patrol in Baghdad, Iraq. U.S. forces in Qatar scrambled a C-17 to fly to Iraq, pick up Powers and fly him 14 hours to surgeons in Washington D.C., a highly irregular voyage since it required planning out two aerial refuelings, according to a 2012 Smithsonian Magazine article.

Accompanying Powers was a seven-member critical care air transport team, a highly-specialized team that includes physicians, nurses, and other specialists who can keep the patient alive during the flight. The C-17 pilot “was told to avoid turbulence,” and to set the cabin pressure to an altitude of just 4,000 feet above sea level, Smithsonian Magazine reported. Though cabin pressure is usually close to 8,000 feet, the lower level was meant to prevent Powers’ ruptured blood vessels from reopening, to keep his brain from swelling further, and to keep tiny pockets of air trapped in his head from expanding. But it also meant the pilot would have to fly the airplane below 26,000 feet, about 10,000 feet lower than usual, and right into a thunderstorm. Flying through thicker air at lower altitudes also means the giant C-17 burns more gas.

“The biggest issues that pilots must deal with in evac scenarios are time and fuel,” Maj. Corbett Bufton, the C-17 pilot, told Smithsonian Magazine. “As far as time, we made sure that all air traffic controllers were aware that we were a time-critical medevac, and we were given priority.”

Luckily, it all worked out, and just 20 hours after being stabbed, Powers touched down in Maryland and was rushed to the Naval Medical Center 20 miles away. He made a full recovery, and two years later he even performed a parachute jump with his old unit.

Powers’ dramatic flight across the ocean was one example of the long-distance aeromedical skills that the U.S. military honed during the Global War on Terror. Now the C-17 can bring a wounded service member back to the U.S. in three days or less, when it used to take 10 days, the 2019 press release said.

Beyond transporting service members, the jet also has a long history of transporting civilians injured by or fleeing from natural disasters like 2017’s Hurricane Maria, or from conflict zones such as Afghanistan last year. In 2018, one C-17 aircrew even worked in negative 65.2 Fahrenheit conditions to evacuate two patients from The National Science Foundation’s McMurdo Station in Antarctica.

“It was so cold that we weren’t able to open up the back of the aircraft, so the patients were loaded through the crew door, which is located on the front left side of the aircraft,” Tech. Sgt. Seth Lewis, a loadmaster with the 7th Airlift Squadron, said at the time.

Going anywhere to pick up anyone in need is part of what makes the C-17 a symbol of hope for many people saved by it. A detachment commander with the 18th Aeromedical Evacuation Squadron found that out himself when an improvised explosive device detonated in Afghanistan in 2012.

“[W]e were able to land in Bagram Airfield and move those affected quickly and safely and get them to Landstuhl for advanced care,” Maj. Steven Radaker said in the 2019 press release. “We were able to set these patients’ minds at ease after such a traumatic event. The 18th AES, along with the C-17 aircrew, showed these patients that they can depend on us getting to them quickly and providing the critical care they need.”