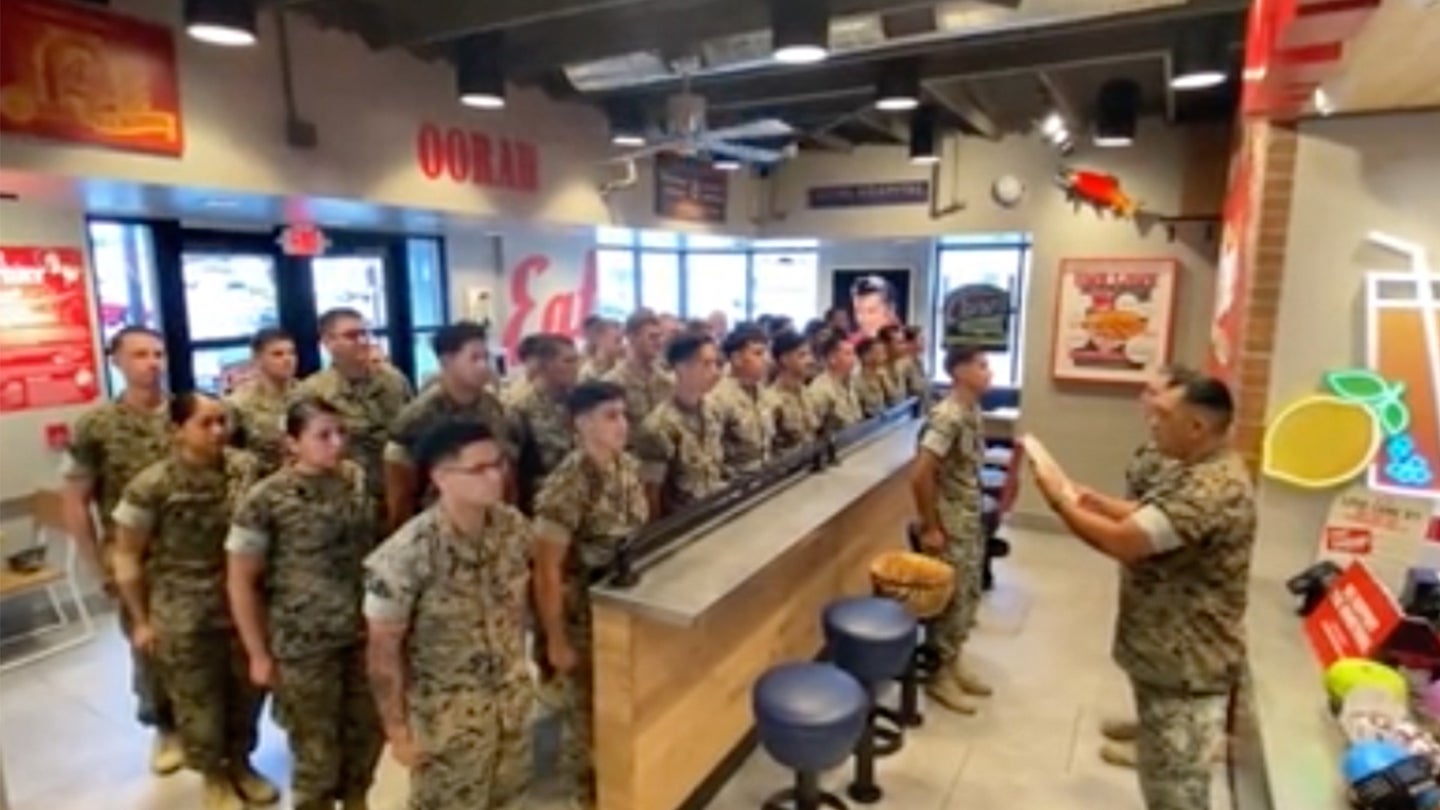 You only get one chance to be promoted to a Marine noncommissioned officer, so it makes sense that you’d want it to be a bit of a special occasion. And you might want a special location for that special occasion — like a fried chicken restaurant.

That’s apparently what a member of Combat Logistics Battalion 13 at Camp Pendleton, California decided for his Nov. 1 promotion to sergeant:

With an entire platoon standing at attention behind him in the Raising Cane’s fried chicken restaurant on base, this Marine swore to “execute the duties and responsibilities of a sergeant.”

The camera pans over to behind the counter, where one employee is casually observing while the rest are presumably busy at work frying chicken — plenty of which would be needed if the entire platoon is sticking around for lunch.

Getting promoted inside a Raising Cane’s is not exactly the same as, say, this Marine scout sniper being promoted to sergeant while standing chest-deep in cold, fetid swamp water. But, again, this is a logistics battalion.

No matter how austere the conditions, U.S. service members have always been known to show some creativity with their promotion and reenlistment ceremonies. Like dressing up as Star Wars characters, which is something that seems to span all ranks, including general officers in the Space Force. Or at a GameStop, which presumably prompted much head-shaking.

This propensity for theater has occasionally put service members in trouble. In 2018, a Master Sgt. in the Tennessee Air National Guard took her oath of reenlistment with a tyrannosaurus rex hand puppet mouthing the words. That little stunt apparently went “against our entire foundation,” according to the Air National Guard’s commander, and ended with the colonel who administered the oath being immediately retired with the rank of lieutenant colonel, the noncommissioned officer who took the oath being removed from her full-time position, and the noncommissioned officer who filmed the whole thing being removed from his position as a first sergeant and receiving an official reprimand. Talk about an overreaction.

There were, fortunately, no hand puppets present for this promotion ceremony, and only one person can be seen walking into the restaurant during the ceremony, so hopefully this wasn’t during the lunch rush. So, we salute the Marine who chose arguably the best fast-food fried chicken spot in the country for his promotion — and if everyone in that formation tried to place an order afterward, we salute the restaurant workers, too.

Where’s the best place you’ve seen someone get promoted? Let us know in the comments below, on social media, or email max.hauptman@taskandpurpose.com.