Blue Angels and brrrrt, silkies and squad bays...we have it all 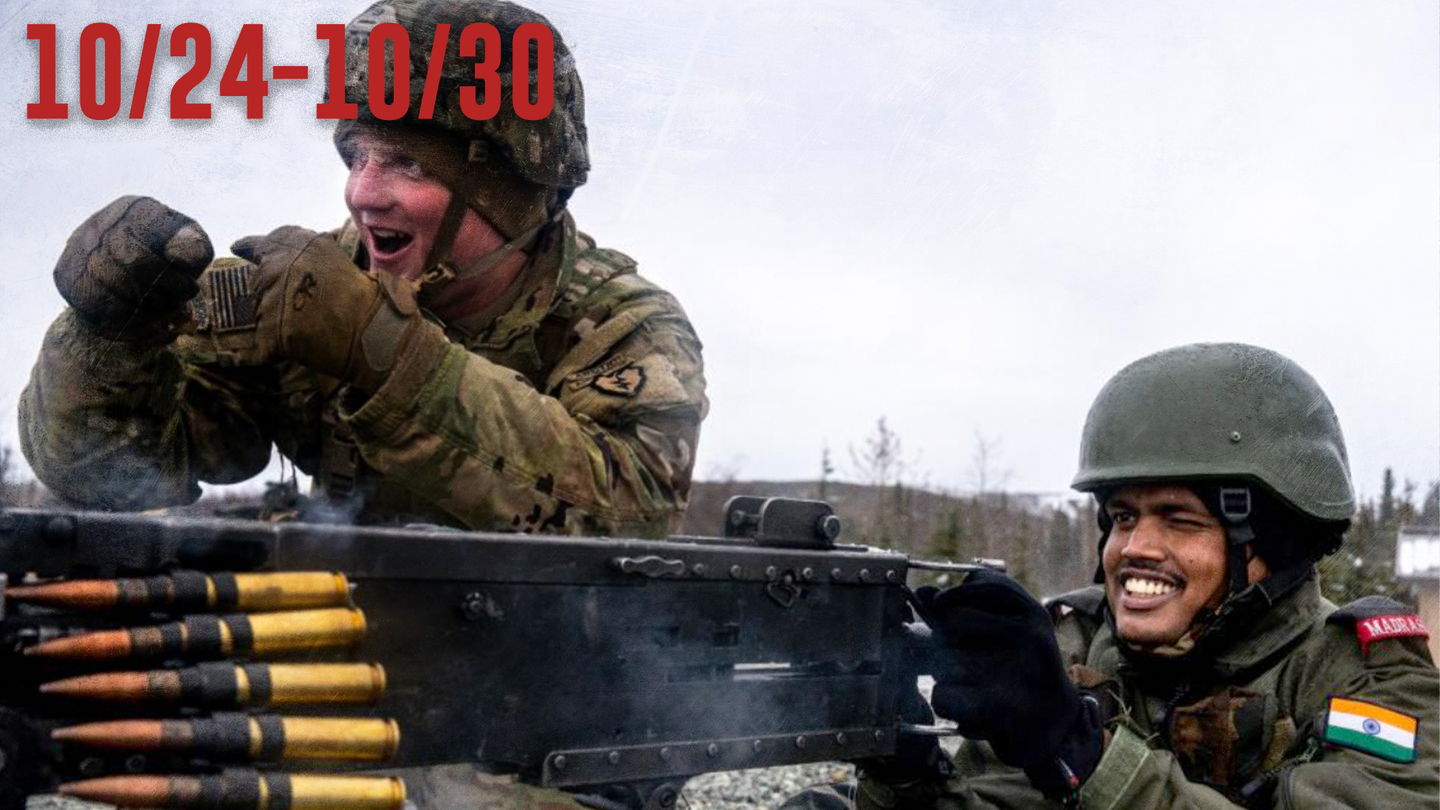 The US. Military takes a ton of photos, and there’s no way anyone has the time to sort through them all. So we collected the best military photos we saw in the past week and are sharing them here. And who knows, we might even sprinkle in a meme here and there. Without further adieu, let’s get to it.

From DVIDS Hub, this image is just pure joy. We see a U.S. Army soldier with the 4th Infantry Brigade Combat Team (Airborne), 25th Infantry Division showing an Indian compatriot the finer points of employing the M2 Browning .50 caliber machine gun. You can hear and smell this picture. Anybody who has ever had the pleasure of depressing that butterfly trigger can attest that the smiles are impossible not to have. (Until you have to police call all that brass.) It is so choice. If you have the means, I highly recommend picking one up.

Speaking of hearing and smelling a picture. This photo posted to Reddit is apparently a squad bay in Marine Corps boot camp belonging to Alpha company on Parris Island, South Carolina, in 2007. This appears to be on their last day as all their bags are packed, and most importantly none of the footlockers are locked. The racks (beds) are still as tight as ever, besides the one in the immediate front, but their footlockers aren’t centered on the rack either indicating a shitbag occupied the space. Nasty little worms.

This picture might have the highest concentration of brrrrrrt (the sound the gun makes to everyone but the target) in the history of mankind. Posted in a gallery by u/blountforcetrauma on Reddit, I count 30 A-10 “Warthogs” in all. If they’re loaded with all the 30mm ammo they can hold (which they most certainly aren’t but we can dream can’t we) there are 40,500 rounds here. Can you believe the Air Force actually wants to get rid of these?!

The Blue Angels are just cool, and they’re even cooler flying over Denali, Alaska (get it, because it’s cold) in this photo posted on DVIDS. They even look badass just filling up with gas from this KC-135, holding a formation so tight it looks like there might be a glitch in the Matrix. If there are any Blue Angels aviators reading this, we would like a ride, please.

Just guys being dudes, living in the moment, not a cell phone in sight. This shot, posted to Reddit, reportedly shows Marines in Afghanistan. Those of you with a keen eye will notice that one of these Marines is not like the others as he sights in his M4 with an M203 grenade launcher on whoever disturbed him. Donning just “silkie” shorts, plate carrier, and Kevlar helmet, we can only wonder what he was up to just moments before.

The last one is a meme. This was posted to the unofficial U.S. Navy subreddit but is universal in the military. This great lie has been constant in the U.S. military since 1775, predating the country itself. Anthropologists and military historians could probably argue it dates back to the Assyrians who were the first professional military, making this lie and phallic images being left behind the oldest traditions in any culture. Have you even really served if you haven’t heard somebody in your chain of command say “Once we get this done, we will get you out of here” to get the task done and still sit around throwing rocks at other rocks for a few hours?

There are plenty of other fine pictures and memes out there, and we share a lot of them on our Twitter, Instagram, and Facebook pages. So if you don’t already, go ahead and follow those. We also want to see your pictures and feature them here, so please send your best to kyle.gunn@taskandpurpose.com or slide them into our DMs on social media. Or as always, drop a comment below!