“Even if you go once, you did more than most." 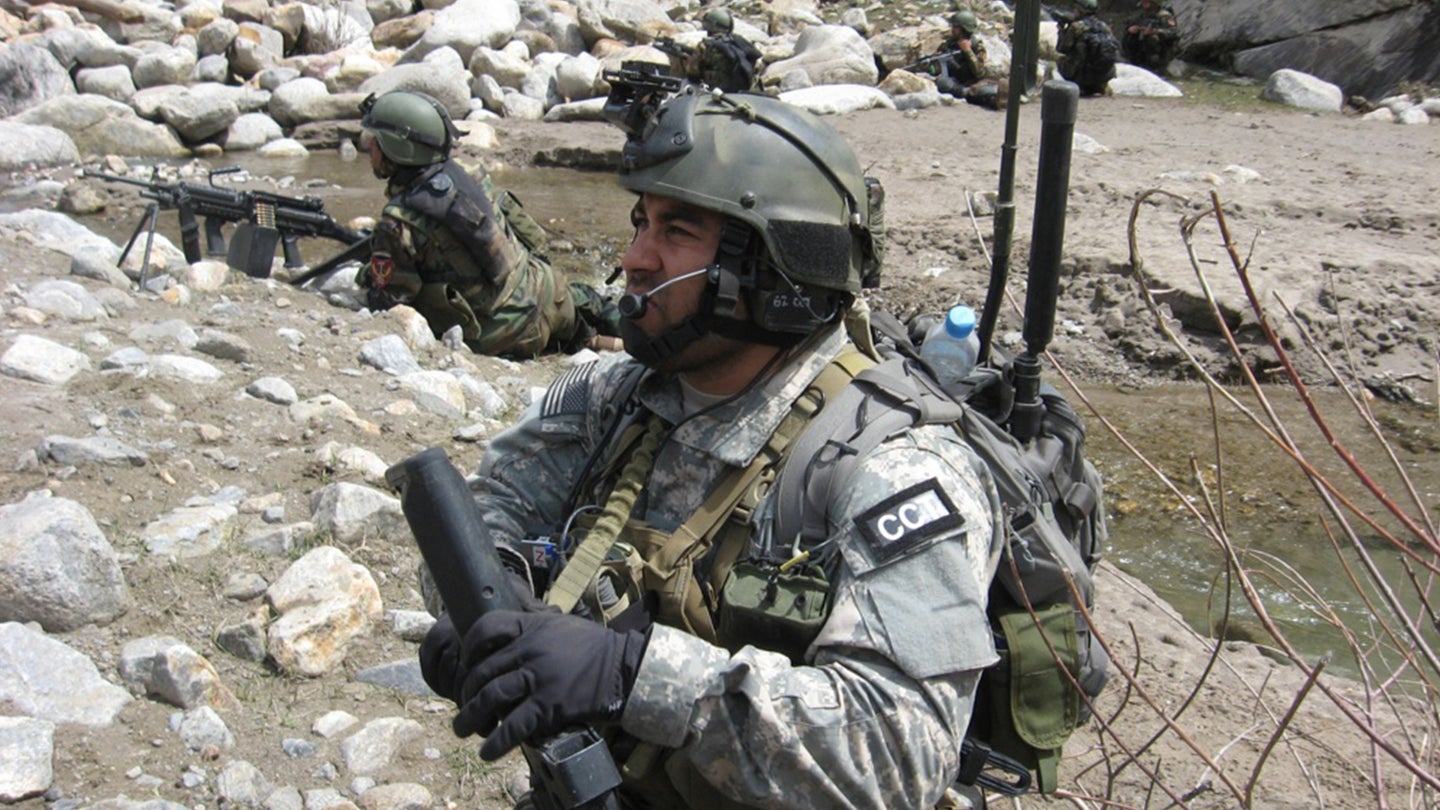 Staff Sgt. Robert Gutierrez Jr. keeps a watchful eye out for insurgents or threats to his operational detachment team during one of many patrols he took part in while deployed in support of Operation Enduring Freedom. (DVIDS / Courtesy photo).
SHARE

There are badasses, and then there’s Senior Master Sgt. Robert Gutierrez Jr., an Air Force combat controller who received the Air Force Cross after a desperate firefight in Afghanistan in 2009 where he continued to fight and call in airstrikes despite being shot through his lung.

“I realized he was shot after the third (and final) strafe pass,” said Capt. Ethan Sabin, an A-10 attack plane pilot who worked with Gutierrez during that firefight. “He said he would be off of the ‘mic’ for a few to handle his gunshot wounds. Until that point he was calm, cool and collected.”

Gutierrez is a rock star in the Air Force Combat Control (CCT) community, whose members set up landing zones and call in airstrikes alongside Army Special Forces, Navy SEALs, and other special operators. But you wouldn’t know that from hearing him talk. In fact, in a video about Gutierrez posted on the Air Force Special Tactics Facebook page on Tuesday, he refused to even say how many deployments he’s been on.

“I got a couple,” he said in the video. “Me personally, I don’t really like to talk about how many times I went here or there … because even if you go once, you did more than most.

“I just don’t want to devalue someone that’s been there once or like 11 times or nine times,” Gutierrez added. “I’ve got friends of mine that are controllers that, man, I can’t even count the numbers, you know? So I always look at it as: you get the opportunity, you go, and that’s it.”

The CCT’s humble remarks are in line with others he has made in the past.

“I don’t care if I get an award or not,” he said in 2010, before he was awarded the Air Force Cross, which is second only to the Medal of Honor in prestige. “The team was outstanding. I’m just a product of what I’ve been taught and a product of [Air Force Special Operations Command].”

If Gutierrez is any indication, those products are extremely high-quality. On the night of Oct. 5, 2009, he and a team of 30 Army Green Berets and Afghan National Army commandos were surrounded in a “Taliban-sympathetic village” in the Herat province in northwestern Afghanistan.

They had been on their way to capture or kill a “high-value target,” according to Air Force Magazine, but Taliban forces were prepared for the special operations team’s arrival. The road leading to the village was littered with improvised explosive devices, so the team made their way to the village on foot, where they immediately started taking fire from rifles and heavy machine guns.

Gutierrez and his teammates took cover, but several team members had already been wounded by bullets or shrapnel. They needed air support to stay alive, and they needed it now. As a CCT, Gutierrez was among the best in the world at bringing that in. The two-year CCT training pipeline, which historically washes out 70 to 80% of its candidates, includes both commando training and a course to become a Federal Aviation Administration-certified air traffic controller.

“Nobody knows about us, even though we kill more people on the battlefield than anyone in the history of human warfare,” retired Air Force CCT veteran Dan Schilling told Task & Purpose in June. “What CCTs do is they stitch everything together, and they determine whether everyone on the battlefield lives or dies.”

But there was a problem: Gutierrez was shot, too. The CCT was firing at enemy fighters when he was hit, though he did not stop firing “until the pain in his side and arms overwhelmed him,” according to Air Force Magazine.

“Every time I tried to talk, I had blood coming out of my mouth and out of my nose, so I knew that I had been wounded pretty bad,” he said in the article.

Though Gutierrez did not know it at the time, a bullet had entered his left shoulder, penetrated his lung, then left through his back. It was a sucking chest wound, meaning the airman’s chest cavity was filling with blood and collapsing his lungs.

“I’ve seen those types of injuries before and time isn’t your friend,” Gutierrez said. “I thought: I have three minutes before I’m going to die. I’ve got to do something big. Based on that time frame, I’m going to change the world in three minutes.”

The team was surrounded, but the enemy fighters were so close (just 10 meters away) that any rockets or bombs launched by aircraft would kill friendly forces too. The only thing that would work was a 30mm high-angle strafe from Sabin’s A-10 attack plane overhead.

The CCT went through the process of calling in the airstrike, which involved repeating himself a few times for the pilot, who was in disbelief that Gutierrez wanted a gun run so close to friendly forces. The whole time, the CCT was still pulling security and getting worked on by the team medic, Mike.

“All this time, Mike’s got my kit completely open and he’s going to work like a mad scientist on me,” Gutierrez said. “And I’m shooting, talking, I’m like ‘I can’t believe this is going on.’”

Mike had stuffed the CCT with four compression bandages, but the bleeding still hadn’t stopped. Somehow, Gutierrez managed to aim an infrared laser pointer at the enemy positions to guide the A-10.

“I finally give him [Sabin] the clearance and he just says ‘God bless you boys, keep your heads down,’ and … I mean, just on target,” the CCT said.

The 30mm rounds went exactly where they were supposed to, but by now, Gutierrez’s condition was deteriorating rapidly. The team medic stabbed the CCT’s chest with a seven-inch needle so that his lungs could reinflate and he could get back on the radio. A few seconds later, he was back to work bringing in two more gun runs that saved the team.

“As dire as the situation was, had he not been there to talk me on the target and provide controls for strikes, the team would have likely suffered more casualties,” Sabin, the A-10 pilot, told Air Force Magazine.

The team pulled out under the cover of the last run, but the retreat was almost as tough as the firefight. The area was too hot for a helicopter medevac, so Gutierrez and the others had to hoof it for about two miles to get somewhere safer. The CCT’s lung collapsed again, requiring another needle decompression. By the time they found a landing zone, Gutierrez had lost more than half the blood in his body.

“Everybody has their own push, their own internal fortitude, and I don’t have time to let anyone down,” the CCT told Air Force Magazine.

When the helicopter arrived, Gutierrez was taken to Bagram Airfield, then Landstuhl Regional Medical Center in Germany, then finally Walter Reed Army Medical Center in Washington, D.C. The gunshot wound had resulted in two broken ribs, a broken scapula, a softball-sized hole in the CCT’s back, a collapsed lung and multiple blood infections, according to the Air Force. He also had ruptured eardrums from the danger-close strafing runs. But after 19 months, three chest tubes, three blood transfusions and seven surgeries, Gutierrez was back to his old self.

“In life there’s no guarantees,” he said, when asked for advice for aspiring Special Tactics airmen in the recent Facebook video. “You just give it your all. Give it 100%. And when you’re a little bit tired, and you’re still hurting, just give it a little more.

“There is no magic formula,” he added. “It’s really about how much inside of you that you have to give.”