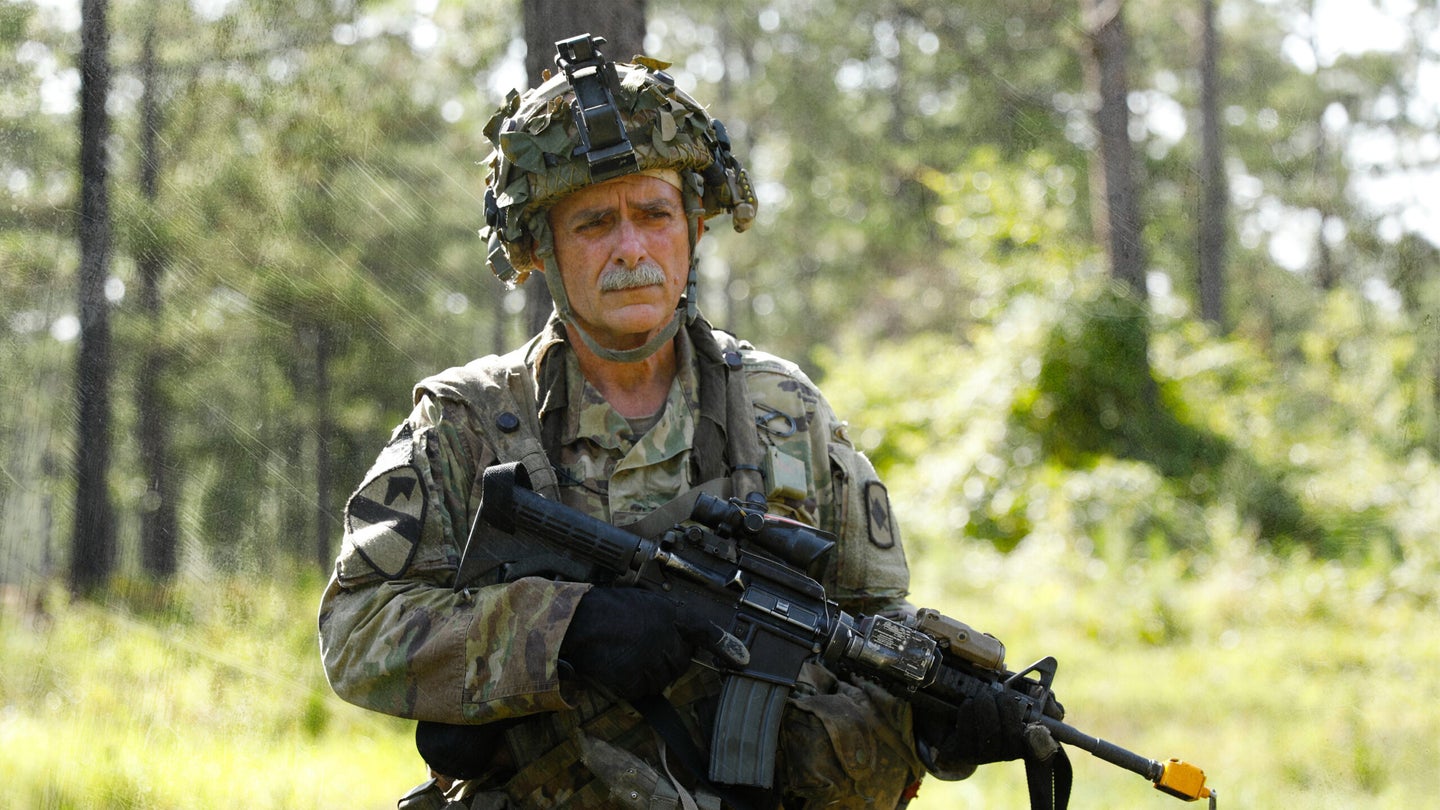 Every once in a while a photo comes along that so perfectly captures an experience that it rises to the level of art.

This photo of 1st Sgt. Kenneth Johnson with the Arkansas National Guard is that piece of art, and the experience that it captures is life in the field, and just how breathtakingly irritating it can be.

It’s there, etched upon Johnson’s face as he looks off into the distance, past the camera held by Sgt. Marie Bryant, the photographer who snapped the image. Those eyes, reflecting both the wisdom and weariness that comes from leading soldiers over a long career seem to narrow, though on what we do not know. Perhaps they’ve set upon a lone private who’s just now realized that he’s been trying to insert his magazine into his rifle’s magazine well the wrong way. Or maybe he’s watching as a new second lieutenant instructs a platoon to pour individual bottles of water into a bunch of slightly larger jugs for no good reason. Or maybe he’s just taking it all in —  the whole military experience — and wondering to himself: Why the hell did I not get out back when I had the chance? Now I’m carrying around this M4 with a damn BFA, again. And spending my weekend in the field, again

Looking like Sam Elliott’s Sgt. Maj. Plumley from “We Were Soldiers,” Johnson appears as a  man on a precipice, balanced in time between either barking obscenities at some wayward soldiers, or gruffly wondering aloud at whatever newfangled idiocy they’ve wrought upon the world.

And if he did, it would be quite fitting considering that’s his nickname: 1st Sgt. Kenneth “By God” Johnson.

The photo, as well as a video of Johnson, began making the rounds on Twitter after Stars and Stripes’ Chad Garland first shared them on Wednesday.

“We are going into a defensive posture and setting up for a final showdown with Geronimo,” Johnson says in the video as it cuts between shots of the salty first sergeant and his soldiers digging into defensive positions and shots of the enemy force advancing on their lines at night.

“It is excellent training because in Arkansas very few times do we get to go and train force-on-force like we’re doing here,” says Johnson, who is based out of Harrison, Arkansas. “It will test your knowledge and ability to think fast on the battlefield and to react to counterattacks and to being attacked at all angles.”

The July 27 photo was originally published to the military’s video and imagery database as part of a slideshow entitled 39th Infantry Brigade prepares for Fight Night at JRTC — the lead photo for the gallery was none other than Johnson’s glowering portrait.

Though a better caption might have been: By God… here we go again.