On Dec. 19, the U.S. Navy's Blue Angels flew a missing man formation in honor of the three sailors killed during a mass shooting at Naval Air Station Pensacola in Florida earlier this month. 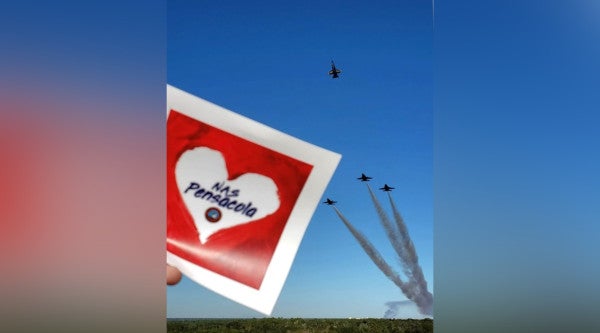 On Dec. 19, the U.S. Navy's Blue Angels flew a missing man formation over Naval Air Station Pensacola in Florida in honor of the three sailors killed in a mass shooting earlier this month.

That same day, the three slain sailors — Naval Aircrewman 3rd Class Mohammed Haitham, Naval Aircrewman 3rd Class Cameron Walters and Ensign Joshua Watson — were posthumously awarded Navy and Marine Corps Medals for heroism, according to a Navy news story. The awards were presented to their families during a ceremony at the National Naval Aviation Museum on base, followed by the missing man flyover from the Blue Angels.

“We can never know what will be demanded of us on any given day, and no one could have foreseen what would be demanded on December 6th, but these men answered the call,” Adm. Chris Grady, commander of U.S. Fleet Forces Command said. “Through their heroic acts, they saved lives by sacrificing their own and for that, we are forever grateful.”

On Dec. 6 Saudi 2nd Lt. Mohammed Alshamrani, a foreign student taking part in an aviation training program at the base, opened fire on military personnel, before being killed in a shootout with law enforcement.

Dozens were wounded in the attack, which the FBI is investigating as “act of terrorism,” Task & Purpose previously reported.