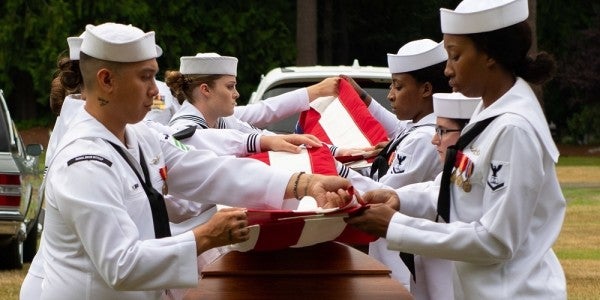 The three sailors whose lives were cut short by a gunman at Naval Air Station Pensacola, Florida, on Friday “showed exceptional heroism and bravery in the face of evil,” said base commander Navy Capt. Tim Kinsella.

“When confronted, they didn't run from danger; they ran towards it and saved lives,” Kinsella said in a statement. “If not for their actions, and the actions of the Naval Security Force that were the first responders on the scene, this incident could have been far worse.”

The suspected gunman has been identified as Mohammed Alshamrani, who was serving as a second lieutenant in the Royal Saudi Air Force and was attending naval flight training at Pensacola. Alshamrani, who was killed by a sheriff's deputy, allegedly held a party one week prior to the incident during which he showed videos of mass shootings, the Associated Press has reported.

Defense Secretary Mark Esper has said it is too early to determine whether the shooting was an act of terrorism.

“I think we need to let the investigators – the FBI – do its work and get us the facts and we'll move out from there,” Esper said on Saturday at the Reagan National Defense Forum in California.

But Sen. Rick Scott (R-Fla.) insists that the shooting was a terrorist attack and he is calling for the military to review all programs that involve training foreign nationals in the United States.

“There is no reason we should be providing state-of-the-art military training to people who wish us harm,” Scott said in a Friday statement. “And most importantly, there is no reason to risk the safety and security of our American men and women in uniform.”

For now, those training programs will continue, service chiefs said at the Reagan National Defense Forum. Their remarks were first reported by Oriana Pawlyk of Military.com.

“All of us have forces in other countries and are in ours,” Marine Corps Commandant Gen. David Berger reportedly said. “[Do I] have reservations about sending Marines or service members to other countries Saudi Arabia? No, not at all.”