"The selfless acts of heroism displayed by these young Sailors the morning of Dec. 6 are nothing short of incredible." 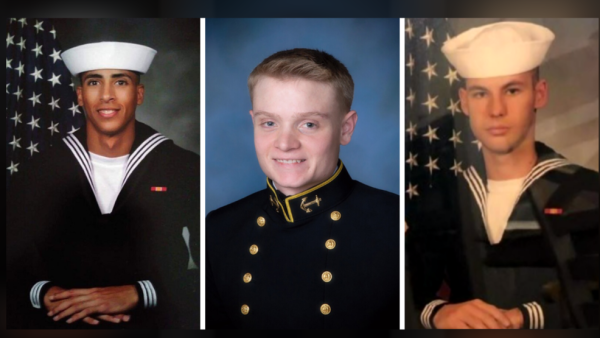 “The selfless acts of heroism displayed by these young Sailors the morning of Dec. 6 are nothing short of incredible,” Chief of Naval Air Training Rear Adm. Daniel Dwyer said in a statement.

“They each embody the warrior ethos we expect and require of all wingmen. There is no doubt in my mind they each would have led the charge in their respective Naval Aviation careers.”

On Tuesday, Acting Navy Secretary Thomas Modly proclaimed Ensign Joshua Watson as a naval aviator, and Airman Mohammed Haitham and Airman Apprentice Cameron Walters as naval aircrewman, according to a public affairs release. The three sailors died in the Friday attack at Pensacola, where naval aviators and crewman are trained.

Dozens of others were wounded in the attack, which is being investigated by the FBI as an “act of terrorism.” The suspected gunman, Saudi 2nd Lt. Mohammed Alshamrani, a foreign student in the training program, was killed by a sheriff's deputy.

Ensign Joshua Watson, a 23-year-old Naval Academy graduate, told first responders where the shooter was even after being shot multiple times, according to his brother. “He died a hero and we are beyond proud,” brother Adam Watson wrote on Facebook.

Airman Mohammed Haitham, 19, who went by “Mo,” was a high school track star who loved making people laugh. A commander at Pensacola told family members he died a hero, having tried to stop the shooter, according to NPR.

Airman Apprentice Cameron Walters, 21, had always dreamed of joining the Navy, according to his father. He told his father Shane, a Navy veteran himself, that he had followed in his footsteps, according to WTOC-11. “Look at me dad, I'm just like you,” Walters said after graduating boot camp.

“Ensign Watson, Airman Haitham and Airman Apprentice Walters are heroes,” Vice Adm. DeWolfe H. Miller III, commander of Naval Air Forces, said in a statement. “Their actions and sacrifice embodied the competence, courage and character of those who wear Naval Aviation Wings of Gold. These wings were presented in honor of their brave actions and in everlasting memory of their sacrifice.”