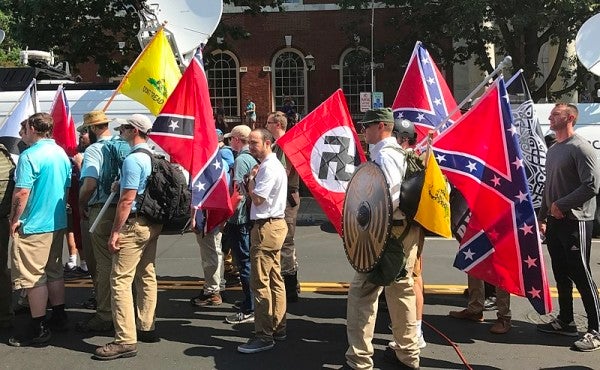 A sailor who was investigated for allegedly serving as a recruiter for a neo-Nazi group has been administratively separated from the Navy, said Cmdr. Ron Flanders, a spokesman for Naval Air Forces.

Tarkington allegedly posted frequently on the now-defunct Iron March online forum, which was a hotbed of neo-Nazi activity until it was deactivated in November 2017, according to Gizmodo.

One of the Atomwaffen Division members whom Tarkington allegedly recruited was John Cameron Denton, who was arrested in February for allegedly targeting journalists, Gizmodo reported.

The Navy launched an investigation into Tarkington after the Gizmodo story ran on March 12, Flanders said. No information about the investigation was immediately available.

Flanders said he was unable to say whether Tarkington was separated specifically because of the investigation, which is now complete.

“His separation was administrative in nature, and I am not able to go into details,” Flanders said.

Tarkington joined the Navy in July 2019 and arrived at Naval Air Station Lemoore that December, according to his official biography, which does not include any military awards or decorations. He became an aviation machinist’s mate airman apprentice (E-2) and left the Navy at that rank.

Gizmodo was first to report on Friday that the Navy had removed Tarkington.