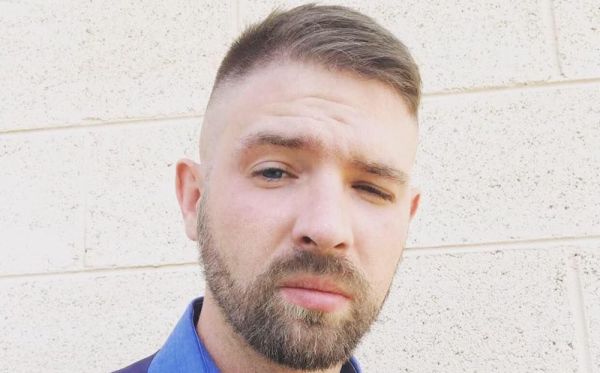 The viral story of a Navy veteran who claimed he was stabbed for having a “fashy” side-fade haircut resembling the one popular among white supremacists was totally fabricated, according to The Guardian.

Police arrested Joshua Witt after the 26-year-old ex-sailor admitted that he was, in fact, not stabbed by a “confused anti-fascist” in the parking lot of a Steak ’n Shake in Sheridan, Colorado, in the wake of the violent Charlottesville protests.

Witt first reported the fake incident on his Facebook page in a post that went viral. “Lolz apparently I look like a neo nazi so I get stabbed at,” read a caption superimposed over bloody photographs of Witt’s stab wound. Internet fame quickly ensued.

In his original version of the story, Witt described a harrowing altercation with a black man in his mid-20s armed with a small knife. Witt told the New York Post that he was opening his car door when he was blindsided by the assailant.

“All I hear is, ‘Are you one of them neo-Nazis?’ as this dude is swinging a knife up over my car door at me,” Witt said. “I threw up my hands up and once the knife kind of hit, I dived back into my car and shut the door and watched him run off west, behind my car.”

The story was picked up by a number of other news outlets, which recycled Witt’s account of the alleged attack under headlines like “Anti-Fascist Stabs Innocent Man Over ‘Neo-Nazi’ Haircut” (Fox News) and “Man stabbed by anti-fascist because of his haircut” (The Independent).

Fox News has since deleted the story from its website — the link now sends readers to a “404” page — but you can read it here. Witt’s Facebook post has also been taken down.

While Witt was busy feeding his bullshit story to gullible reporters, the Sheridan police department got to work tracking down his attacker. And it didn’t take long for them to find the culprit: Witt himself.

Because here’s the thing about Witt: He’s kind of an idiot. This character flaw became glaringly evident as the investigation got underway.

As the Sheridan police chief, Mark Campbell, told The Guardian, officers were immediately suspicious because nobody else had called 9-11 to report the attack. “That was the first red flag,” Campbell said.

Other red flags included Witt’s inability to identify his fake attacker in a line-up… and the fact that when police met with Witt, his hair was much longer than it was in the photo he shared on Facebook (re: “Lolz apparently I look like a neo nazi”).

And then there was the surveillance footage of Witt, in a black t-shirt reading “COUGAR BAIT,” buying a knife at a sporting goods store near the Steak ’n Shake:

Joshua Witt seen in surveillance footage purchasing the knife he'd use to accidentally stab himself with.

The real story: Witt just really wanted to play with his new toy, and, well, he didn’t do a great job of it. He spilled the beans in a follow-up interview with police last week.

“He was opening up the knife package in the car and he cut himself,” Campbell told The Guardian. “I don’t believe he showed any remorse. Our take is he kind of made this up and it kind of got out of control when it went on Facebook.”

Witt, who is originally from San Diego, California, served on active duty and was a boatswain’s mate, according to Navy records. He currently works as a heating and air conditioning technician, according to Campbell.

If convicted of false reporting, Witt could face a fine of $2,650 and up to a year in jail.