2 years after the Niger ambush, the US reportedly plans on ramping up counterterrorism efforts in the region

The United States plans on ramping up counterterrorism efforts in the Sahel region of Africa in response to an alarming rise in violent extremism there, Foreign Policy reports 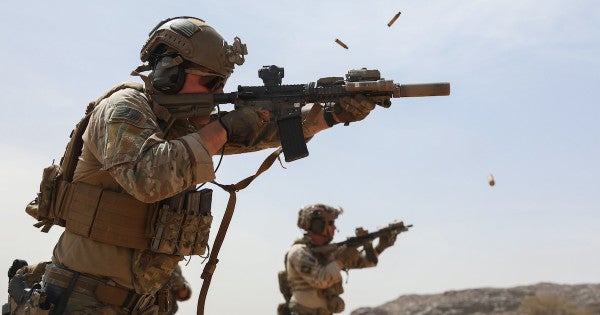 The United States plans on ramping up counterterrorism efforts in the Sahel region of Africa in response to an alarming rise in violent extremism there, Foreign Policy reports.

The Sahel includes Niger, where four U.S. Army Special Forces personnel were killed in a deadly October 2017 ambush carried out by Islamic extremists.

The Trump administration “is preparing to create a new special envoy position and task force” to handle growing security threats in the region, Foreign Policy reports, a move that reflects “a growing alarm in Washington about the rise of extremist groups in West Africa.”

The U.S. has gradually ramped up counterterrorism efforts in the region since the 2017 Niger ambush. Weeks after the attack, U.S. Army Africa announced plans to increase security, intelligence, and training operations Niger, Mali, Chad, Cameroon, and other neighboring countries.

More recently, U.S. Africa Command announced the completion of a critical drone base in the Nigerien city of Agadez from which armed drones will conduct that intelligence, surveillance, and reconnaissance operations for the foreseeable future.

But according to a December brief from the Africa Center for Strategic Studies, attacks involving violent extremist groups have only doubled in the region since 2015, so far that nearly 700 such incidents have lead to nearly 2,000 fatalities this year alone.

Those violent extremists include ISIS in the Greater Sahara (ISIS-GS), the terror group thought to be responsible for the 2017 Niger ambush and perpetrator of several coordinated ambushes across Burkina Faso and Mali.

According to Foreign Policy, UN officials have in recent months come to worry that this current rise in violence in the Sahel will only worsen as other ISIS extremists return home from the battlefields of the Iraq and Syria following the group's territorial defeat there.

“We say we have wiped out the Islamic State in Iraq, in Syria. Do people ask the question where these people are going?” as Mahamat Saleh Annadif, special envoy for the UN peacekeeping initiative in Mali, told Al Jazeera in July. “There is a breeze going towards the Sahel.”

Despite the recent influx of resources into the region, a renewed focus on the Sahel appears top of mind to U.S. officials.

“I think is the most difficult and challenging situation we have now in the continent,” Assistant Secretary of State Tibor Nagy, the United States's top diplomat on Africa, told Foreign Policy in November. “The threat of terrorism and violent extremism is expanding.”

Air Force Maj. Gen. Marcus Hicks, the head of U.S. Special Operations Command Africa, put it more bluntly at the sidelines of the U.S. exercise Flintlock back in February: “I would tell you at this time, we are not winning.”