The Dark Side Of America’s ‘Train, Advise, And Assist’ Missions

Cameroon, the central African country once known as an oasis of stability amongst volatile neighbors, is falling apart. Recent disturbing... 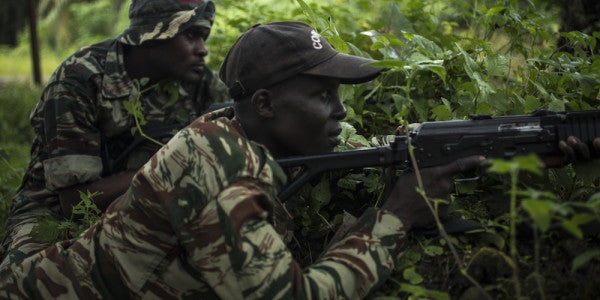 Cameroon, the central African country once known as an oasis of stability amongst volatile neighbors, is falling apart. Recent disturbing images emerging depict a country descending into violent civil war as the Cameroonian government fights to quash an Anglophone separatist movement. Thousands of innocent civilians have fled to neighboring Nigeria and Chad to avoid the violent atrocities orchestrated by both sides.

The most notable among some of these recent images, however, is the participation of members of Cameroon’s elite Rapid Intervention Battalion (BIR), a unit previously investigated for humanitarian abuses that have also been trained and equipped by the American military.

This training has been part of broader deployments of U.S. military personnel in support of regional security operations against Boko Haram and ISIS, deployments which have made Cameroon host to the fourth largest contingent of American forces on the continent, as well as critical drone base. BIR has proven to be effective in fighting Boko Haram, but their involvement in repeated humanitarian abuses warrants a debate about the United States’ long-term strategy and if such abuses are something we simply accept when engaged in such unstable regions.

This points to a larger problem: just as lawmakers were frustratingly unaware of U.S.-led operations in Niger when four soldiers were killed in an ambush there in October 2017, it is doubtful that policymakers have given informed consideration as to why the U.S. military is in Cameroon — or, even more worrying, the potentially bloody long-term effects of those training missions there. The lack of conversation over why U.S. military personnel are currently in harm’s way in Africa speaks to civil disengagement with what the military is doing and where it is operating — and it is urgent that we question our current role there.

The origins of the separatist conflict in Cameroon date to a 1960s referendum, when the southern Anglophone portions of British Cameroon elected to join the newly-independent, French-speaking state of Cameroon as part of a federal system. Since joining that federal system, the Anglophones, who comprise less than a fifth of the population, have felt increasingly marginalized by what they perceive as a neglectful government that has dissolved the federal system while paying little attention to the state of their infrastructure, health, and education in addition to excluding them from power and the best government jobs.

These tensions came to a head in October 2016, when protests about the use of French in education and law resulted in a heavy-handed government response that only inflamed Anglophone separatist sentiment. Demonstrators were imprisoned and internet services to the Anglophone regions were cut. A year later, more demonstrators took to the street to demand independence and were met with military force. Just a month following the protests, the first guerrilla attacks in support of an independent state called “Ambazonia” launched.

The crisis has only escalated since then with Amnesty International reporting that separatists had “stabbed to death and shot military personnel, burned down schools and attacked teachers, while security forces have tortured people, fired on crowds and destroyed villages, in a spiral of violence that keeps getting more deadly.”

Cameroon’s conflict is concerning given the country’s regional role, notwithstanding support from the U.S. military and its participation in the fight against Boko Haram and ISIS. As Central Africa’sbiggest economy withstrategically vital ports, Cameroon is a regional nexus whose failure could bring down neighboring states. A divided Cameroon could jeopardize international military efforts to stabilize the region and defeat Boko Haram and ISIS and make an area already filled with both extremist groups and cheap weaponry an even more viable terrorist sanctuary.

For these reasons, successive administrations have devoted not inconsiderable resources to defeating Islamic militancy in West Africa and maintaining regional stability. In the case of Cameroon, the BIR has receivedextensivetraining from U.S. Army Special Forces while the Cameroonian military at large hasreceived training in surveillance techniques, drone-usage, as well ascounter-IED and counter-insurgent strategies from both the U.S. Marines Corps and Army. This is in addition to theprovision of military aircraft and armored vehicles, all ostensibly for defeating Boko Haram.

However, the recent usage of the BIR by the Cameroonian government in its violent suppression of the Anglophone insurgency raises questions about the viability of “advise and assist” as a strategy. Despite the recent efforts of the military to improve its advise and assist capability in the past several years through initiatives like the Security Force Assistance Brigades, American efforts to develop local forces as proxies through which to combat terrorism have been spotty at best.

Perhapsmost famous is the example of Iraqi units that, after years and years of comprehensive training from American forces, fled in the face of a much smaller force of ISIS fighters leaving their American-provided equipment to be taken by the militants. Previously, in Mali, American armed and trained units did worse than flee but defected to the Islamic militants they were trained to fight; not only taking their skills but weapons and equipment with them. Things aren’t looking betterin Afghanistan where hundreds of thousands of Afghan soldiers, supposedly being trained and equipped by the DoD, exist only paper, a fiction perpetuated by corrupt Afghan officers who proceed to sell American equipment to the Taliban. Unfortunately, fraud, defection, and unwillingness to fight are only some of the problems confronting advise and assist as a strategy.

While Cameroonian forces may not have outright defected to the enemy with their training and equipment, their participation in atrocities underlines the fundamental problem that host nations can direct American assistance towards targets other than those we intended. While the Pentagon has stated that military assistance is subject to monitoring to ensure that this is not the case, they have similarly acknowledged that sovereign nations are free to transfer units or personnel as they see fit.

The United States needs to examine whether the limited counterterrorism gains against Boko Haram are worth the undermining of good governance and rule of law. While U.S. Africa Command’s (AFRICOM) force posture statement recognizes that, “disenfranchisement from corrupt governments and abusive security forces” is what makes local populations “prime targets for exploitation by criminal and terrorist organizations across the continent,” establishing good governance is not supposed to be the job of the Department of Defense. Yet policymakers have increasingly come to rely on the Pentagon as a one-stop shop for all foreign policy problems. AFRICOM’s ideal stated strategy, in keeping with its interagency approach and strong State Department presence, is to utilize a whole-of-government approach to establish regional stability, but with foreign aid and diplomacy facing drastic cuts, the Pentagon is left solving non-military programs on its own.

Thus, we are left with train, advise, and assist, which likely does more to undermine good governance than enhance it. Studies have shown that American military presence in Africa has contributed to the backlash against local governments and the United States, and that sustained American military engagement in these advisory missions makes military coups more likely. Most importantly for the current mission in Cameroon, these advise and assist endeavors can strengthen a regime prone towards human rights abuses and make them more reliant on military force when dealing with domestic grievances. By strengthening a military that is then used to abuse a local population, advise and assist can lay the groundwork for more violence that further destabilizes the very country they were intending to make more peaceful.

Advise and assist also obfuscates the fact that many of these missions put soldiers in real danger, as evidenced by the deaths in Niger. If the Pentagon sees fit to include Cameroon as a location where deployed personnel receive danger pay, then those men and women deserve an actual discussion of why they are being sent into danger and if what they are being asked to do actually brings America any closer to its objectives. Otherwise, policymakers and the public will likely be surprised again when the breaking news is American casualties in a country no one was aware we were engaged in.

James Fahy is a member of the U.S. Army Reserve with a Master’s in War Studies from King’s College London.