President Barack Obama’s decision to deploy 3,000 troops to Liberia in response to the West African Ebola epidemic may have... 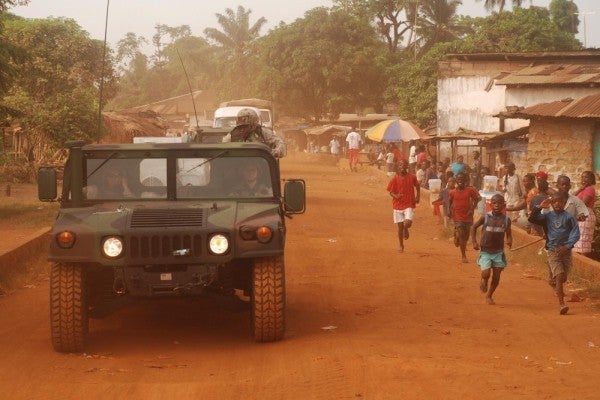 President Barack Obama’s decision to deploy 3,000 troops to Liberia in response to the West African Ebola epidemic may have raised a few eyebrows last week, but the move was largely supported by a majority of U.S. government leaders despite predictable gurning from the usual suspects. And though this type of deployment may seem outside the norm for many veterans who became accustomed to multiple, revolving combat deployments in recent years, the fact is, this is a mission set the U.S. military has been called upon to tackle again and again throughout its history, and precisely the type of thing we should expect to see more of in the coming century.

Military intervention in response to conflict and disaster is by no means new. Alexander the Great believed that assisting conquered populations was as much a humane gesture to the vanquished as it was a path to earning their loyalty, and Napoleon viewed military support of civil authority as a means of shaping post-conflict social order. This is also true of U.S. military history dating back to the Mexican-American War, where Army Gen. Winfield Scott’s policies emphasized conciliation toward the Mexican people and required U.S. forces to provide food, sanitation, and local governance. Though some may argue that military efforts to counter infectious disease are less common, examples do exist. U.S. troops have in fact been employed in response to outbreaks of smallpox, influenza, and cholera, most often working as an enabling force for some number of other civil agencies — just as U.S. Africa Command forces will in Liberia.

It is true that such humanitarian activities are seldom thought of as traditionally military in nature, particularly inside the U.S. armed forces where the warrior culture places an emphasis on warfighting; that is, winning our nation’s wars and maintaining freedom of the seas. This is entirely understandable when you consider that in the 238 years since the United States first declared its independence, we have engaged in sustained, conventional, force-on-force conflict twelve times. (Four “total” wars: the War of Independence, the Civil War, World War I, and World War II; and eight “limited” wars: the War of 1812, the Mexican War, the Spanish-American War, the Korean War, the Vietnam War, the Gulf War, the Iraq War, the War in Afghanistan.) This may not at first appear to be a large number, but add their combined length and you see that we have been at war for more than 55 years — nearly one-quarter of our nation’s history.

Perhaps, then, it is because of the scale of these wars and the significant role each played shaping today’s America that we tend to overlook whatever it is our armed forces might be doing in the service of global stability the rest of the time. But it is important to recognize what this current mission in Liberia represents in a broader context, and why we must accept the troops’ potential exposure to deadly diseases as being as much a definition of “in harm’s way” as rocket attacks and IEDs.

Legitimate opposition to this notion has been insubstantial, and though a few were willing to dismiss the need in order to make political hay, responsible leaders are demonstrating that they understand the importance of civil stability in West Africa. This is a region that has birthed a number of militant Islamist movements and organizations, such as al-Qaeda in the Islamic Maghreb in North Africa, Boko Haram in Nigeria, al-Mourabitoun in Mali and surrounding regions, and Ansar Dine in Mali — all of which actively seek to hinder the regional efforts of the United Nations, the Africa Union, and the Economic Community Of West African States for their own purposes.

Perhaps even more encouraging than the not-inconsequential fact that national leadership appears unified on the issue, is that even the U.S. military’s view of humanitarian assistance and disaster response as merely a “lesser-included” category of full-spectrum operations has shifted somewhat, largely as a result of lessons learned over the last decade. The U.S. armed forces are publicly embracing this role more strongly than they have at any time in our history, even going so far as to use humanitarian response efforts to promote each service’s unique capabilities. The Navy was the first to exploit the issue in recruiting efforts, and has now firmly anchored its “Global Force for Good” campaign in these kinds of missions. And though none of the other services has attempted this level of rebranding, the Air Force and Marine Corps have made complementary moves by featuring airmen responding to the 2010 Haiti earthquake and Marines storming a beach populated by unseen screaming people whom we can only assume are in some kind of despair.

This cultural shift is a good thing because today’s operating environment requires a well-led force that can balance offensive action with stability missions like security assistance, humanitarian and civic assistance, and noncombatant evacuation. That’s not to say there aren’t still plenty of bad guys out there who must be dealt with in the traditional way. But for service members and veterans, it is important that we understand and articulate the importance of humanitarian missions in terms of national security and encourage our fellow Americans to support these deployments just as they would the next big war.