5 Ways Climate Change Will Impact The US Military

Amid the celebratory mood of the Coast Guard Academy’s commencement ceremony May 20, President Obama told cadets in his keynote... 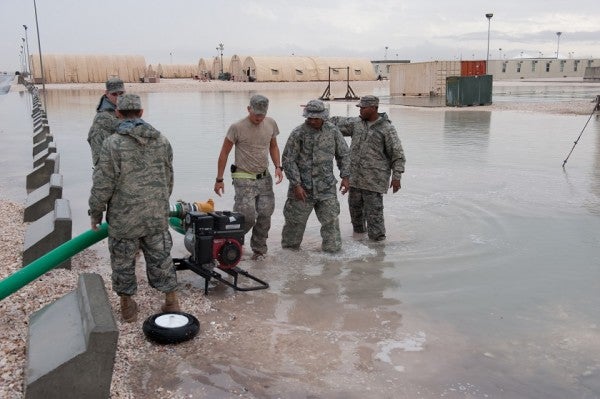 Amid the celebratory mood of the Coast Guard Academy’s commencement ceremony May 20, President Obama told cadets in his keynote speech that they hold a special distinction in America’s maritime history — one that means new dangers and responsibilities.

“You are part of the first generation of officers to begin your service in a world where the effects of climate change are so clearly upon us,” Obama said. On a deceptively beautiful day on the New London, Connecticut, campus, the president went on to highlight several ways global climate change will impact America’s military in the coming years.

“I’m here to say that climate change constitutes a serious threat to global security, an immediate risk to national security,” Obama told the graduates. “And make no mistake, it will impact how our military defends our country, so we need to act and we need to act now.”

From melting Arctic ice to more severe storms and longer wildfires, here are several effects these changes will have on national and global security.

1. More humanitarian missions around the world.

Obama cautioned that climate change is resulting in more severe storms globally, which will increase the frequency that America’s military will need to respond to disaster areas with significant humanitarian relief. The president referred to the ferocious November 2013 Typhoon Haiyan that devastated the Philippines, killing 6,000 people and impacting 14 million, according to UNICEF.

“No single weather event can be blamed solely on climate change, but Typhoon Haiyan in the Philippines gave us a possible glimpse of things to come,” Obama said. “One of the worst cyclones ever recorded, thousands killed, many more displaced, billions of dollars in damage, and a massive international relief effort that included the United States military and its Coast Guard.”

The reason Superstorm Sandy left so much of lower Manhattan under water in 2012 is because the sea level in New York Harbor is a foot higher than it was a century ago, the president explained. “During Sandy, the Coast Guard mounted a heroic response along with our National Guard and Reserve, but rising seas and strong storms will mean more disaster response missions,” Obama said.

3. A threat to the readiness of military forces.

“Climate change poses a threat to the readiness of our forces,” the president said. “Many of our military installations are on the coast, including of course our Coast Guard stations. Around Norfolk high tides and storms increasingly flood parts of our Navy base and an air base. In Alaska, thawing permafrost is damaging military facilities. Out west deeper droughts and longer wildfires can threaten training areas our troops depend on.”

Given these effects, Obama continued, politicians who insist they care about military readiness should also be paying closer attention to the problem of climate change. Just as it is the military’s duty to protect civilian populations, the military should strengthen the infrastructure of its own bases and natural barriers to withstand the elements.

Rapidly melting sea ice is changing the landscape of the Arctic and its coastline, and creating access to new areas of resources, Obama warned. “We’re witnessing the birth of a new ocean, new sea lanes, more shipping, more exploration, more competition for the vast natural resources below it,” he said.