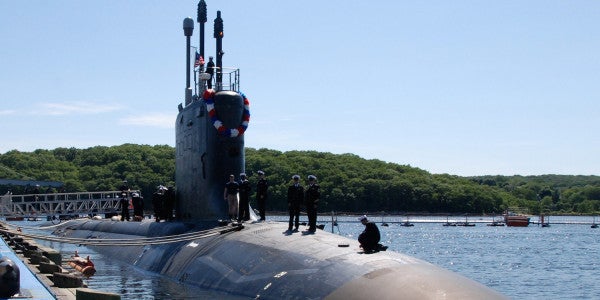 CNN Chief National Security Correspondent Jim Sciutto this week spent time with the submariners aboard the USS Missouri during a training mission off the coast of Florida. The crew recently returned from a six-month deployment to the U.S. European Command area of operations.

In the video, Capt. Ollie Lewis, commander of Submarine Squadron 12, which operates 10 Atlantic-based submarines including the Missouri, hints at the rising number and sophistication of submarines operated by Russia, China and other countries.

“We're operating in places where we didn't have to rely on an adversary being there to challenge us,” he said. “That's changing. We're at the point now where we have to consider that there's an adversary there ready to challenge us in the undersea domain and that undersea superiority is not guaranteed.”

The USS Missouri (SSN 780) deployed the European theater following Russia's annexation of Crimea in 2014 and tracked a Russian sub that emerged off the coast of Florida in 2012, the segment reports.

Given the global proliferation of such boats, Cmdr. Fraser Hudson, the Missouri's commanding officer, said in the video, “The best way right now to find another submarine is with a submarine. Without stealth, a submarine could not do the mission it does.”

The Missouri is one of more than two dozen Virginia-class attack submarines in the U.S. Navy fleet. Powered by a nuclear reactor, the nearly 400-foot-long boats are capable of quietly cruising at more than 25 knots submerged.

The submarine, which was built by General Dynamics Corp. and is homeported in Groton, Connecticut, is designed to carry 12 so-called vertical launching system, or VLS, tubes for Tomahawk cruise missiles and four 21-inch tubes for Mk48 Advanced Capability torpedoes, according to information released by the Navy.

In the video, the crew simulates firing cruise missiles at land targets. The attack subs are designed to carry out multiple missions, from projecting power ashore to destroying enemy subs and surface ships, gathering intelligence and deploying special operations forces.

The video gives a glimpse of what it's like for the 135-person crew, the vast majority enlisted personnel, to live aboard the boat.

While he doesn't discuss the recent push to integrate women aboard submarines — or the 2014 scandal in which the Navy's first female submariners were secretly videotaped while undressing and showering on board the USS Wyoming — Sciutto, who stands 6-foot-3-inches tall, shows just how tight the living spaces are in part by ducking his head as he walks through the boat and squeezing into a sleeping rack.

In a follow-up interview with Military.com, Sciutto noted that multiple crew members rotate through the same bed — the 24-hour workday is broken down into three eight-hour shifts, so whoever is on the night shift gets the rack. They also share a lone treadmill and sometimes turn extra space in the torpedo bay into a makeshift exercise room, he said.

When asked what he'll remember most from the assignment, Sciutto said, “How they do a high-stress job in a confined environment with very little space and they keep good morale … It takes sacrifices, rules, good commanders. It's pretty remarkable to make that work.”