Only nine of the USS Tang's original 87 crew survived the night it sank. 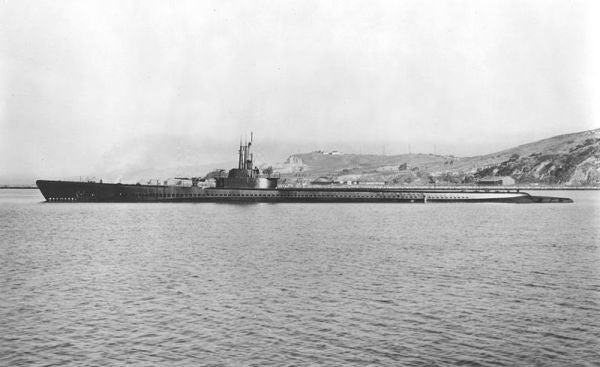 Sept. 2 marks the 75th anniversary of the formal Japanese surrender ceremony that officially brought World War II to an end.

Navy veteran William “Bill” Leibold remembers that time well. He had just been released from a secret Japanese military compound, known as the “torture farm,” after 10 months in captivity. His weight, he recalls, had dropped from 172 to less than 60 pounds.

“I try not to think of those days,” says the Escondido resident, 97. “We weren't fed regularly.”

Leibold was one of nine survivors of a crew of 87 on the Navy submarine, USS Tang. The sailors were plucked out of frigid ocean water by a Japanese patrol boat after the sub had aggressively attacked its convoy in the Formosa Strait en route to the Philippines.

After sinking to its watery grave on Oct. 25, 1944, the Tang was later credited with taking out 33 enemy ships, carrying out daring attacks and rescuing numerous downed airmen. It earned the WWII reputation as the most lethal Allied sub in the Pacific.

In a tragic quirk of fate, as the Tang fired its 24th and final torpedo before heading home that October night, the torpedo malfunctioned. Leibold was stationed on the bridge.

“When we fired, the torpedo surfaced instead of running as it should have. It flew out of the water and then went back down,” he recalls. The erratic torpedo continued to splash up and down like a porpoise in a semi-circle on the port side, as the sub built up speed to move out of harm's way.

“All of us on the bridge were concerned, but I don't think any of us fully realized it was heading back to hit us in the stern,” says Leibold, who served as chief boatswain's mate. “No one to this day knows what caused it to run erratic. Something just went wrong with the torpedo itself. Possibly it was damaged during loading into the tube. Any number of things could have happened. No one will ever know.”

The rest is naval history. And the details are clearly imbedded in Leibold's memory:

“When it hit our stern, we went down fast. The aft torpedo room flooded. Half the compartments flooded rapidly…. I went down with the ship. I don't know how far. I was able to swim back to the surface. I could see the bow of the Tang still out of the water, but I couldn't swim against the current to get to it. None of the men on the bridge were able to swim back to the bow.”

The disaster unfolded in the 2:30 a.m. darkness. Leibold guesses that maybe he was submerged about 50 feet before he felt a thud and started swimming upward.

Trying to stay afloat, Leibold kicked off his shoes and took off his trousers. He tied the pant legs together, tried to inflate them and slip them over his head to use as a lifesaver-like flotation device as the crew had been instructed, but they didn't hold air.

Eventually he heard a nearby voice call out. It was Floyd Caverly, a radio technician who, by luck, had been dispatched to the bridge to resolve a communication problem moments before the sinking.

“He told me he couldn't swim,” says Leibold. “I told him he could float.” Leibold continued to coax him on when to inhale and exhale in the choppy water to keep from drowning. Leibold later received the Navy and Marine Corps Medal for heroic conduct for supporting a shipmate in the water for eight hours.

It was discovered later that half of the 87 members were killed upon impact. Others were trapped in what had become a metal tomb on the ocean floor 180 feet deep. The incident made naval history because this was the only sub to have survivors ascend during an emergency without surface assistance by using the Momsen lung, a crude breathing device stored on the sub for use in such emergencies.

Some who reached the surface could not swim and drowned, Liebold says. In the end, only nine of the original 87 crew, including Leibold and three others from the bridge, survived the night and were picked up by the Japanese.

They were placed in solitary confinement in a navy compound in Ofuna, Japan but not classified as prisoners of war, Leibold says.

Nearly every day they were taken out to “swab the halls,” he recalls, explaining it was really a ruse to give the guards “an opportunity to exercise what we called their baseball bats. We were beaten almost every time we were taken out of the cells.”

When asked what kept him going, Leibold said: “I don't know. It was just the determination to survive. Staying alive was the one thing we had to do.”

Just before their liberation on Aug. 22, 1945, they were moved to a separate section of a POW camp run by the Japanese army.

Leibold has recorded an oral history of his ordeal and was extensively interviewed by Alex Kershaw, an author who specializes in military history. Kershaw wrote the dramatic story of the Tang legend and tragedy in his 2008 book, “Escape from the Deep: The Epic Story of a Legendary Submarine and Her Courageous Crew.”

“Bill is (the) last survivor of (the) greatest U.S. submarine in history,” Kershaw tells me. “He helped found Navy SEALs. He's a living legend in U.S. Navy. Brave, honorable, selfless, the best example of the greatest generation.”

Related: How a meat truck driver and prison guard helped solve one of WWII's most enduring naval mysteries

Kershaw credits Leibold with helping win the war through his role in the “silent service” — the submarine force that strangled the Japanese Empire through its sinkings and blockade. “He's also a star of my book,” Kershaw notes.

After being liberated, Leibold returned to the United States to find that his wife, his high school sweetheart, Grace, was still waiting for him. A less lucky fate greeted four of the seven married ex-prisoners. Having received a telegram notifying them of the ship's loss, their brides, understandably, had moved on with their lives and remarried.

Despite his ordeal, Leibold completed a 40-year career in the Navy, returning several times to Japanese waters as commander of a submarine service/rescue ship.

Having previously been homeported in San Diego, he and Grace stayed and raised their three children in Chula Vista. The couple later built a home on Palomar Mountain, aptly nicknamed the “Ship House” for its shape and windows.

Several years later, they bought a house in Escondido. After Grace passed away, he moved into an independent living facility.

Leibold stayed in touch with his former Tang crewmates and even held a reunion in the Ship House. Floyd Caverly died in 2011, just shy of his 94th birthday and is buried here at Fort Rosecrans National Cemetery.

Leibold is the last survivor.