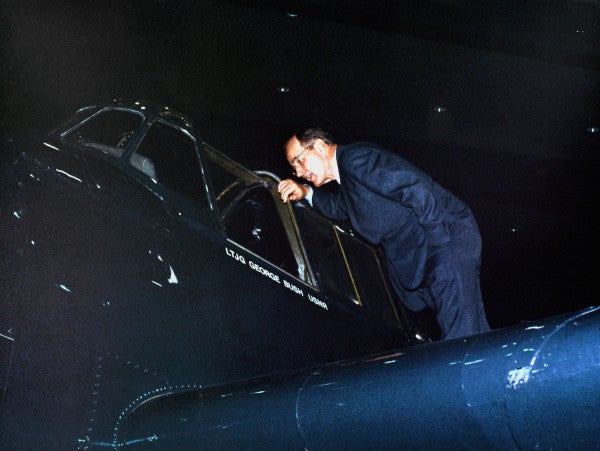 On Sept. 2, 1944, 20-year-old Navy pilot, Lt. j.g. George Herbert Walker Bush, was flying his 50th mission of World War II, bombing a radio tower on the small Pacific island of Chichi Jima. Bush was among nine American service members to survive being shot down over the small island over the course of the war, but he is the only one who made it home. The other men were captured and faced unimaginable conditions and treatment. It is an incredible history of service and sacrifice and the harsh realities of war. Through Bush, it is an example of the limitless ladder of the American dream.

The day before, Bush, Nadeau, and Delaney had flown to Chichi Jima for a bombing run to destroy an enemy gun emplacement. “The fire on that island was the worst we had seen,” Nadeau later told the Navy.

Pre-flight the next day, Nadeau was approached about being replaced on the mission. “The Chief came over and said, ‘You have to stand down. Lieutenant White is going along in your place,” Nadeau told CNN in a 2003 interview. “And I said, how come? ‘Bush said it was all right, the commander said it was all right. So he's going.’ So I said, OK. I sat down in my chair and they took off and nobody came back.”

When the planes reached Chichi Jima, the anti-aircraft fire was intense, and Bush’s plane was hit as he approached his target. Nevertheless, Bush dropped his bombs on target and turned back to sea. He told his crew to bail out and gave them every possible chance to survive. Only at the last possible moment did he jump out himself as smoke filled the cockpit and the wings caught fire.

Bush waited for hours in a liferaft with American fighters circling overhead for protection. “There was no sign of Del or Ted anywhere around,” Bush told CNN. His two crewmen would not survive the crash.

“I looked as I floated down and afterwards kept my eyes open for the raft, but to no avail. The fact that our planes didn't seem to be searching anymore showed me pretty clearly that they had not gotten out. I'm afraid I was pretty much of a sissy about it because I sat in my raft and sobbed for a while … I was crying, throwing up and swimming like hell.” He was soon picked up by the USS Finback, a submarine on patrol in the area.

Other men shot down over Chichi Jima over the course of the war were were not so lucky. Eight would be captured by the Japanese and disappear entirely. For nearly five decades, most people had no idea what had happened to them until a large declassification of government documents in 1997 brought their stories to light.

“Flyboys: A True Story of Courage,” a 2003 book by author James Bradley, chronicles the events surrounding the deaths of these men, using declassified documents from the 1947 trial against their captors and executioners.

“The U.S. government decided the facts were so horrible that the families were never told,” Bradley writes in his book. “Over the decades, relatives of the airmen wrote letters and even traveled to Washington, D.C., in search of the truth. Well-meaning bureaucrats turned them away with vague cover stories.”

They were captured as prisoners of war who were shot down over the island. But they were far from typical prisoners. The men were ultimately killed by their Japanese captors, but not before being victim to terrible acts of cannibalism at the hands of the Japanese military. Bradley describes it in part as a symptom of the intense warrior culture that existed in the Japanese empire during World War II.

But for the American and Japanese governments after the war, it was a startling scar on the human conscience, and both governments hid the morbid fates of those men.