Escape And Evade Danger Like A Special Forces Veteran

If you run scared, you’re going to die. This is the rule of thumb when it comes to evasion, and... 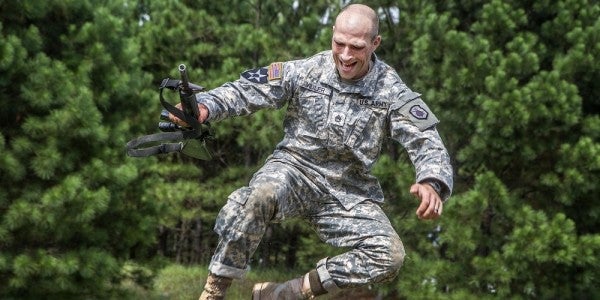 If you run scared, you’re going to die.

This is the rule of thumb when it comes to evasion, and there’s a reason for it. If you’re confronted with a threat you can’t overcome, you should escape it. That makes complete sense, but there’s a difference between running scared and evading.

Successfully evading someone or something comes down to planning, making a deliberate decision, and maintaining your situational awareness, says Mike Glover, an Army Special Forces veteran. Glover is also the chief executive officer and co-founder of FieldCraft LLC, a company that teaches civilians how to survive natural disasters and extreme situations.

Glover walked Task & Purpose through the different types of evasion techniques, their basic principles, and what you can do in everyday life to avoid losing your shit and running wildly into danger during a catastrophe.

“When you think about evading, you’re obviously evading something that’s dangerous,” explains Glover. “The way we look at it, is number one, everything we do, if your point is to avoid a potential danger that you know about, we always pre-plan for those potential dangers.”

Pre-planning is the number one priority and you can use it to evade everything from a stalker, to a bad neighborhood, to a war zone, according to Glover, who adds that “the principles kind of remain the same.”

Pulling off a successful evasion requires you do three things.

Additionally, there are things you can do to avoid having to evade a threat, says Glover.

For example, if you’re you’re trying to dodge a stalker boyfriend or girlfriend, don’t follow the same routes to and from work, school, or the store. Switch it up.

But once you’ve been found out, it’s time to escape. For that, there’s a whole other set of steps to follow, and they vary based on the situation and how much time you have to react.

There are two types of evasion: pre-planned and hasty.

Pre-planned, or deliberate evasion, involves logistical or pre-placed elements that aid in your escape, for example, pre-planting supplies at a series of places along your escape route.

“The number one priority is develop a plan to facilitate your evasion,” says Glover, adding that this means making a safe route with pre-planned destinations.

If you work and live in the city, that might mean making a call to grandma saying “Hey, if something happens, you’re going to be the first person I call, expect me to show up on your doorstep,” says Glover, who notes that yes, grandma’s house can be a safe house.

That might be the halfway point to a friend or family member’s home out in the country, where you’ve placed some food or water in case of emergency. You can even go old school and give a grid coordinate like, “by the white mailbox near the old windmill.”

But, it’s essential that you fully plan your evasion, you can’t half ass it. For example, if you plan on bugging out to someone’s house, you need to let that person know that you’ll be heading there.

On the opposite end of the spectrum, we have a hasty evasion, which is an escape plan that’s developed on the fly in response to an unexpected or unforeseen danger. A hasty evasion may not have a fully laid-out plan, but you still need to think it through, says Glover, adding that in this case it might be a few steps at a time, literally.

This can be as simple as immediately assessing the situation. Maybe you’re stuck on a crowded street during a catastrophe. Find the quickest way to a safe place, whether that’s home, work, or a friend’s place, and see if you can get there on side streets.

Ultimately, pulling off a successful evasion hinges on being decisive.

Whatever you do, don’t panic.

“At least have the wits about you to make a hasty plan of evasion, as opposed to doing what 80% of people do in survival situations, which is freeze, and about half of those people die,” says Glover.

Don’t be that guy. Just think a few steps in advanced and whatever you do, don’t freak out.