Politicians Aren’t Talking About Climate Change, But Veterans Can Fix That

There’s one national security threat that has hardly received any attention in the hours of presidential debates we’ve seen so... 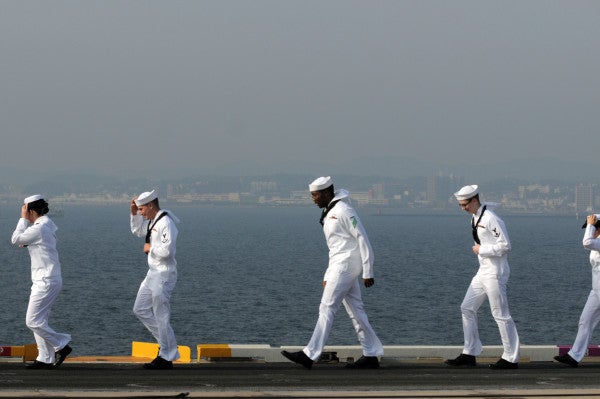 There’s one national security threat that has hardly received any attention in the hours of presidential debates we’ve seen so far this cycle.This threat decreases resilience at home, destabilizes hotspots abroad, and puts men and women in uniform all over at greater risk through any number of factors.

That threat is climate change, and our dependence on oil, which makes the problem bigger every passing day. And as veterans who have seen the far-reaching and immediate effects of climate change both at home and abroad, we are best-equipped to make the case directly to those who need to hear it the most: Presidential candidates.

It isn’t a hard line to draw. The Pentagon calls climate change a “threat multiplier” in the sense that it hits the most unstable places in the world hardest and tends to make things go from bad to worse. If you’re an extremist group courting recruits, the effect of climate change is to make people more desperate through resource shortages, droughts, and weather-induced mass migrations. Governments trying to uphold the rule of law in these places are often already struggling; climate change makes their struggles tougher.

Members of the U.S. military get deployed around the world to solve these problems (not to mention lead the humanitarian response to increasingly nastier and more frequent severe weather events), but climate change hits us here at home too. Rising sea levels means increased costs for base maintenance. Droughts and wildfires inhibit training exercises. And extreme heat taxes our weak civilian power grid, causing outages on base that disrupt the support we provide to our folks in the field.

Our oil dependence, meanwhile, only makes things worse. Anyone who isn’t a dyed-in-the-wool climate change denier acknowledges that carbon dioxide, released by the burning of fossil fuels, is driving our rising global temperatures. Yet we go directly into harm’s way just to move the stuff. I’ve stood for hours in a flak jacket manning my .50 caliber mount while sailing through the Persian Gulf, ensuring the route that 35% of the world’s petroleum traded by sea stayed open. And it wasn’t just me; Army buddies have less-than-fond memories of protecting slow-moving liquid-fuel convoys through dangerous terrain in Iraq and Afghanistan.

These arguments — that climate change and our single-source dependence on oil are bad for national security — carry significant weight when they come from veterans. It is up to us to be out on the campaign trail, enjoying this brief moment in American politics where those aspiring to the highest office are required to interact directly with the broadest constituency. Tailor your questions to your candidates; for some, it is as simple as asking, “Why don’t you believe in human-caused climate change?” while for others, you might need to inquire as to the specifics of their clean energy plan.

And the thing is, these really should be softball questions. The solutions are knowable. Leaders across the country are pushing for 50% of our nation’s electricity to be generated from clean energy sources by the year 2030. Not only is this good for our national security, but it also creates jobs here at home. And when we invest in new technology, we set the stage for American leadership and create the products that we’ll be exporting to the rest of the world for the next century.

Veterans can validate the use of clean energy from a national security perspective because just as we’ve lived the problems, we’ve seen the solutions in action too. We know the best fighter aircraft and ships in the world can run on advanced, drop-in biofuels, and we’ve used solar-powered equipment in the field. Plus, we’ve seen the positive effects on the economic homefront, too; a full 10% of those employed in solar energy are veterans, with groups like the Solar Energy Industries Association actively working to raise that number even higher.

Moreover, on a larger scale, the fight against climate change has important implications for how America leads in the world — something that I personally care quite a bit about. The recent agreement reached between representatives of more than 190 countries in Paris is an unprecedented win in U.S. leadership on the issue; the outcome was non-binding, but it created a framework in which countries were required to set goals and report back. Leading by example — an American strength — has never been more important.

But we have to force the conversation. The Republican field’s record on addressing climate change is abysmal; in any given GOP debate, a majority of the participants on stage are record as climate change deniers (check out Texas Sen. Ted Cruz’s latest Senate hearing, if you haven’t already. South Carolina Sen. Lindsey Graham fearlessly spoke about the need to deal with climate change, but has withdrawn from the race, it seems hard to imagine the GOP taking up the issue any time soon.

The Democrats have been a little more direct. Former Secretary of State Hillary Clinton sees climate change as a global problem requiring American leadership, and Vermont Senator Bernie Sanders gets the national security implications of climate change. Still, too often Democratic debates feature no mention of climate change — an error of the moderators as much as the candidates. As an example, a recent Democratic debate on NBC only allotted two minutes to discussion of the issue.

No matter the party, the candidate, or the question, the takeaway is clear — climate change and clean energy matter, and voters deserve to hear more about them. Veterans can lead the charge here. If we’re brave enough to serve on the frontlines of conflict around the world, we can do it again on the frontlines of American politics.