The Most Common Mistakes Veterans Make On Their Resumes

Resume writing can feel like a chore and let’s be fair, it is, but it’s also essential if you ever... 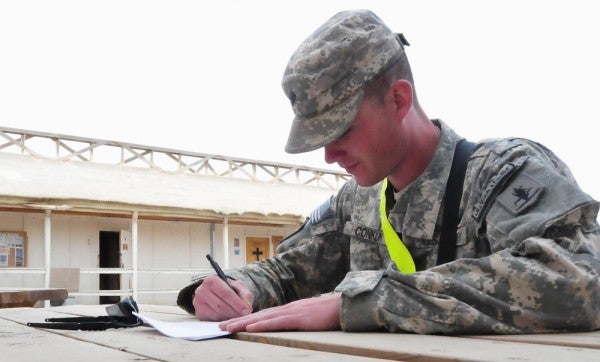 Resume writing can feel like a chore and let’s be fair, it is, but it’s also essential if you ever want to escape the unpleasant and often degrading rat race that is the job hunt.

Those transitioning out of the military leave the service with real-life experiences that set them apart from many of their civilian peers. Unfortunately, some veterans find themselves passed over for jobs they qualify for because they don’t know how to showcase their strengths, or worse, they make simple mistakes.

Task & Purpose reached out to Conditions Set, a nonprofit that helps veterans and service members with their job applications, to discuss the most common mistakes veterans make on their resumes.

Ben Vinograd, the chief executive officer of Condition Set, and John Thompson, the company’s president and a former Marine officer, filled us in on the common resume mistakes they see and how to avoid making them.

Related: Your resume absolutely needs this one thing.

Here are five surefire ways to get your resume ignored. Avoid these at all costs.

Making your resume too long.

The hiring manager who’s reviewing your application will likely be inundated with emails and resumes from other candidates, so time is of the essence. Want to torpedo your chances at landing that dream job? Write a four-page memoir about your time in the military.

“They’re going to give your resume 15 to 30 seconds first look, at most,” Vinograd says. “If they can’t get the key information out of the resume in that time, it’s not going to be looked at again.”

If you actually want to land the job, keep it short and sweet.

“You need to be able to keep your document as concise and succinct as possible,” says Thompson, adding it's a good idea to keep your resume under one page.

“As soon as you go over one page, it can more hurt you than help you,” explains Thompson. “We’ve had employers tell us, ‘If it goes over one page, i’m not going to read it.’ Some people are so emotional over that fact that they’re just straight up not going to look at it.”

Using the wrong format, or none at all.

In the military, perception is reality. If you don’t look squared away then you aren’t, even if that’s not actually the case. That doesn’t go away in the private sector and it goes double for your resume.

“It doesn't matter what the content is, the first time you look at it, if it looks like a bag of ass, that person is a bag of ass,” says Thompson, referring to how employers will react to a disorganized resume.

“It’s crazy how much just a little bit of structure will instantly make a resume look more polished,” continues Thompson. “If you’ve got a well-structured, good-looking template, you automatically get more points because it looks clean.”

If your resume is disorganized or has inconsistent formatting — different font sizes, randomly bolded or italicized text — your prospective employer isn’t going to spend the time trying to decipher what it all means.

Making your resume too broad or too specific.

The resumes that usually need the most work are either too broad or too specific, explains Vinograd.

“There’s the guys who put together two bullets of just really simple tasks they had to do that summarize what their role was, and the other extreme, guys write four pages of things they’ve done and they’ve only been in four years and it’s all paragraphs,” says Vinograd, adding that doing either is a bad idea.

“What it’s kind of showing is that they haven’t spent the right amount of time thinking of what they did and how to convey that to a civilian employer, either because they weren’t instructed on how to do it, or didn’t know any better,” says Vinograd.

Copy and pasting your billet description.

Seeing your exploits, achievements, and responsibilities laid out on paper may give you a warm fuzzy, but it doesn’t translate so well to the civilian sector.

“One of the things that annoys me is when it’s obviously a copy paste from their billet description,” says Thompson, adding that you should be showcasing your past work experience as it relates to the job you're seeking.

“You’ve got your job title, then it’s literally 30 bullets underneath and it’s ‘blah blah blah, responsible for hand-to-hand combat,’ and just all the random billet descriptions,” says Thompson, adding that “some of these get really long and they’re very detailed for all the random tasks you’re supposed to responsible for and know how to do.”

Doing that, shows that you’re “just basically not putting a lot of time into it,” explains Thompson.

Attention to detail shouldn’t go out the window when you take off the uniform, and making simple spelling and grammar errors on your resume sends your employer the wrong message.

“That is one of the quickest ways to have yourself disqualified or completely lose all credibility, because a recruiter is going to look at that and think, ‘He didn’t take the time to do a spell check then obviously he doesn’t care that much,’ and it basically goes into the ‘do not read’ pile,” says Thompson.

If you want the job, do a damn spell check.