In preparation for leaving active duty, I recently completed all of my pre-separation training — transition goals, plans, and success,... 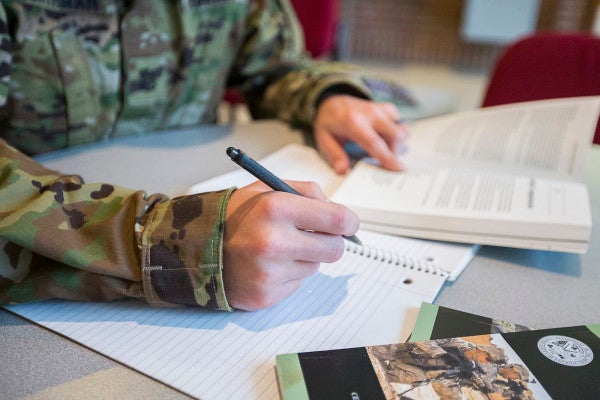 In preparation for leaving active duty, I recently completed all of my pre-separation training — transition goals, plans, and success, or ‘TGPS’ Capstone — and am now in the process of meeting with different organizations to which I was referred.

Because I already had a plan and a strong support system outside the military, I thought that the course would be a waste of time. I’m glad I was wrong. Through TGPS, I learned about resources that would be useful to all my fellow sailors if not just myself.

TGPS, which used to be called the Transition Assistance Program, surprisingly exceeded my expectations. It provided a wealth of information about different avenues for accessing educational and employment benefits.

While there are numerous resources publicized by TGPS as providing assistance with resume writing, interview skills, and navigating job boards, the same can not be said about finding the right educational institution.

The program was not particularly helpful for those who already had a college degree, and were seeking highly competitive jobs in the private sector, because the course is targeted at sailors separating after their first enlistment. What was surprising was how few people in the class fell into this category. My preconceived notions and biases proved inaccurate as most of my classmates were not junior sailors with only a high school diploma, at the end of their first enlistment, but mid-career professionals who stayed in for six to 12 years. The majority of my classmates were first class petty officers with part of a degree completed, and many had already graduated, including some who had enlisted already having a degree.

Related: How To get into an Ivy League school after the military.

For service members who found transition class insufficient, here are seven lesser-known organizations not affiliated with the Defense Department that you should try.

Mission Statement: “Service to School (S2S) is a 501(c)(3) non-profit that provides free application counseling to military veterans. Our goal is to help them win admission to the best universities possible and to help them maximize their education benefits.”

Check it out if you’re applying to the Ivy League or equivalent top-tier undergraduate or graduate programs. I personally worked with Service 2 School and was paired with a veteran with a similar background who is currently enrolled in a graduate degree program in my intended field of study. She helped me with my resume, essays, and was a great source of knowledge for comparing different programs. In addition, if you’ve got a degree, or are currently enrolled in a top program, you can volunteer to serve as a mentor.

Mission Statement: “The Posse Foundation believes it can leverage its unique recruitment strategy to identify those veterans who can excel at selective four-year institutions of higher education. By creating cohorts of veterans, preparing them for the college experience and supporting them through to graduation, Posse can partner with top colleges and universities and support up to 500 veterans in its pipeline annually.”

Posse Foundation is great if you’re seeking an undergraduate degree from a top college or university. The Posse Foundation Veterans Program specifies that most veterans seeking a college degree often seek to do so at community colleges or state institutions. Many who do this might be selling themselves short, but they lack the resources to access more competitive schools. The Posse Foundation not only assists veterans selected for its program with preparation for college, but also provides mentoring once enrolled. Posse’s veteran scholars are currently enrolled at institutions like Vassar, Wesleyan, and Dartmouth. The organization plans to expand the program to 12 schools, and participating schools are expected to ensure all students pay no tuition through combination of Post-9/11 G.I. Bill and Yellow Ribbon program resources.

Mission Statement: “Enlisted veterans often entered the military directly from high school, resulting in a long absence from the classroom upon their transition out. This has caused many veterans to feel discouraged and lack the confidence necessary for success in academia. To unlock the immense potential to succeed in higher education that veterans have, the Warrior-Scholar Project (WSP) addresses veterans' misperceptions about college and builds their confidence through an intense academic reorientation.”

Check it out if you’re planning to get a bachelor’s degree after separating. Warrior-Scholar Project offers one-to-two week long academic workshops on college campuses during the summer at top universities. The objective is to help veterans going back to school transition into an academic environment after a long hiatus, in order to set them up for success to do well in college and graduate.

Mission Statement: “Conditions Set is a nonprofit organization that provides free resume development and consultation to veterans and military personnel. Our goal is to help service members effectively convey their value to potential employers and facilitate their transition into the civilian workplace.”

Check it out if you’re working on your resume and looking for help translating your military skills to civilian employment. Every veteran could benefit from this resource — unlike a lot of the Department of Labor resources discussed in transition class, no less than two people who understand your background will review your resume. Where this comes in especially handy is when you may have omitted details regarding your military skills that would help communicate your qualification for a position.

Mission Statement: “Although 2.2 million women have served or are serving with the US Armed Forces, enormous barriers to equal treatment, equal opportunity and improved quality of life still persist. Removing these barriers and improving the quality of life for women veterans and service women requires attacking root causes in military culture and educating military and civilian stakeholders. Women veterans are themselves the best advocates for creating such change, but few if any programs exist to support their leadership growth. SWAN’s Women Veterans Fellowship in Leadership and Public Policy will create a cadre of women veteran voices to serve as advocates for creating change.”

Check it out if you’re a transitioning servicewoman or female veteran continuing to serve in the public sector or nonprofit world with an interest in advancing women’s equality. The fellowship takes place in July and August in New York City.

Mission Statement: “Veterans on Wall Street is an initiative dedicated to honoring former and currently military personnel by facilitating career and business opportunities in the financial services industry.”

Check it out if you’re pursuing a career in financial services. Veterans on Wall Street offers both mentorship and networking events. Recognizing that a strong worth ethic, drive, and teamwork are essential to both the military and finance industry, this initiative helps leaders coming out of the military connect with Wall Street.

Mission Statement: “VetsinTech supports our current and returning veterans with reintegration services, and by connecting them to the national technology ecosystem.”

Check it out if you’re hoping to work for Google, Amazon, a tech startup, or any of the other numerous companies that work to create innovation. The website enables you to upload your resume and be paired with a mentor who will help you translate your skill set in the corporate tech field.

In addition to these resources, numerous universities and employers have their own veterans interest groups who are willing to answer the questions of veterans interested in studying or working with them. The often have their own support networks and resources. I reached out to veterans’ groups at the graduate programs I applied to, and doing so was tremendously useful in helping me to understand the experience at those schools for someone with a similar background.

Be sure to mention other resources you’ve found success with in the comments.