The Pat Tillman Foundation was created in memory of its namesake, an elite pro-football player who walked away from the... 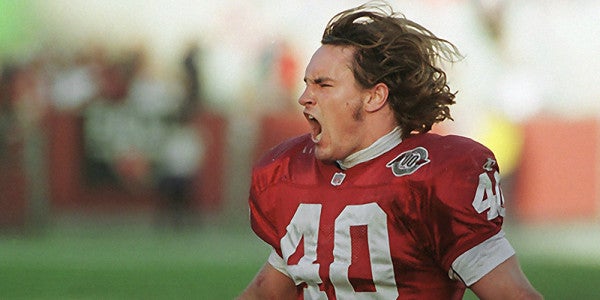 The Pat Tillman Foundation was created in memory of its namesake, an elite pro-football player who walked away from the NFL in the name of selfless service and was killed in action in Afghanistan in April 2004. Founded that same year, the Pat Tillman Foundation invests in military members, veterans, and spouses, uniting some of the best talent and leadership in the military community to continue their service. Over more than a decade, the foundation has invested more than $12 million in academic support and selected over 400 Tillman Scholars at more 100 institutions.

The Tillman Scholars program, which annually awards scholarships to 60 military veterans and spouses, is accepting applications now until March 1. The scholarship is more than a gift, it’s an investment in excellence and an opportunity to become part of a community of game-changers. Apply here, and read on to learn about six kickass accomplishments of the Tillman Scholars.

Worked in mission management at SpaceX. Tillman Scholar George Sondecker worked in mission management at SpaceX while attending business school, combining his aerospace engineering experience in the Air Force with a business education to help SpaceX customers launch spacecraft. George’s ultimate goals are to develop ways to lower launch costs — one of the greatest obstacles to space exploration — and work to develop space-based internet.

Served as a flight surgeon and medical mishap investigator. While serving as a Navy flight surgeon, Tillman Scholar Sarah-Blythe Ballard led medical mishap investigations for more than 20 incidents around the world analyzing, investigating, and reporting on accident prevention. Through her work, Sarah-Blythe developed a passion for aviation safety and innovative responses to disasters. While pursuing a doctorate degree in Global Disease Epidemiology and Control, she subsequently deployed as a civilian to develop air ambulance protocols in Liberia related to the Ebola outbreak. After completing her doctorate, she intends to return to the Navy to serve remote tropical populations with her extensive medical training and credentials.

Traveled by motorcycle from South Africa to Cairo. Tillman Scholar Erik Mirandette took a leave of absence from the Air Force Academy and set out on an adventure of a lifetime with his younger brother Alex — a motor bike expedition from South Africa to Egypt. At the end of their adventure in Cairo, a suicide bomber detonated in a marketplace. Erik was severely injured and his brother was tragically killed. After more than 30 surgeries, Erik returned to the Air Force Academy and spent the next six years leading counterintelligence teams. Erik is now pursuing an MBA focusing on entrepreneurship and innovation, and hopes to build a community of veteran entrepreneurs in regions of conflict.

Became the first African American class president at West Point. After growing up in Shreveport, Louisiana, as one of three brothers, Tillman Scholar Adrian Perkins was accepted to West Point where he served as the captain of the track team and became the first African-American cadet elected as class president in the history of West Point. Excelling as a soldier, Adrian began to see how lessons he learned during his military service could apply to communities in need. Now pursuing a law degree, Adrian intends to return to public service in Shreveport, using his law degree and legal training to solve complex urban and economic problems facing his hometown.

Worked as a fisherman in the Bering Sea. After a stint of homelessness, Tillman Scholar Josh Tarsky spent two years in the Bering Sea as a fisherman in some of the most treacherous waters in the world. Josh then enrolled in community college before matriculating into a theater program at Yale University. The events of September 11th led Josh to enlist in the Army after graduating. As a medic in Afghanistan, Josh realized that the causes of war often have roots in economic imbalances that stem from a lack of education. He earned his Master’s in Education and began teaching English. Now, Josh is working toward his law degree, taking night classes while he continues to teach high school, in an effort to directly influence systemic change through policy improvements.

Served as a doula. A devoted Marine Corps active-duty spouse, Tillman Scholar Lisa Rich homeschooled four children while their families endured deployments, military travel, and moves. After her experience of being alone during childbirth, Lisa became a trained doula to help other women give birth, sometimes in the absence of their partners. Lisa is now pursuing a master’s degree as a certified nurse midwife. As a midwife, she helps mothers and families have safe, compassionate, and evidence-based birth options. Eventually, Lisa hopes to open a birth center that serves at-risk populations, and to participate in international birth work.