You Can Now Earn A Degree In Flying Drones

The use of drone technology is on the rise, both in the military and the private sector. Seeing the potential... 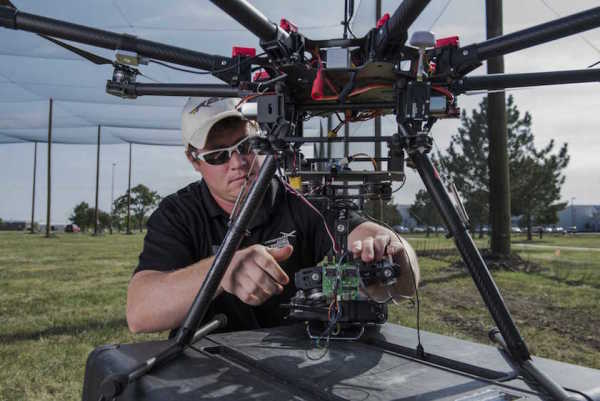 The use of drone technology is on the rise, both in the military and the private sector.

Seeing the potential for growth in the field, a number of colleges and universities across the country have launched tailored degree programs for students interested in pursuing a career in the emerging field of unmanned aerial technology.

The University of North Dakota was the first college program to offer a major in unmanned aircraft systems, fully launching in 2009. Though it started out with just 15 students, in 2016 program has enrolled just under 200 students.

Having a long history in manned aviation education allowed the school to leverage its now-thriving unmanned aerial systems program.

“We’ve been teaching future pilots and commercial pilots for over 40 years,” said Mark Hastings, chief pilot for unmanned aircraft systems for the John D. Odegard School of Aerospace Sciences at the University of North Dakota. “It’s an area we knew well and making the transition to UAS pretty natural.”

“All of our students are commercial multi-instrument pilots first, and then we convert them into UAS operators,” he said in an interview with Task & Purpose.

According to Hastings, a majority of the graduates from North Dakota go on to work for the military or defense contracting companies, operating platforms like the General Atomics MQ-1 Predator drone. It is a growing major among ROTC students, and the degree is also popular among former service members.

“We get quite a few that are former military here on the Post-9/11 G.I. Bill,” Hastings said.

Kansas State University was the second school to pursue an unmanned systems program soon after — its focus was more on commercial payloads.

It was originally funded by the state of Kansas in response to a devastating tornado in May 2007. The legislature wanted to fund UAS technology to serve in a first-responder capacity.

According to Michael Most, UAS program lead at Kansas State University, it was originally a certificate program, and a bachelor’s degree program grew from there in 2010.

Enrollment in Kansas’ program has doubled almost every year since it began.

According to Tim Bruner, a graduate of the program at Kansas who was hired onto its research team, “I loved airplanes and I wanted to do something with aircraft as a career.”

So the degree was a natural fit for him.

Related: Drone swarms? Pentagon brass have been playing too much Call of Duty »

In the fall, Most said, Kansas expects to implement a new curriculum with a lot more emphasis on flight training, similar to the way the Federal Aviation Administration flight training environment.

Currently, through their courses, students get a firm grasp on regulations associated with this area of flight, engineering and maintenance, and of course operations. In addition, the operations side of the degree requires and instrument rating and as a result, students at Kansas come out with a private pilot’s license.

Though primarily used to carry out missions for the military now, the civilian market is expected to catch up in coming years.

Each program seems to have a niche area of study. Whether the specialty is government, commercial sector, or research, it really varies from school to school.

“It covers the whole spectrum,” Bruner said. “We do a little bit of the pilot side… and then we get into the UAS-centered classes.”

As far as return on investment, a degree in unmanned aerial systems will likely lead to extremely good job prospects and salaries in coming years.

Nearly everyone he graduated with has a job in the field, according to Bruner.

In 2013, the Association for Unmanned Vehicle Systems International put out a report saying that by 2025, more than 100,000 unmanned systems jobs will be created nationally. The integration of these systems is expected to contribute $82.1 billion to the nation’s economy in the areas of agriculture, public safety, and others between 2015 and 2025.

Though it really depends on what the focus is, Hastings suggested a current ballpark average starting salary can be roughly $45,000 to $50,000. However, he also noted that for some graduates who work for the bigger defense contracting companies, those numbers can be significantly higher.

Now, the Federal Aviation Administration is exploring regulations for the emerging unmanned aerial systems market. In February 2015, it released small UAV guidelines. It is expected to submit a final report in April with recommendations on performance-based standards for the classification and operation of UAVs, particularly in the commercial air space.

Because this technology is relatively new, the institutions spearheading these programs are playing a key part in defining the role that unmanned aircraft systems will have in future airspace.