The Defense Advanced Research Projects Agency, often referred to as the mad science wing of the Pentagon, announced on May... 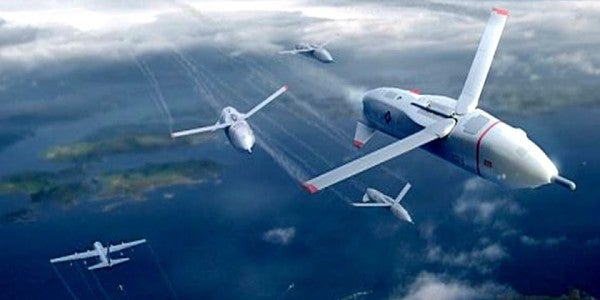 The Defense Advanced Research Projects Agency, often referred to as the mad science wing of the Pentagon, announced on May 9 that it plans on debuting its revolutionary Gremlin Unmanned Aerial System sometime in 2019. And much like the carrier classic military science fiction franchise StarCraft, defense contractor Dynetics designed the Gremlin to launch and recover from a flying mothership — in the case of the U.S. military, a Lockheed C-130 Hercules.

The system is truly innovative as far as drones go, effectively turning a C-130 into a flying aircraft carrier. While each deployable Gremlin drone on its own about the size of a small cruise missile launched and recovered using a slick Batman-style grappling hook, DARPA says its single C-130 can currently operate four drones at a time, all which are recoverable within 30 minutes at the end of a mission.

But in the long term, Gremlin drones should be deployable by any aircraft with a pylon or rotary launcher — which is almost all of them.

Indeed, these little suckers were designed to work in tandem, flying in formation and using networked data-links to share information and coordinate intelligence, surveillance, and reconnaissance taskings in contested airspace. And since they’re air-launched, a swarm of a dozen Gremlins could forward deploy ahead of strike packages (by, say, feeding data to F-35 Lighting IIs and further enhancing a commander’s view of the battlespace, eliminating the fog of war) or on short notice missions to do things like support a special operations team deep behind enemy lines.

The firm behind the Gremlin, Dynetics, is the same one that makes the terrifying and awesome Small Glide Munition which is an ‘enhanced capability, Stand-Off Precision Guided Munition’ that can be deployed by AC-130 gunships — which means they have some serious real-world experience with C-130 deployed payloads. Their Starcraft playing experience is also assumed to be high.

The inferred low cost and anticipated high number of deployable Gremlins (from the video shows dozens of them operating simultaneously) allows for what DARPA refers to as “Substantial Operational Risk Taking”: drones can go into areas with enhanced integrated air defense where human pilots or even expensive drones such as RQ-4 Global Hawks or the RQ-170 Sentinel would be shredded. But since Gremlins are both expandable and numerous it is a much better proposition to throw them at hard targets first.

The modular nature of the program also means that U.S. service members can configure each Gremlin with different sensor packages on the fly. The airborne recovery technology means they can be snatched out the air by a mothership, which sounds as cool and revolutionary as SpaceX landing rockets or, you know, this:

One can only guess what potential future applications DARPA has in mind for air-launched drone systems (an active seeker anti-air drone, perhaps?), but for now the Gremlin system will focus on providing extra intel on the cheap. The Gremlin will make its first flight sometime in 2019 and will most likely annoy Syrian air defenses shortly thereafter after.