The U.S. military has a lot of unmanned aerial vehicles in its arsenal. How do you tell them apart? By... 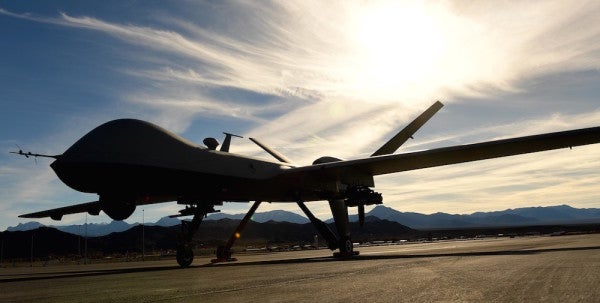 The U.S. military has a lot of unmanned aerial vehicles in its arsenal. How do you tell them apart? By numbers, who manufactured them, or what they do? Please. Be exciting. The Pentagon picks names — and while some are awesome, others leave something to be desired. But at least they aren’t as stupid as that time England tried to crowdsource a name for a new research vessel and wound up with a vehicle called “Boaty McBoatface.”

So here are 11 military UAV names, ranked from most excellent to least threatening.

The U.S. Air Force has employed the MQ-9 Reaper since 2007. It was first designed by General Atomics to serve as a long-distance hunter-killer UAV. And in 2015, one was used to take out ISIS operative “Jihadi John,” who killed a number of prisoners on camera. So, even though Blue Oyster cult says you shouldn’t, you should definitely fear the reaper. It will find you.

The AAI RQ-7A/B Shadow first deployed in 2002 with the U.S. Army. It’s used for reconnaissance, surveillance, and field assessment. Now, the Army and the Marine Corps train recruits on how to use them at Fort Huachuca in Arizona. And we think this is an apt name for a silent observational drone. There’s nothing more badass than the anonymity of a shadow. A-plus, stellar name.

The RQ-4A Global Hawk is a surveillance drone that has been in service since 1998. Owned now by Northrop Grumman, the Global Hawk was used by the Air Force in both the Afghanistan and Iraq wars. It’s the ultimate surveillance tool, able to deliver high resolution reconnaissance imagery using its electro-optical and infrared sensors. Being that it can survey as many as 40,000 miles of terrain a day, so we’d definitely say it lives up to its name.

General Atomics began producing the MQ-1C Grey Eagle for the Army in 2009. It’s been used in long-range firing missions in Iraq and South Korea. Did we mention that it can be fitted with Hellfire missiles? That’s right. It’s a grey eagle that rains down hellfire. If that doesn’t just scream “‘murrrica,” I don’t know what does.

The RQ-170 Sentinel is a CIA-operated drone, and as such, little is known about it, but the assumption is that it’s a stealth aircraft used for reconnaissance. And evidently, it’s the drone we used to stalk Osama bin Laden at his compound before SEAL Team Six performed its most famous raid. Talk about badass. Like any good sentinel, it really is a soldier that stands watch.

The MQ-8B Fire Scout was designed for reconnaissance, but it also provides aerial fire support to ground troops. All four branches of the military use the Fire Scout, and it can land on ship flight decks. As far as the name? It’s… adequate: The drone does fire rockets, and it also performs scouting missions.

U.S. Special Operations Command has used the CQ-10 Snowgoose for light cargo transport since 2005. By light cargo, we mean leaflet dispensing. Though it can carry other materials, it served primarily as a proverbial military paperboy. And its name is definitely as silly as the aircraft looks.

The Army, Navy, and Marine Corps began using the RQ-2B Pioneer in 1986. They played a big part in the Gulf War, providing gunnery support on Iowa-class battleships. While we have to thank Pioneer for its (aptly titled) role in early modern drone history, its name doesn’t suggest it’s particularly stealthy, nor does it strike fear into the heart of the enemy.

RQ-5A Hunter relay allowed the Army to share video in real-time. Though it was originally manufactured in Israel, Northrop Grumman acquired the design in 2002. It first deployed in 1995, and it was retired in 2015. On March 14, 2014, a Hunter drone reportedly went down over Russian-occupied Crimea, but the Pentagon denied it was surveying the area. If that’s true, we suppose, the Hunter drone became the hunted.

The Lockheed Martin Stalker is presumably used by Special Operations Forces. It is a hand-launched drone used for spying via aerial imagery, so we’d say it’s kind of like that girl you went on one date with who won’t stop texting you, showing up at your house, and making desperate pleas for you to meet her mom, like a creep. Terrible name.

Manufactured by General Atomics, the GNAT began flying reconnaissance missions in 1989, and still flies today. But its name is bad. We assume the only thing it can do is team up with a fleet of other GNATS to buzz around insurgents’ faces and annoy the shit of them until they declare defeat.