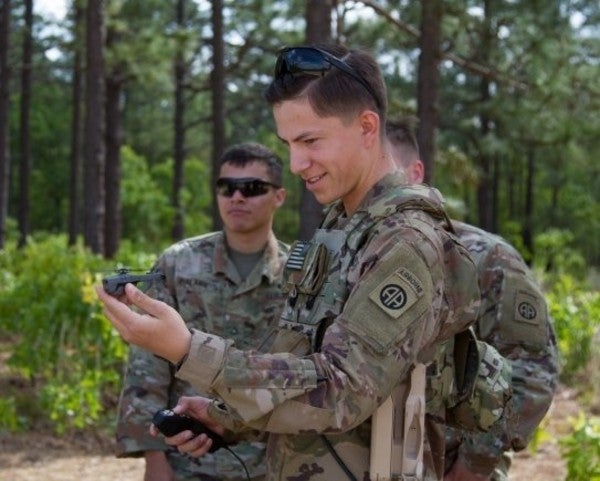 Those really sweet, hand-held drones that the Army bought in January were finally put to the test as they were fielded to some lucky soldiers for the first time at the beginning of May.

The Army said in a release on Friday that soldiers with the 3rd Brigade Combat Team, 82nd Airborne Division at Fort Bragg were “trained via classroom instruction” on the Black Hornet Personal Reconnaissance System — an Unmanned Aerial System (UAS) — from April 29th to May 3rd.

The 3rd BCT is going to be taking them on their upcoming deployment to Afghanistan this summer.

“I was really impressed with the system, its capabilities, and what it offers soldiers in terms of risk reduction,” Sgt. Ryan Subers, an operator being trained on the system, said in the Army press release. “This kind of technology will be a life-saver for us because it takes us out of harm's way while enhancing our ability to execute whatever combat mission we're on.”

The drone's size — weighing only 1.16 ounces, and measuring at just over six inches — makes it an invaluable tool for soldiers to “assess a situation from a cover and concealed position, mitigating the risk to the soldier,” the Army says. The head engineer on the project at the Army's Combat Capabilities Development Command Soldier Center (CCDC SC), John Paul Kruszewski, likened it to a flying pair of binoculars.

Another operator being trained on using the technology, Sgt. Dalton Kruse, said that the drone was “easy to pick up and fly, very user-friendly, and I can already tell that this system will benefit my unit downrange.”

In the meantime, anybody want to take bets on how long it takes for somebody to step on one of these things?