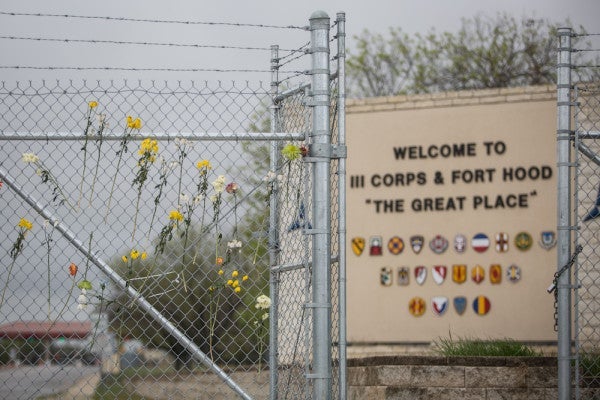 An independent panel’s review of Fort Hood released on Tuesday revealed an environment that has pushed women stationed there “into survival mode” and leaders asleep at the wheel, turning a blind eye to well-established problems within their ranks.

The Fort Hood report, put together by an independent panel of civilians and released by the Army on Tuesday, said that while there was a “clearly identified high risk” of sexual assault against enlisted women at the Texas installation, leadership went about “business as usual.”

“Numerous females soldiers reported that it is a daily battle to get through the day without allowing the multiple advances from male soldiers upset them. They explained that male soldiers routinely, openly, aggressively and relentlessly approach female soldiers,” the report says. “When soldiers explain this to leaders, they say they don’t have any way to stop that kind of behavior.

“The [Fort Hood Independent Review Committee] described this to a senior installation leader who stated, ‘what can I do about it?’”

The panel’s report stands as a searing indictment of the Army’s Sexual Harassment/Assault Response and Prevention (SHARP) program, both specifically at Fort Hood and broadly across the Army.

The report says that the “high risks” of sexual assault and harassment at Fort Hood “were known or should have been known by command leadership at all echelons,” especially in brigades in the 1st Cavalry Division and 3rd Cavalry Regiment.

While at Fort Hood, the panel conducted individual interviews with 647 soldiers — including 507 women — and group interviews that included over 1,800 soldiers and Army civilians.

“Some of the accounts of unreported sexual assault were extremely serious and had significant impact on the victim’s health and well-being,” the panel wrote in their report. “They had to work each day carrying this burden, and many described having to see the subject/predator working in the same or nearby unit. Narratives from these interviews invoke sadness and outrage.”

Meanwhile, group interviews conduct with male soldiers revealed “a satisfaction with the status quo” and a belief that it’s the job of their female colleagues “to adjust to the male environment.”

The panel members wrote that male soldiers “frequently shut down” and “essentially drowned out” female soldiers in the group who were voicing their concerns.

“There were many incidents when a courageous female soldier would speak up regarding her experiences with the SHARP Program or the flaws in the program, only to be contradicted and even ridiculed by other male members in the group in front of both the interviewer and the JAG Officer annotating responses,” the report says.

One woman told the panel that she overheard her NCO saying that “females are here for our entertainment.”

Another soldier said that her NCO “openly stated he did not want any females in his unit, but, now that they are here, they are sexual objects and ‘should be at his feet.’”

A female sergeant first class told the panel that sexual assault and harassment is “almost like an initiation to Fort Hood,” and that leaders “turn a blind eye or they themselves are the offenders.”

“One female soldier summed up the feeling of the women in these units by stating with visible emotion: ‘[T]his is us calling for help right now …we need help.’”

On Tuesday, Army Secretary Ryan McCarthy announced that 14 leaders from the squad to the corps level at Fort Hood were being fired or suspended, including Maj. Gen. Scott Efflandt, who was the acting Fort Hood commander at the time of Guillén’s death.

The commander and command sergeant major of the 3rd Cavalry Regiment, Col. Ralph Overland and Sgt. Maj. Bradley Knapp, were all relieved.

Overall, the panel identified Fort Hood as a case study in the Army for desperately needing “hands-on leadership.”

“If ever there was a need for intrusive hands-on leadership with regards to the health and welfare of troops, Fort Hood is and was the environment.”