Gun Silencers May Get Easier To Buy, But Their Makers Are Struggling

For months, producers and consumers of firearms sound suppressors — “silencers,” as most people know them — have been hopping... 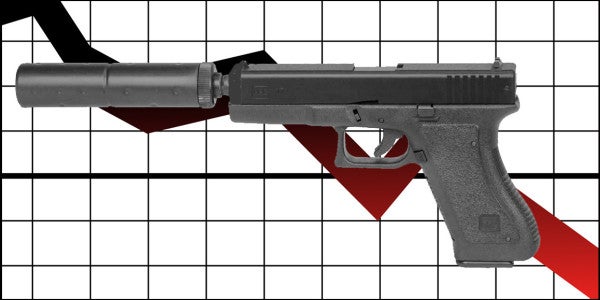 For months, producers and consumers of firearms sound suppressors — “silencers,” as most people know them — have been hopping with excitement about the prospect that their gear might get cheaper and easier to obtain under the new presidential administration.

But now, suppressor manufacturers are caught in a catch-22: While consumers are waiting for money-saving legislation to wind through Congress, they’re waiting to buy, too — and that’s cutting into producers’ bottom lines.

“We have definitely seen a decline. Everyone is waiting for to pass in the first 100 days, which will more than likely NOT happen,” Phil Sansotta, online marketing manager for GEMTECH, told Task & Purpose. “Sales have declined to the degree where mass layoffs are happening at SilencerCo, and many silencer companies are fearing for their business. Right now, everyone is trying to weather the storm.”

Ever since the National Firearms Act passed in 1934, silencers have been categorized as a “Title II” or “NFA weapon,” a class of highly controlled arms that includes machine guns, as well as sawed-off shotguns and rifles. To buy an NFA weapon, you have to submit an application directly to the Bureau of Alcohol, Tobacco, Firearms, and Explosives, pay a $200 transfer tax, and hang on to all your paperwork — especially the tax stamp that proves you’ve paid the ATF’s fee. It’s a slow, opaque process that can take half a year or more.

Many gun owners, who use suppressors to save their hearing while hunting or during frequent trips to the shooting range, think it’s an onerous process that marks them as bad-guy gunners. Many feel it infringes on their Second Amendment rights.

That’s where the Hearing Protection Act comes in. First introduced in October 2015, then re-filed this January by Republican Reps. Jeff Duncan of South Carolina and Rep. John Carter of Texas, the bill seeks to “eliminate the $200 transfer tax on firearm silencers” and “treat any person who acquires or possesses a firearm silencer as meeting any registration or licensing requirements of the National Firearms Act with respect to such silencer.” The bill, in effect, would categorize suppressors as more common “Title 1 weapons” and remove some of the financial and bureaucratic barriers to buying them. It would also permit refunds to anyone who paid a transfer tax on a silencer after October 22, 2015.

One major suppressor manufacturer, SilencerCo, has very publicly led the charge for the HPA, launching their “Fight The Noise” campaign and holding a high-profile interview with Donald Trump Jr. Many in the industry blame SilencerCo for the public perception that the HPA's passage is imminent. But as President Trump's administration approaches 70 days in office, little fresh progress has been made. Bills can take years to pass Congress — and that’s when Congress isn’t completely dysfunctional.

In the meantime, suppressor purchases are way down.

In addition to SilencerCo’s layoffs, other industry leaders are suffering. Griffin Armament, recently had to cut workers due to the market downturn. In a climb down from the company’s earlier optimism, Matt Pinnell, SilencerCo's public relations specialist, declined to discuss his company’s bottom line, but was sober about the HPA legislation’s prospects: “Historically, the average gun bill takes roughly seven years to pass.”

In an effort to keep customers buying, SilencerCo is currently offering an “in-house rebate” good for $200 worth of free SilencerCo gear, to offset the $200 NFA tax. While other companies have not yet gone to such extremes, there is genuine concern among suppressor manufacturers, Task & Purpose learned in interviews with more than half a dozen industry leaders.

Austin Green — the owner, founder, and lead engineer of Griffin Armament — has had to lay off 30% of his employees, he told Task & Purpose. “That was painful,” he said. “We've had to strategically change purchasing decisions,” he added, foregoing plans to “buy equipment designed to make us more able to meet increasing levels of demand.”

It’s getting worse, not better. 2017’s outlook “is 40% the sales of 2016,” Green said. “We've introduced costly promotions that reduce our profitability and, in turn, our ability to respond to increases in market demand.” Some of the blame for the downturn, he felt, lay with the industry’s main lobby group, the American Suppressor Association, and its boosting of the HPA. While Green isn't optimistic about the chances of the HPA passing, he believes that even if it did, the damage the downturn has done would mean “it would be months before this industry could respond adequately to demand and supply the market adequately.”

John Whitely of Georgia-based Liberty Suppressors agrees there’s a misperception in the general public that the HPA “is all but a done deal and its passing is imminent,” but he maintains his support for the industry’s lobby. “We have confidence in the American Suppressor Association and their work on the HPA,” he said, “but people just need to be realistic in their expectations for if and when it does pass.”

Knox Williams, the American Suppressor Association's president, told Task & Purpose Iin a phone interview that while the ASA is seeking to push the Hearing Protection Act “as hard and fast as possible,” the group never claimed that the bill would pass in the first 100 days of the Trump administration. All the ASA wants to do, he said, is “build the industry, expand consumer ownership and allow people to protect their hearing.”

One of these factors arose last year, when the ATF issued Rule 41F, requiring background checks on all “responsible persons” in a “suppressor trust” — a legal entity that made it easier for individuals to keep a silencer in the family and share its use. The new rule, which was perceived as adding another hurdle to suppressor ownership, was announced in early January 2016, but didn’t go into effect until July 13 — and in the meantime, buyers who wanted to avoid the new red tape fueled a boom in suppressor sales.

Another unforeseen factor was Donald Trump's surprise presidential election. In recent years, the firearms industry has seen sales booms driven by fears that Democratic administrations would expand firearms regulation. Many felt a Hillary Clinton victory in 2016 was assured, which led manufacturers to increase production to meet panic-driven demand in the runup to November's balloting. Trump’s presidency has seen a marked slowdown in gun-buying as the anticipated threat to gun owners receded: January 2017 saw 500,000 fewer background checks performed for firearms purchases compared to last year. This has left companies with a large amount of unsold inventory creating a buyer's market.

The HPA is currently being reviewed by two different committees in Congress. While ASA’s Williams confirmed to T&P; that the bill had collected a mind-boggling number of co-sponsors — 121 in the House and 11 in the Senate* — he also warned that it could take more than nine months for the HPA to hit President Trump’s desk.

On one thing, the ASA and all the manufacturers who spoke to T&P; agree: If you want to buy a suppressor, don’t wait. Even with a friendly Congress and president, it’s not at all clear that your deals will be much better in a year.