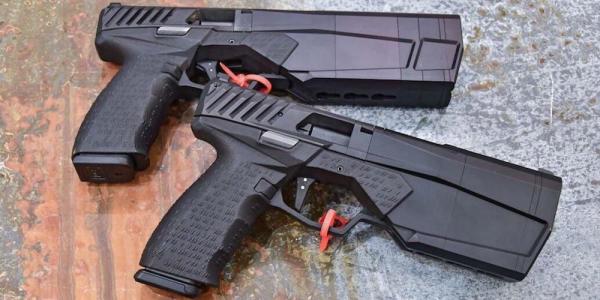 To mark the launch its new Maxim 9 integrally suppressed pistol, SilencerCo released a slick new video flaunting the sidearm's versatility in the most visceral way possible: through the eyes of the shooter.

Josh Waldron, SilencerCo’s CEO and co-founder, said the company produced the short film showcases a number of real world scenarios “where the user wouldn’t have the time or ability to put on hearing protection.”

SilencerCo has a history of innovative promo videos. In late 2015, the company dropped the delightful “Maxim Vice,” a hilarious nostalgia-filled, 80s-themed short film that saw its cop protagonist take on a horde of bad guys with a Maxim 9.

Excited to show how the new pistol works practically, SilencerCo’s new video depicts some interesting scenarios, from a homeowner defending his property to the tense patrol of a police officer or special operators to a father teaching his young daughter how to shoot.

All of the vignettes are shot in a first-person perspective, and Jace LeRoy, SilencerCo’s videographer, explains that the entire video was filmed using GoPro action cameras to “give an authentic and genuine feel to each situation.” It works, putting us in the saddle as a cowboy riding through the desert when he encounters a rattlesnake – which the Maxim 9 quietly dispatches the snake without startling his horse.

The video is keen to demonstrate the benefits of having a pistol that you don’t need to think about attaching a separate suppressor to. The driver is attacked by an angry mob and when one assailant smashes his windscreen he pulls his pistol and opens fire – in the confines of a car, with an unsuppressed pistol, this would normally have been extremely loud.

But it's not just self-defense situations that are depicted in the video. Two sequences show how the Maxim 9 might be useful in a training and recreational shooting: A father teaches his daughter how to shoot a handgun without having to worry about the loud report of a pistol scaring her, while a shooter can hear every hit while he runs a pistol course.

The Maxim 9 is available from SilencerCo dealers now with a manufacturer's suggested retail price of $1,499 (plus $200 tax stamp), which the company is keen to emphasize is less than buying a quality pistol and silencer separately.