The History Of The CIA’s Silent Pistol Of Choice

On the May 1, 1960, the cockpit of a U-2 high altitude reconnaissance jet, flying deep in Russian territory over... 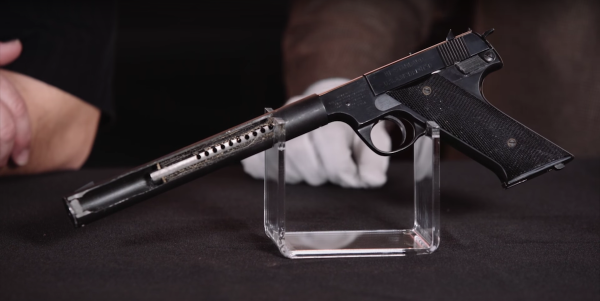 On the May 1, 1960, the cockpit of a U-2 high altitude reconnaissance jet, flying deep in Russian territory over the Ural Mountains, rings with the sound of its missile warning system as the aircraft is pursued by no fewer than 14 Russian S-75 Dvina surface-to-air missiles.

One of these SAMs strikes the rear of the U-2, shearing off its tail and sending the jet into an inverted spiral down into the Russian countryside. Inside CIA pilot Francis Gary Powers struggles to eject. As he finally manages to eject from his aircraft, he becomes acutely aware of the failure of his top secret photo-reconnaissance mission. Powers is 1,300 miles deep into Soviet Russia and has photographed some of Russia's most secret installations. On landing, he is quickly captured and his survival kit confiscated. Inside is a small, silent, but deadly pistol: a High Standard HD 22.

Francis Gary Powers wearing special pressure suit for stratospheric flying was an American spy whose Lockheed U-2 reconnaissance plane was shot down by a Soviet surface-to-air missile outside Sverdlovsk.Photo via Wikimedia Commons

Powers was one of many CIA employees to be equipped with the suppressed High Standard. In his survival kit, along with a map, compass, money and a poison pin, included a suppressed .22 caliber High Standard HDM/S. Once captured the Soviet authorities were quick to call Powers’ weapon a “spy pistol” and convicted him of espionage. The story of the suppressed High Standard began during World War II when it was put to clandestine use by both the British Special Operations Executive and the CIA's predecessor, the Office of Strategic Services.

The .22LR suppressed High Standard pistols were widely used during both the Second World War and the Cold War. When the United States entered World War II, the U.S. military quickly bought up all available .22LR target pistols for marksmanship training purposes. Prior to this, however, several modified High Standards had already been developed by the British SOE for use by operatives in Nazi-occupied Europe.

The company that manufactured the Western powers’ favorite suppressed pistol was founded by Carl Swebilius in 1932 as the High Standard Manufacturing Company. Swebilius, an experienced engineer and foreman, had also worked for both Marlin and Winchester. At the outbreak of war in 1939, High Standard Model B pistols began to be exported to Britain — these guns were the first to be modified. In 1942, the U.S. War Department purchased High Standard's entire inventory, regardless of model, to keep up with demand new simpler and faster to produce models were developed. The Model HD became the most manufactured with 34,000 made by the end of the war.

Initially, the OSS used .22LR Colt Woodsmen paired with old suppressors made in the 1920s by the Maxim Silencer Company, but the Woodsman's long barrel and the additional length of the suppressor were not ideal for clandestine warfare. As early as 1942, the British had adapted Model B pistols by adding an integral suppressor enclosing the entire barrel, effectively halving the weapon's length. In 1943, the OSS requested a similar weapon. The result was the Model H-D M(ilitary)/S(ilenced) or HDM/S. The technicians at Electric Bell Laboratories developed by the new gun's suppressor. Its manufacture was completed in secret and the guns themselves were code-named “Impact Testing Machines.”

These Impact Testing Machines were 13.8 inches in length, weighed 48 ounces unloaded, and had a 10-round magazine. Unlike stock High Standard pistols the HDM/S had a slide lock that could be used to prevent the gun from making a sound by locking its action closed, making it a near silent single-shot weapon. The barrel was ported with four rows of eight (later 11) holes. From these holes the propellant gases from the fired cartridge escaped into a zinc-plated bronze mesh, which acted as a heat sink that slowed the gases exit from the muzzle. Closer to the muzzle, a second chamber was filled with bronze wire screens further slowing the exit of the gases.

A common OSS trick was to fill the second chamber with liquids such as water, oil, or even shaving cream and seal the muzzle with tape. This maximized the efficiency of the suppressor and the only sound heard when the pistol was fired was the mechanical function of the action. The suppressor could reduce the pistols report to as little as 20 decibels — about as quiet as a person whispering. The mesh and wire screens would last for up to 200 rounds before they needed to be replaced.

One issue that arose was that lead .22LR commercial ammunition initially used was not jacketed. The rules of war, laid out by the Hague Convention of 1899, required that no unjacketed rounds were to be used against combatants. While officially the use of commercial all-lead rounds was banned and jacketed ammunition developed, the OSS and SOE had little qualms about using any ammunition available.

The SOE used its suppressed High Standards across occupied Europe from France to Albania. The OSS issued them to operatives throughout Western Europe and North Africa. These guns also saw service in the Far East and Pacific theaters. It was advised in training that, for maximum effect, the pistol's muzzle be placed against the target; however, the weapon was effective at up to 50 feet. Approximately 2,600 suppressed pistols were made by High Standard, using the Bell Labs suppressor, by the end of the war.

While the OSS was disbanded at the end of the war, the organization's inventory of suppressed High Standard pistols was passed to its newly formed successor, the CIA, in 1947. The CIA issued the pistols to field operatives as well as members of the Detachment 10-10, the pilots, like Gary Powers, who flew the CIA's U-2 spy planes. The High Standard Powers was captured with is currently resides in a Moscow museum along with wreckage of his plane.

During the Vietnam War, the .22LR suppressed High Standard pistols were again used by both CIA operatives (including Air America pilots) and Special Forces members of the classified Studies and Observations Group, including the Navy SEALs and Army's Green Berets. The pistols were put to use during a variety of operations including long-range reconnaissance patrols, snatch missions, ambushes, and assassinations. They were one of a range of suppressed weapons deployed and found use assassinating enemy officers and Communist Chinese observers, during snatch raids to capture high-ranking prisoners and in shallow penetration raids into Laos and Cambodia. Perhaps the most high-value target killed by a High Standard pistol was a North Vietnamese People’s Minister of Mobilization, shot in a crowded Hanoi square — the operative who shot him escaped unheard and undetected.

During the war in Vietnam, the World War II-vintage pistols were joined by newly made pistols modified to use a new suppressor developed by Frankford Arsenal in 1967; however, these proved less efficient and more bulky than the original Bell Labs design. The suppressed High Standard HDM/S pistols remained in CIA and special force's inventories well into the 1990s and a number probably are still retained today.