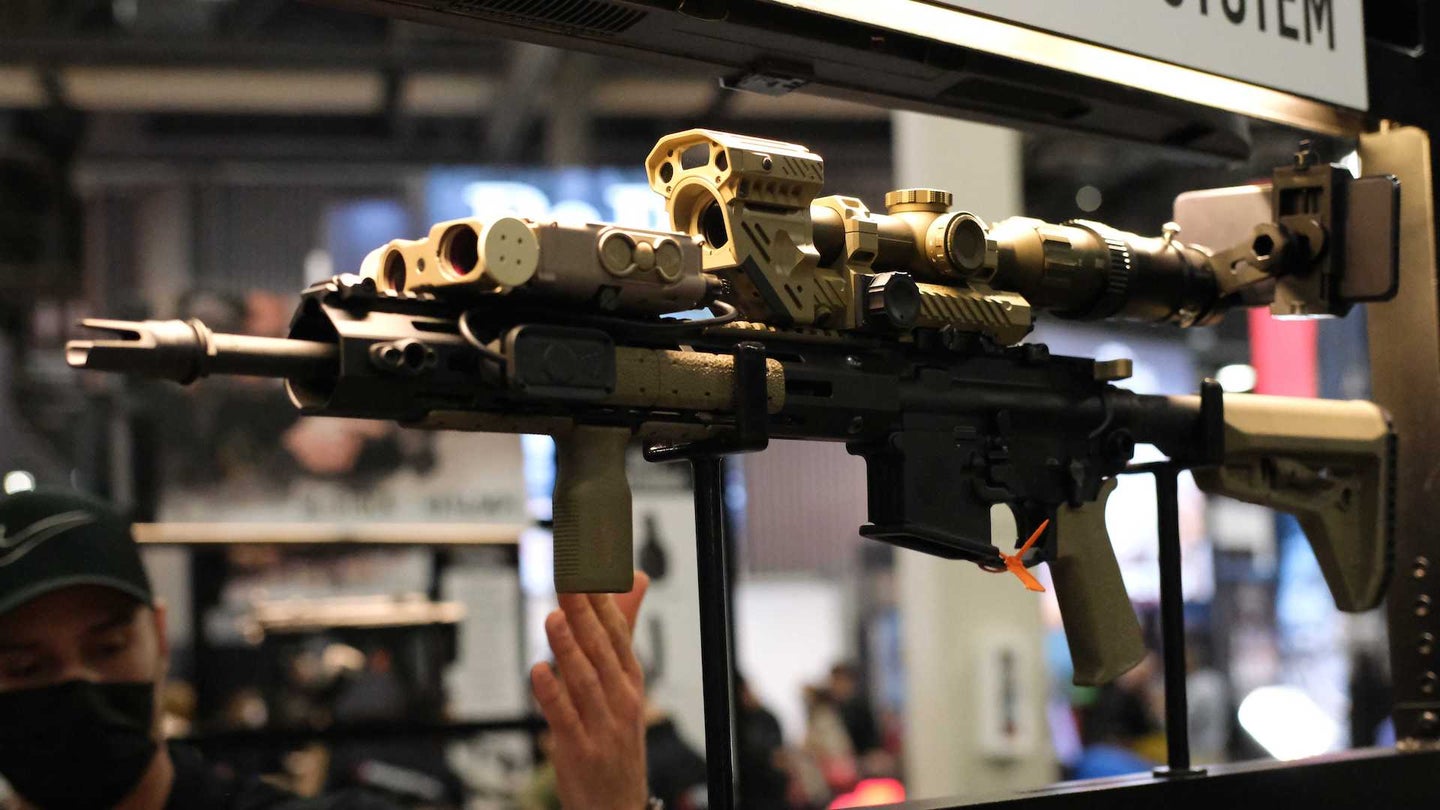 Editor’s note: the Task & Purpose gear team is reporting from SHOT Show 2022 in Las Vegas, Nevada. Follow us on Facebook, Instagram, or Twitter or send us an email at thegearlocker@taskandpupose.com with what you want to see.

There are a few universal truths about firearms in video games, save for those games that make a big deal out of how “realistic” they are: you know how many rounds you have in your magazine and on your body at any given time, you can know exactly how far away your target is, and there’s rarely any need to worry about bullet drop. These unrealistic firearms features, once mere fixtures of science fiction, are now on the verge of becoming a reality — at least if two firearms parts manufacturers have anything to say about it.

At SHOT Show 2022, Maztech and Magpul debuted what they call the X4 Fire Control System, a suite of electronics that the two companies claim will turn any rifle of any caliber with a low power variable optic (LPVO) into a computer-aimed weapon system. According to the companies, the smart optic will continuously feed you firing data and maintain an updated round count, a concept that inspires visions of both the MA5B Assault Rifle from Halo: Combat Evolved and the M41A Pulse Rifle from Aliens.

The X4 system consists of an optic mount, a laser aiming module, a round counter built into the rifle pistol grip, a rail-mounted round count display, a control keypad, and specialized digital magazines that feed the system information on how many rounds each mag contains.

The optic mount places an overlay display in front of your LPVO to project relevant firing data completely independent of your optic’s etched crosshair. This mount supports any LPVO that has a tube diameter of 30mm or 34mm and is completely agnostic of your optical zero, which means, according to the Maztech representative at SHOT Show, that this system can even be used with a cheap optic that doesn’t hold zero very well and can help hold zero digitally on weapons like the FN SCAR-17, which is infamous for beating optics to death with harsh recoil.

On top of the scope mount is a laser rangefinder that gathers distance and direction data and synchronizes wirelessly with the display, allowing the shooter to immediately know their holdover and then use the digital bullet-drop compensator reticles projected on the screen to ensure first-round effects in terms of elevation adjustments. According to the companies, making the bullet drop compensator work with your particular barrel length, rate of rifling twist, caliber, projectile weight, and loading is as simple as using a mobile app to input the data or using the buttons on the keypad to cycle through modes on the optic.

The futuristic round-counting is achieved with digitally-enabled magazines and a special pistol grip that feeds the number of rounds in the magazine, as well as the user’s pool of ammunition in other digitally-enabled magazines, into the display of the optic. The round count in the current magazine can also be displayed on a wireless rail-mounted LED screen, providing an easy at-a-glance view into how close you are to your next magazine change. This is all to say that this is what Magpul and Maztech hope will happen since this is not a finished product in any regard.

Even a novice observer will notice that the X4 system isn’t exactly compact. The added bulk is incredibly noticeable, made worse by the fact that the demonstration weapon was mounted with an Army STORM 2 Laser Aiming Module, the large box on the front of the rifle. During their showcase at SHOT Show, Magpul and Maztech had the X4 mounted to a heavy Radian Model 1 rifle, which is a rifle that I don’t have much experience carrying so I can’t state if the rifle is significantly more bulky or heavy with the attachments.

Maztech claims that the X4 scope mount, including an LPVO, is only 20 ounces. However, it’s safe to assume that the scope mount, round counter, round counter display, and laser rangefinder won’t be weightless and that the system will weigh significantly more than the standard M4 rifle, even one with a PEQ box, ACOG, flashlight, and suppressor, especially since this system does not replace things like white-light weapon lights, IR Illuminators, suppressors, and foregrips. The Maztech representative countered my concerns by asking the rhetorical question of whether or not getting a perfect shot every time was worth the extra weight.

Then there’s the matter of round counting. I’m unclear on its exact functionality given that I personally witnessed the Maztech representative eject dummy rounds from one magazine that was not in the weapon and then another magazine, and the computer decided that one was the round in the rifle and the other was stored on the body. Interestingly enough, even the representative couldn’t tell the difference between which magazine was “in” the weapon and fumbled that in the middle of his demonstration, through no fault of his own. This is still not very reassuring.

Another concern is battery life, which Magpul and Maztech didn’t elaborate on with regard to the laser rangefinder, round counter, or other accessories. However, the scope mount is powered by either rechargeable 18650 batteries or CR123 batteries, and Maztech claims that the battery life is a full year if you only use the system for 10 hours per week. All of these electronics are powered by something, and especially when wireless technology is involved, my concern with regard to battery life is one of my primary reservations with the system.

Finally, the question of cost-benefit analysis comes to mind, since although they couldn’t give me a solid price given that this is a prototype, the companies said it would be much less expensive than similar rangefinding systems from other companies that cost upwards of $8,000, and with the added benefit of round counting and variable displays.

Claiming to do way more for way less is highly dubious in any setting, and the claims of the X4’s capabilities Magpul and Maztech levied made me wonder where the companies have sacrificed quality. I hope to be proven wrong though, since this system sounds amazing on paper and definitely a huge boon for shooters who anticipate engaging targets at an unknown distance — although, unfortunately, it does not seem to be aimed at the military market whatsoever.

At the moment, the X4 is still in development, and Magpul and Maztech didn’t leave any hints as to when a finished product might actually hit the market. Until then, we won’t know if a real-life Halo assault rifle is actually a possibility or just another figment of science fiction.