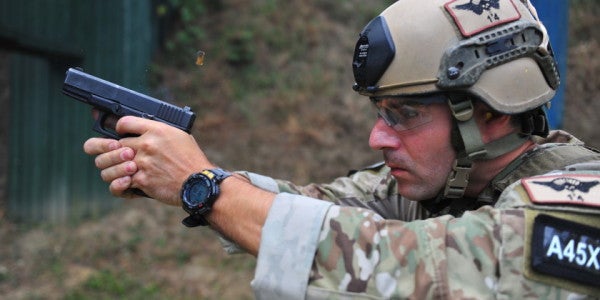 The U.S. Army's chief of staff is searching for alternatives to the multi-year Modular Handgun System effort, to include piggy-backing on Army Special Operations Command's current pistol contract.

Gen. Mark Milley has used recent public appearances to criticize federal acquisition guidelines that all services must follow when choosing and purchasing weapons and equipment.

During a March 10 speaking engagement at a conference in Washington, D.C., for instance, Milley chastised a bureaucratic acquisition system for making it overly complicated to field equipment in a timely manner, citing the service's Modular Handgun System, or MHS, effort as a prime example.

Milley criticized the program's 356-page requirement document and lengthy testing phase slated to cost $17 million for technology that has existed for years.

But behind the scenes, Milley has moved beyond criticism and taken steps to select a new sidearm for soldiers, including exploring the possibility of bypassing the MHS effort altogether.

Milley recently asked the Army Special Operations Command's G-8 office, which oversees fielding of equipment, if there is room for the Army to join its pistol contract to buy Glock 19s, according to a source who asked to remain anonymous because he is not authorized to speak to the media.

The compact Model 19 is one of Glock's most popular handguns. The striker-fired, 9mm pistol features a four-inch barrel and has a standard capacity of 15 rounds, although 17-round magazines are available. The polymer frame features an accessory rail for mounting lights.

With that price, the Army would pay about $91.8 million if the service were to buy 287,000 pistols, the quantity requirement outlined in the MHS effort.

Currently, the MHS program is projected to cost about $350 million, Army officials maintain.

But choosing the Glock 19 would abandon one of the major goals of the MHS effort: to adopt a pistol chambered for a more potent round than the current 9mm. The U.S. military replaced the .45-caliber 1911 pistol with the M9 in 1985 and began using the 9mm NATO round at that time.

Most special operations forces, however, use 9mm pistols and a new Defense Department policy that authorizes “special purpose ammunition” now allows the military to use expanding or hollow-point bullets, experts maintain.

Military.com contacted Milley's office and USASOC for comment but neither office responded by deadline.

Milley has also asked Defense Secretary Ashton Carter to grant authority to the service chiefs to approve the acquisition of equipment that does not require new technology or research and development, the source said.

“I think it's absolutely ridiculous that you don't have the authority to pick a pistol for the Army,” Rep. Austin Scott, a Republican from Georgia, told Milley during last week's House Armed Service Committee hearing. All of the service chiefs were present.

“I would bet that the four of you in uniform could probably in 10 minutes come up with an agreement on what that platform should be,” he said. “I would think that with a quick click or two on an iPad that you could figure out what the retail price of the pistol was, what a decent price for that pistol was and what we should be paying for that pistol if we were buying it in the quantities that we were buying it in.”

The congressman added, “I want you to know that I do believe that you should have that authority.”

“I can't help but wonder that if it's this bad with a pistol, what about optics, what about rifles; all of the things we are buying? How much bureaucracy is in there? What we could remove that would allow you to equip your men and women better, faster and with less money?” he said.

Scott encouraged Milley, and the other service chiefs, to come up with “specific language you would like to see in the National Defense Authorization Act that would help you cut through that red tape.”