The Marine Corps’ much-hyped M27 Infantry Automatic Rifle may have picked up a much-needed cost reduction, but the rifle’s troubles... 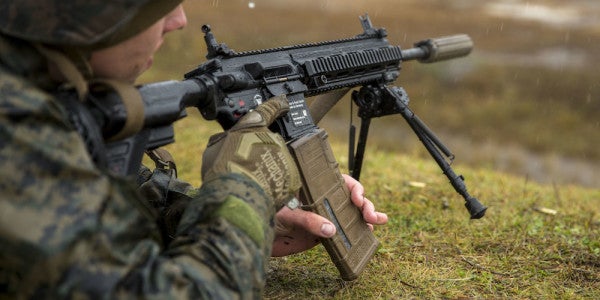 The Marine Corps’ much-hyped M27 Infantry Automatic Rifle may have picked up a much-needed cost reduction, but the rifle’s troubles are still on full display.

Just days after the Marine Corps announced its intent to buy 15,000 M27 IARs from Heckler and Koch at around $1,300 per weapon — down from the eye-popping $3,000 price tag that rankled lawmakers in March — The Firearm Blog published a leaked copy of a 2016 report on M27 testing that raises questions about whether the new rifle is ready to field. A Marine expert, however, told Task & Purpose the Corps has already addressed the issues that emerged in this troubling report.

The test, conducted by Marine Corps Systems Command’s Infantry Weapons Product Management Office at with 9 IARs outfitted with suppressors and firing some 2,700 rounds of 5.56mm ammunition, appears troubling on its face. The platform reportedly experienced frequent bolt-over-brass malfunctions associated with a high cyclic rate, resulting in frequent stoppages from the weapon’s failure to fully feed each round from its magazine. That high cyclic rate, The Firearm Blog argues, will pose serious issues for the M855A1 Enhanced Performance Round that, officially adopted by the Marine Corps last year, has faced problems with the M27 in the past.

When reached for comment by Task & Purpose, however, MARSYSCOM declined to comment on both the authenticity and contents of the M27 report. So Task & Purpose called up recently retired 2nd Marine Division Chief Warrant Officer 5 Christian Wade, who oversaw infantry modernization efforts that included the IAR and authored a strong defense of the platform in March — and according to Wade, the issues detailed in the 2016 report weren’t about the platform itself but the magazine and rounds used.

“At the time, a whole bunch of different elements came together and didn't fall into place,” Wade told Task & Purpose. “For one, the followers in aluminum magazines don’t particularly like to feed the last 5 rounds into the weapon. The Corps immediately fixed that problem.”

According to Wade, the stoppage and loading issues were solved shortly after testing detailed in the 2016 report through three adjustments. First, the Corps replaced those problematic aluminum mags with Magpul’s polymer GEN M3 PMAG, which solved the ammo feeding problems that were resulting in stoppages; Second, the Army (which owns the M855A1 EPR round technical data) has made “adjustments” to the cartridge in recent years to accommodate high pressure and excess heat posed by platforms like the M27.

But third, and most importantly, Marines downrange don’t even use the EPR anyway, despite the Corps’ recent adoption of the round and statements to the contrary by Corps officials.

“I was involved with the Marine Corps forces who deployed as part of Task Force Southwest ,” Wade told Task & Purpose, “and the Marine gunner who deployed there with the first detachment in the spring of 2017 arranged to use the 5.56mm Mk318 Mod 1 Special Operations Science and Technology (SOST) round.”

It’s worth noting the report isn’t just about the M27 platform. The testing was actually focused on the M38 Squad Designated Marksman Rifle, designed to evaluate the “feasibility and practicality” of fielding the M27 as a “Special Purpose Rifle (SPR)” like the Mk 12 SPR. While the M38 variant isn’t explicitly mentioned in the report, the testing explicitly focused on examining “the use of a ‘more advanced optic’ than the Squad Day Optic (SDO) and ‘suppressing’ the M27 IAR in order to enhance the capabilities of this weapon system,” according to the report.

Indeed, December 2017 DoD photos show the M38 rocking both suppressors and, according to Soldier Systems, a Leupold TS-30A2 Mark 4 2.5-8x36mm Mid-Range/Tactical Illuminated Reticle Scope. But while the Leupold scope met requirements during testing, the War Zone notes that the scope itself “a dated design that the Marine Corps reportedly chose because it already had them in inventory, left over from the Mk 12 Mod 1 rifles” — a choice that doesn’t necessarily inspire confidence that the Corps is trying to field its best possible equipment to troops downrange.

That’s OK! After all, the M38 will end up fielded with the Leupold scope to meet an urgent forward-deployment requirement for riflemen in the designated marksman role while Marine scout snipers get to lay with the new Mk 13 and CSASS sniper systems the Corps plans on adopting. “We knew the scope isn’t optimal,” explains Wade. “It’s not the best, but it fills an urgent, universal needs statement. It’s meant to be fielded quickly, not fielded permanently.”