You might be surprised by how simple red dot sights are — or how long they’ve been around. 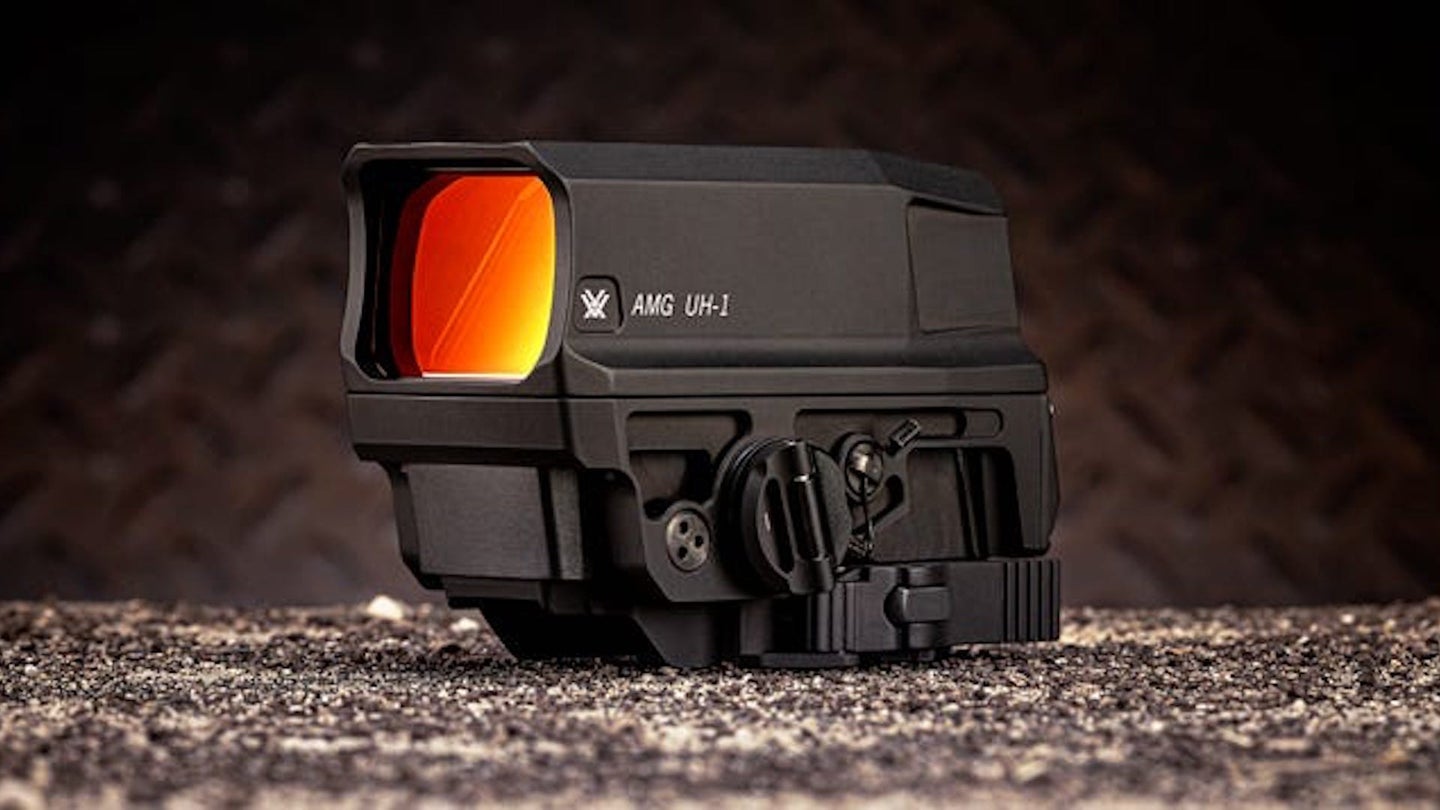 If you’ve ever been to a shooting range, on deployment, or just fired up Call of Duty, you’ve almost definitely seen a red dot in action. Red dot sights are quickly becoming one of the most popular accessories for rifles and pistols. These battery-powered devices use a simple LED to create a point of aim that’s quick to spot, easy to use, and affordable to own.

If iron sights are the OGs, think of a red dot as new kids on the block. They’re not the high-power scopes of the long-range rifle world, but imagine a zero-power optic without all the hash marks for windage and elevation.

Red dots come in a few different configurations and are surprisingly inexpensive to add to your preferred weapon. There are tubes and open optics; reflex and holographic reticles. Premium red dot sights offer more durability, additional reticle options, and finer dots that allow for more precise shot placement. All have the potential to excel in the right circumstances, and all require training to master. Luckily, you have us, the Task & Purpose’s editors here to provide some of that training.

How does a red dot sight work?

The technology behind red dot sights is surprisingly simple. In fact, the first reflector sight was patented in 1900 by Howard Grubb, an Irish telescope builder. What we know as red dot sights were used on aircraft in World War II and by small-arms owners as early as 1945.

In a modern reflex red dot sight, a battery is used to power a single LED. This LED projects either a red or green light onto a concave lens. Thanks to a special coating, that illuminated point becomes visible to your eye. Because the dot only appears on one plane, there is no sight alignment required. It’s really that simple.

Holographic sights take this technology a step further by directing a laser along a series of mirrors inside the optic. As a result, the reticle remains unchanged by external magnifiers and doesn’t suffer from parallax distortion. In fact, holographic red dot sights will continue to function accurately even if the lens is partially broken or obscured. As long as some glass is present and visible, the reticle will appear and continue to work properly.

One disadvantage of red dot sights is the parallax effect we mentioned earlier. This kind of distortion happens when the reticle moves in relation to the shooter’s head. Parallax distortion is most common at very close ranges (usually less than 25 yards), so practical accuracy doesn’t suffer too much. The amount of parallax distortion differs between makes and models, as well.

Another limitation of traditional reflex-type red dot sights is the fact that the reticle increases in size when paired with a magnifier. That means that a three-MOA dot, which appears to be three inches in diameter when placed on a target at 100 yards, will appear to be nine inches in diameter on the same target when paired with a three-power magnifier. This makes it harder to see and accurately engage your target.

The pros and cons of red dot sights

Red dot sights are one of the most versatile and affordable optics available, but they aren’t for everyone. They can be used with both eyes, use no magnification, and are built to be very compact. These traits result in shooters having a broader field of view and quick target acquisition time. The best sight for you depends on how you plan on using it.

At distances out to a few hundred yards, red dots are incredibly effective. They’re also reliable, energy-efficient, and relatively inexpensive. Sure, you might not always be as precise with a red dot, but in real-world scenarios where follow-up shots are a given, the speed advantage is well worth the tradeoff.

As great as red dot sights are, many marksmen still prefer iron sights for precision shooting on known-distance ranges. Even the best models aren’t as versatile as the RCO or ACOG found on standard military rifles, either. Without magnification or advanced reticles, red dots require more guesswork on the part of the shooter (all the more reason to practice).

They also require batteries. While red dot sights get thousands of hours of use out of their batteries, it’s still a limitation that most sights and scopes don’t have. Many shooters will still run a set of backup iron sights in addition to a red dot for this reason.

The illuminated reticle that forms a red dot is created by an LED or laser. This is typically adjustable for brightness, so you can suit your preferences and match ambient lighting conditions. Brighter reticles are easier for your eye to pick up, but they also appear larger over your target and cause more strain on your eye.

The LEDs and lasers in red dot sights are very efficient, so you can expect tens of thousands of hours out of your batteries. Turning your optic off when not in use or allowing it to enter sleep mode is one way to save energy, but many users leave their optic on at all times so it’s always ready. A few models include a small solar panel that can extend battery life up to 50,000 hours and even function without a battery with adequate light.

Like any good sight, red dots can be adjusted for windage and elevation. Establishing a proper zero for your weapon system is critical, so take it seriously and learn how to do it right. Most shooters use Kentucky windage, meaning they move their point of aim depending on distance and environmental conditions rather than repositioning the reticle itself.

Red dot sight is a broad term that encompasses reflex and holographic sights. These optics provide similar shooting experiences, but work differently behind the scenes. Which one you choose will depend on budget, as well as your preferences regarding size, weight, and magnification compatibility. Both styles include models that are compatible with night vision.

Reflex sights are incredibly simple; they use an energy-efficient LED to project an illuminated dot or other reticle onto a concave lens. A coating on the glass picks up the reticle and presents it to the shooter as a floating image. This kind of optic is available in tube-style construction or as an open lens protected by a metal hood. Because of this simplicity, these red dot sights can be very compact and inexpensive. Some popular models include the Aimpoint PRO and Holosun 510C.

Holographic sights appear similar to prism and reflex sights, but their inner workings are far more complicated. Rather than projecting an LED reticle directly onto a lens, holographic sights bounce a laser off a series of mirrors along the way. This approach results in reduced parallax distortion and superior performance with magnifiers.

Holographic reticles remain their original size when combined with a magnifier; reflex red dots will be magnified as well, resulting in a massive dot over distant targets. Popular holographic sights include the Eotech 512 and Vortex AMG UH-1.

Why do you want one?

Red dot sights have grown in popularity since their introduction because of their ease of use and relatively low cost. Think of them as a way to bridge the gap between iron sights and the fixed-power optics used by the military. Because red dot sights are unmagnified, they work extremely well in close quarters.

Target acquisition is much faster compared to traditional open sights, since no alignment is required. Instead of forming a proper sight picture using a rear sight aperture, front sight post, and your target, you can just place the reticle on your target and be in business. Because red dot sights can be used with both eyes open, they also allow superior situational awareness and field of view.

As distances increase, red dot sights start to lose their competitive advantage. Pairing your red dot sight with a magnifier helps, but that’s another piece of gear you need to buy, train with, and employ. That being said, don’t fall into the trap of thinking red dot sights are only useful on the pistol range. Quality training will have you knocking down targets several hundred yards away with a basic red dot sight.

A: Like any component of a weapon system, red dot sights are as accurate as the shooter behind them. Fail to train with your optic and learn how to employ it properly, and you should expect poor results. If you mount your red dot sight correctly, zero it for the distances you’re most likely to encounter, and practice the fundamentals, red dot sights can be incredibly accurate and offer faster target acquisition than iron sights or a magnified optic. Remember that a smaller red dot (think three MOA or smaller) will be more precise than a larger dot. The tradeoff will be potentially spending more time acquiring proper sight picture as a result of the smaller dot being harder for your eyes to pick up.

A: Red dot sights work very well at night. One of their primary advantages is the fact that they are illuminated, so you aren’t stuck with black iron sights or a black optic reticle on a dark background. In darkness or low-light situations, having a variable intensity red dot sight is a big advantage. What works in broad daylight can be so bright at night that the contrast makes it hard to see. Dial that power back to match your surroundings and create a sight picture that’s easy for your eyes to work with.

Q: Which is better, green or red dot sight?

A: Choosing between red and green dot sights is a matter of personal preference. Red dots are far more common, and for good reason. Red objects naturally draw our attention–that’s why you see red on stop signs and emergency vehicles (and fast-food restaurants). Because red is relatively uncommon in nature, it also stands out well in contrast to green foliage, brown earth, and white snow. For most people, red is the way to go.

On the other hand, red dot sights do place more strain on the eyes than green alternatives. Many older shooters experience less eye strain with green dot sights, as do people with astigmatism. If you primarily shoot traditional silhouette or bullseye targets at the range, green dot sights will still offer fantastic contrast and allow you to shoot accurately.