The M4 and M16 family of rifles don’t deserve the sour reputation they’ve been saddled with since the first M16s... 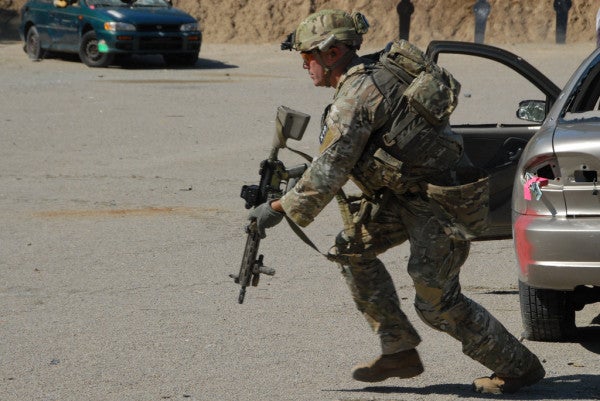 The M4 and M16 family of rifles don’t deserve the sour reputation they’ve been saddled with since the first M16s had reliability issues in Vietnam. All of those problems, mostly stemming from bad magazines, inferior gunpowder, and a misguided notion that the weapons was self cleaning, are gone in current incarnations of the rifle. Every attempt to find a replacement has borne little fruit. Over the past 15 years, the civilian firearms industry and special operations units have developed a number of innovative parts for AR-15-style rifles that leave M4 and M16 variants looking rather dated. With both the Army and Marines Corps potentially upgrading their rifles, here are a few components that will bring theses weapons to the next level.

The Picatinny rail standard was a revolution when it was introduced in 1995. With a system of standardized T-shaped ridges and gaps, Picatinny rails allowed for truly modular accessories. Both the M4 and the M16A4 feature “quad” Picatinny rail handguard systems made by Knight’s Armament Company that have remained in use since they were introduced in the early 2000s. This design allows for plenty of attachment space, but has two major flaws.

First, they are not “free-floating” handguards, which are handguards that do not interface with the barrel in any way. The current quad rails are connected to the front of the barrel at the front sight; this means that any pressure exerted on the rails by the shooters will have a significant effect on the weapon’s accuracy.

Free floating rails solve this issue by attaching only to the receiver: The barrel “free floats” inside the rail system and is unaffected by any pressure from the shooter’s grip or sling on the handguard. The military actually already has free-floating rails in the inventory; this Daniel Defense quad rail system is in use by many units in Special Operations Command.

But this brings out second major issue: The quad rail design is bulky, heavy, and uncomfortable to hold. While a quad rail does provide a great deal of real estate for mounting accessories, most of it isn’t necessary; you really only need short rail segments to mount most accesories.

Tube rails, like the above Daniel Defense model, have been popular with civilian and special operations shooters for years now, and it’s time to bring their many benefits to the military at large. Tube rails are significantly light, reducing the overall weight of the weapon. Some tube rails are less than one inch in diameter, making them the rail less bulky and easier to grip using modern techniques. Finally, tube rails allow as much attachment space as needed using bolt-on sections of Picatinny rail, or newer, low-profile direct mounting interfaces like Keymod or M-LOK. The user only needs to mount enough rail space for each attachment, or simply direct mount them to the handguard.

The gas block functions as an important part of the M4 and M16’s direct impingement system; it funnels gas into the tube and back into the bolt carrier group in order to cycle the weapon. On the M4 and M16, the regular gas block is fixed. This was fine when those weapons were first conceived, but times have changed.

An adjustable gas block allows the shooter to easily regulate the amount of gas that flows through the gas tube. This has two main applications for military use. First, it makes using a suppressor significantly easier, as the user is able the regulate the gas systems to ensure the weapon cycles reliably. Second, it allows certain types of specialized ammo to run through the gun smoothly; the ability to reliably shoot precision ammo would lend both the M4 and the M16 to use as a designated marksman rifle when dedicated platforms like the Mk. 12 or M110 are not available. Both of these would provide valuable capabilities.

The standard A2 “birdcage” flash hider has been the only muzzle devices mounted on M4 as and M16s in conventional units for decades. It’s time to change that.

Quick-detach suppressors like the Knight’s Armament model pictured above have become extremely popular in the past decade. They use a mechanism that allows the suppressor to be quickly slipped over and secured onto an existing flash hider, compensator, or muzzle brake. While the silencing capabilities of suppressors have been vastly overstated in popular media, they do provide a limited measure of stealth. More important is the safety role of suppressor; it makes firing the weapon hearing-safe, particularly indoors. Without a suppressor, a shooter must wear hearing protection to avoid temporary and permanent hearing loss.

Advances have been made in other types of muzzle devices. New “hybrid” devices have come out that offer the low signature muzzle flash of a flash hider with some of the properties of a muzzle brake or compensator; namely a small reduction in felt recoil and muzzle climb.

Some of these improvements have already been adopted by special operations forces. SOCOM adopted versions of a quick-detach suppressor series made by Surefire in 2012.

This is more of an improvement for the M16 than the M4; the M4 already features a six-position adjustable stock. The M16 has a fixed stock, which was the norm when it was first introduced. But today’s reality is much different. Most service members wear hard body armor systems in a combat zone. Many will be constantly moving it out of various vehicles and aircraft. And one thing that hasn’t changed: People’s arms are different lengths.

Retractable stocks, like the one above developed by Naval Special Warfare Center Crane Division, allow the user to select whatever length of pull is most comfortable. Retractable stocks also enable the rifle to be easily carried inside vehicles and aircraft. The Army and Marine Corps could simply swap out fixed stocks for the standard M4 and Crane stocks already in inventory, or they could upgrade both guns with a new commercial stock design. Companies like Magpul, B5 Systems, and Vltor offer enhanced stocks with quick-detach sling points, battery storage, and other features.

Optics are now commonplace in the hands of infantry units. The M68 red dot optic (known as the Aimpoint CompM4 to civilian shooters), the M150 magnified scope (Trijicon Advanced Combat Optical Gunsight), and EOtech 553 holographic weapon sight have all seen widespread use in the Army and Marine Corps. However, optics technology has rapidly grown in the past ten years, and many of these designs are now outdated.

The latest optics, like Aimpoint Micro T-1 red dot sight pictured above, are smaller and lighter than their forebears. Battery life is also improved; the T-1 for example has five years of continuous use at the fourth highest brightness setting. Sights like the T-1 and newer EOtech models also can use magnifiers to provide better options for long-range shooting. New models from companies like Trijicon or Leupold provide hybrid options that can serve both close quarters and long range roles.

Here’s one things everyone in the firearms community can actually agree on: Magpul PMAGs rule.

Far and away, the Magpul PMAG is the most popular aftermarket AR15 magazine. Its polymer construction makes it less likely to suffer bent feed lips, a common cause of malfunctions with standard aluminium magazines. It has a four-way anti-tilt follower that prevents misfeeds or double feeds. PMAGs simply feed ammo reliably, which is why they’ve become a ubiquitous sight among civilian AR-15 shooters and special operations personnel. It’s time conventional forces got with the program.

A good sling is an important component of any fighting rife. It allows the user to stow the rifle when they climb an obstacle, transition to sidearm, or any other number of task that require them to use both hands. A good sling allows for comfortable patrol carry and ensures that the user retains the weapon if they fall, slip or get knocked over. Unfortunately the military hasn’t been issuing great slings.

The standard issue sling is either a simple two-point sling with fragile buckles, or a three-point monstrosity of sling that is confusing to install on a rifle. Special operators have thoroughly tested slings over the years. They settled on quick-adjust two-point designs, which allow the shooter to quickly alter the length the sling. The user cinches it tight to stow it on their chest or back, and loosens it for shooting or switching shoulders. Quick-adjust slings have become the preferred choice of law enforcement, special operations, and competitive shooters.

The Marines are ahead of the game in this regard; in 2012, they began to issue and train with the Vickers Combat Applications Sling (pictured above), produced by Blue Force Gear and designed by Larry Vickers, a former Delta Force operator.

All of these upgrades serve to extend and enhance the capabilities of the M4 and the M16. Even in the age of the sequester, these upgrades are cost-feasible, especially compared to programs like the F-35 or the Littoral Combat Ship. Combined with new and improved shooting techniques, they’ll make a good weapon even better.