How Samuel Colt Went From Failed Businessman To Renowned Gunmaker

There are few names that invoke the American Frontier more than Samuel Colt, but before his revolvers helped win the... 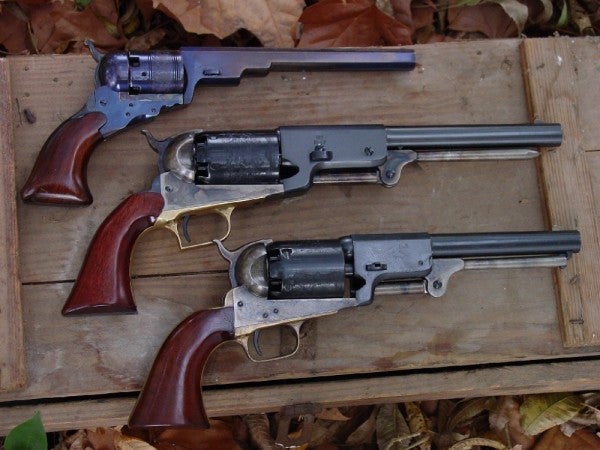 There are few names that invoke the American Frontier more than Samuel Colt, but before his revolvers helped win the West, Colt was a struggling gunmaker. On Jan. 4, 1847, Colt won a contract to supply the U.S. government with 1,000 newly designed .44-caliber revolvers to help arm U.S. troops in the Mexican-American War.

This marked the rise of the revolver and secured Colt’s future as a legendary American gun manufacturer.

According to Colt Manufacturing’s website, the company’s namesake is said to have come up with the idea of the revolving cylinder in 1830 while he was a seaman on the Corvo. Colt was fascinated with the way the ship’s wheel could be locked in place with a clutch, or spun around, and translated this idea of “controlled rotation” into creating a new kind of firearm, explained History.com.

In 1835, Colt submitted his first patent for a revolver and a year later, at 22 years old, he opened his first plant, Patent Arms Manufacturing Company, in Paterson, New Jersey, with the help of a wealthy uncle.

A steel engraving of Samuel Colt with a Colt 1851 Navy Revolver.

Colt’s invention was a revolutionary one; however, it was met with hesitation and disinterest. While a revolver would allow a shooter to fire multiple rounds — usually five or six — before having to reload, the initial designs were too complicated and prone to problems like jamming, and so most gun owners opted to stick with flintlock muskets and pistols.

Initial reviews of the weapon by an Army board in 1837 reported “that from its complicated character, its liability to accident and other reasons, this arm was entirely unsuited to the general purposes of the service.”

The design was improved, and in 1840, Colt’s company acquired two small orders for its pistols, but the handguns were expensive to produce and the sales were low. By 1842, the shareholders had taken control, Colt’s Patent Arms Manufacturing Companywas closed, and its guns and parts were auctioned off.

Though his factory was closed, the weapons Colt sold continued to be fielded in combat, especially on the frontier in Texas, where rangers and U.S. Army troops attributed their success to Colt’s firearms. In 1846, with the Mexican-American War underway, Army Capt. Samuel H. Walker collaborated with Colt to design a new, more powerful revolver, dubbed the Walker.

The Colt Walker was a single-action revolver that held six charges of black powder behind six .44-caliber lead balls.

Their efforts produced a revolutionary new handgun and with it the fledgling company was saved. In just four years, Colt went from a manufacturer without a factory to being the first American to open a plant in England, thus solidifying a global reputation that remains to this day.