U.S. special operations could be getting some ultra-stealthy new wheels. First introduced at a national defense industry conference in May... 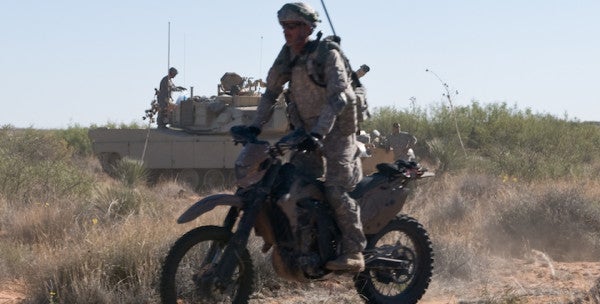 U.S. special operations could be getting some ultra-stealthy new wheels.

First introduced at a national defense industry conference in May as the winners of a DARPA competition, these two futuristic dirt bikes — the Nightmare by LSA Autonomy and the SilentHawk by Logos — are the perfect mix of stealth and strength, capable of traveling up to 80 miles per hour while keeping their noise levels around 55 decibels — about as loud as an indoor conversation or an electric toothbrush.

The dirt bikes are similar but not identical. Weighing in at 400 pounds, the Nightmare is the larger and more powerful of the two. Both models are designed to travel long distances and carry multi-fuel engines that can run on anything from gasoline and jet fuel to olive oil. The motorcycles also have an electric mode powered by lithium batteries for even stealthier operations. But most impressive is the fact that the bikes essentially function as mobile generators.

The SilentHawkPhoto courtesy of Logos Technology

The Nightmare can generate 13 kilowatts of power, which could be used to power battlefield communications, observation and combat outposts, water purifiers, medical equipment, and other vital machinery. Bigger isn’t necessarily better, though. The SilentHawk is just as powerful as the Nightmare, even though it’s 50 pounds lighter — a key trait when stealth is paramount. The smaller bike can also generate up to 7.5 kilowatts of power and has a travel range of 170 miles per trip.

DARPA has funded both to phase two of development. If and when they move beyond the development stage, these motorcycles could give American commandos a major edge on the battlefield. Their compact size, strength, and versatility paired with their two-wheel drive features make them the perfect all-terrain vehicles for stealthy missions, especially in places like forests and dense urban environments where wider vehicles can’t maneuver well. And their utility isn’t limited to the battlefield. The SilentHawk and Nightmare could also be used by first responders during and after natural disasters when energy is scarce.

Silent motors are invaluable assets, but there were serious concerns about the lithium batteries, because they’ve been known to explode. But Logos’ lead engineer, Alex Dzwill, made sure to address those concerns in a recent interview withDefense One, explaining that, like the Nightmare, the SilentHawk is equipped with the same sophisticated multi-cell chamber system used in Tesla cars that ensures the battery won’t explode if a single cell fails.

Considering they just received development grants from DARPA and are only prototypes, the SilentHawk and Nightmare aren’t America’s all-terrain vehicles of the future just yet. But when you consider the grit, ingenuity, and versatility these motorcycles bring to the table, it seems inevitable that these bikes, or ones like them, will eventually hit the dirt, giving American commandos yet another option for maneuvering quickly and quietly through the austere environments in which they typically operate.