5 Cold War Mistakes That Nearly Killed Us All

In October 1962, the United States and Soviet Union came to the brink of nuclear war during the Cuban Missile... 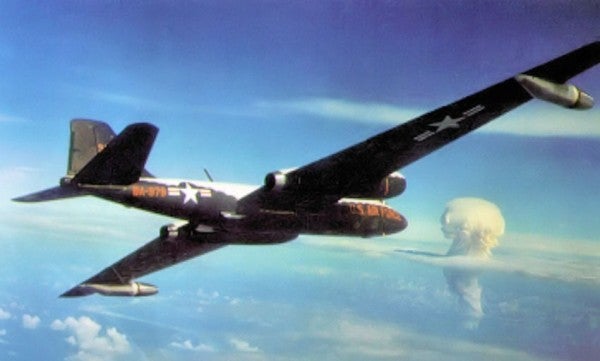 In October 1962, the United States and Soviet Union came to the brink of nuclear war during the Cuban Missile Crisis. The standoff occurred over the installation of nuclear missiles on Cuba, just 90 miles from the states. Though the stalemate ended after 13 grueling days, it was neither the first or last time the two world powers would very nearly come to blows.

Related: The Man-Portable Rocket Launcher That Could Destroy A City Block »

In the following years, until 1991 when the Cold War officially ended with the dissolution of the Soviet Union, America’s military and its Russian counterpart incited mass panic and narrowly avoided World War III no fewer than five times.

While some of these incidents sound like they’re plucked out of “Dr. Strangelove,” they’re real.

Between fried computer chips, playing the wrong tape, or misinterpreting a signal, it’s a wonder that we’re still here.

Here are five times that a dumb mistake nearly ended the world in giant ball of nuclear fire.

That time someone accidentally triggered the Emergency Broadcast System.

In 1971, though Cold War tensions had simmered, compared to their high point in the early ‘60s, the war in Vietnam was still in full swing, which explains the mass confusion that occurred on Feb. 20, 1971, when the Emergency Broadcast System was accidentally triggered at 9:33 a.m.

For the next 40 minutes, regularly scheduled programming was put on hold as listeners and broadcasters anxiously waited to hear an announcement from the White House. Fortunately, it was a mistake, there were no nuclear missiles hurtling toward the United States, or hostile military forces advancing on U.S. territories.

The error highlighted some problems with the Emergency Broadcast System’s safeguards and procedures. Roughly 20% of the outlets followed the correct procedures and cleared the air, the rest either started to, but stopped, or just ignored the alert completely. After operators at the National Emergency Warning Center in Colorado realized their mistake, they sent cancellation messages; however, they failed to use the correct codeword — “impish” — so that slowed things down a bit.

In 1979 the U.S. military thought its own training simulation was real and almost started World War III.

Except it hadn't. A realistic training tape was accidentally inserted into the computer that ran the nation’s early-warning programs. Fortunately the mistake was discovered within minutes after the raw data from satellites and early-warning radar systems showed no inbound missiles or enemy bombers.

Then, less than a year later, there was another computer glitch.

On June 3, 1980, U.S. military command received a warning that the Soviet Union had launched a nuclear strike. Same as before, the military scrambled interceptors, missile launch crews were put on red alert, and bombers were readied. There’s no way it could be another mistake, right? Wrong.

Fortunately, a threat assessment conference was immediately convened and again scoured the raw data, discovering no missiles had actually been launched. Turns out, a single computer chip on the monitor had failed and caused random numbers of attacking missiles to appear on the screen.

A Russian commander avoided the end of the world by not telling his superiors about a possible nuclear attack.

At midnight on Sept. 26, 1983, a Soviet missile detection bunker went into a panic when an alarm sounded, signaling that United States had launched five intercontinental ballistic missiles toward Russia.

In reality, the warning was a false alarm caused by the the Soviets mistaking a glint of sunlight off clouds near Montana as a missile launch. Though protocol demanded that the bunker report any signs of a missile launch to Soviet high command, Lt. Col. Stanislav Petrov knew the satellites were prone to errors and reasoned that an actual preemptive nuclear strike would involve hundreds of missiles, not five. Given the high tensions in both the Soviet Union and the states, Petrov’s decision to follow his gut and not report it may have averted a nuclear holocaust.

Speaking of tension, a few months later the Soviet Union thought a NATO training exercise was a preemptive strike.

Though it was not widely known at the time, in November 1983, the United States and the Soviet Union came closer to starting World War III than at any time since the Cuban Missile Crisis. During a NATO war game in Europe, dubbed Able Archer 83, the U.S. military moved 19,000 troops to the area, relocated its command elements, and raised its alert status — all steps that would typically be taken in a time of war.

Meanwhile, the Soviet Union was losing its mind on the other side of the iron curtain. According to documents declassified decades later, relations with the Soviet Union were “on a hair trigger.” The Soviet military was on high alert, its nuclear arsenal was readied, and units in East Germany and Poland had fighter jets prepared for takeoff, due to concerns that NATO’s war games were a ruse ahead of a preemptive strike. The country remained at that readiness level until the training exercise ended on Nov. 11 of that year.