John Kerry famously asked in a 1971 congressional testimony on Vietnam, “How do you ask a man to be the... 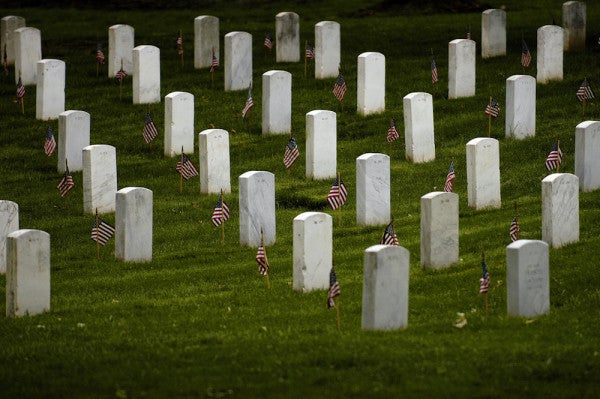 John Kerry famously asked in a 1971 congressional testimony on Vietnam, “How do you ask a man to be the last man to die for a mistake?”

As the war in Afghanistan continues to rage on after 14 years, and with the recent resurgence of violence in Iraq and now in Syria, a question like that undoubtedly weighs heavy in the minds of service members, veterans, and military decision makers.

The first soldier death marks the place where a war begins, at least for the troops. The last death bookends the war and earns that soldier a particular place in our nation’s history that is a dignified but dubious honor.

Here is a breakdown of the first and last fatalities of major U.S. wars.

First: Isaac Davis (Apr. 19, 1775) — A gunsmith from Acton, Massachusetts, Davis served as a minuteman with his local company. During the Battle of Concord, his company was selected to advance first on the British. When asked if his company was afraid, Davis is recorded as having replied, “No, I am not and I haven't a man that is!” As they advanced, Davis was shot through the heart. He is memorialized with a statue in the Acton Town Common.

First: Elmer E. Ellsworth (May 24, 1861) — Union officer Ellsworth was a law clerk under Abraham Lincoln and an Army soldier. Just prior to the Civil War, he began recruiting for the 11th New York Volunteer Regiment. The day after Virginia voters ratified the state convention’s decision to secede from the Union, Ellsworth and his troops entered Alexandria, Virginia, to assist in the occupation of the city. There, while taking down a Confederate flag, he was shot point blank by innkeeper James Jackson, a defender of slavery. Noting his close relationship with the Lincolns, Ellsworth's body was brought back to the White House, and his casket sat in the East Room. The funeral was attended by both Abraham Lincoln and his wife.

Last: John J. Williams (May 13, 1865) — Williams was a Union soldier who served with Company B, 34th Regiment Indiana Infantry. Though the Union and Confederate companies in southern Texas had a gentleman’s agreement not to fight, Union Col. Theodore Barrett ordered Lt. Col. David Branson to take troops stationed on the island of Brazos Santiago and attack Confederates at White’s Ranch and Palmito Ranch. It was there that the 34th Regiment Indiana Infantry was met with a large Confederate cavalry force. They made the choice to retreat, and Williams was killed. It was a full month after Lee's surrender at Appomattox. Williams died in a meaningless battle at Palmito Ranch.

First: Joseph William Guyton (May 24, 1918) — Guyton joined the Army as a part of the 126th Infantry Regiment and was attached to the 32nd Infantry Division, which was stationed in a German-held area of France. There, he served as an automatic gunner, firing off intermittent rounds on a post near the line of resistance. The enemy shot a barrage of machine gun fire into the line where Guyton was struck and killed instantly. President Warren G. Harding placed a presidential wreath on his coffin at a funeral ceremony for more than 5,000 fallen soldiers in Hoboken, New Jersey, in May 1921.

Last: Henry Gunther (Nov. 11, 1918) — Gunther did not join the Army, but was drafted into the 157th Brigade, 79th Infantry Division. His military unit, which deployed to France in July 1918, was part of the incoming American Expeditionary Forces. During the Battle of the Argonne Forest, Gunther’s unit ran into a German ambush near the French town of Chaumont-devant-Damvillers, north of Verdun. Although a message had arrived that the war would be over within an hour, Gunther went after the two German machine-gun sections blocking a road. The Germans attempted to wave him back and refused to fire until he was within a few yards of their position, but were ultimately forced to shoot. Killed instantly, he was the last American killed in action during World War I, taken out by a German bullet just one minute before the 11 a.m. armistice.

First: Robert M. Losey (Apr. 21, 1940) — A captain in the Navy, Losey was serving as an air attaché in Finland. To aid Florence Harriman, then-ambassador to Norway, he went to assist in the evacuation of American staff and dependents from Embassy Oslo. She wanted to be the one to go, but he refused, saying, “I certainly don’t want to be killed, but your death would be the more serious as it might involve our country in all kinds of trouble, where with a military attaché.” Along the way, Losey and his chauffeur were traveling on the strategic railway called Dombas — a Luftwaffe target. Losey and the chauffeur sought refuge in a railway tunnel. Unfortunately a bomb fragment fell near the entrance and a fragment pierced Losey’s heart. Luftwaffe commander Hermann Göring sent a message of regret regarding Losey's death to Maj. Gen. Harry H. Arnold.

Last: Anthony J. Marchione (Aug. 18, 1945) — Twenty-year-old Sgt. Anthony Marchione served as a gunner and photographer with the 20th Reconnaissance Squadron. In August 1945, his unit was placed in U.S.-held Okinawa. He was flying in a B-32 sent to photograph Tokyo. When two of the accompanying aircraft were forced to return to Okinawa with oil leaks, defensive firepower was cut in half and Marchione’s plane, along with one other from their squadron, were forced to prolong their time over Japan in order to photograph targets. Eventually, Marchione’s plane was met by Japanese pilots. A 20 mm cannon round fired through the B-32, killing Marchione. He was posthumously awarded the Purple Heart, American Campaign Medal, and World War II Victory Medal. It took four years for his remains to be repatriated to his home in Pottstown, Pennsylvania.

First: Kenneth Shadrick (July 5, 1950) — In 1948, 17-year-old Shadrick joined the Army after dropping out of high school. He was deployed for a year in Japan before transferring to South Korea with his unit, the 34th Infantry Regiment, 24th Infantry Division. He served as an ammunition carrier in a bazooka squad sent to stop communist tanks near Sejong, South Korea. As he aimed a rocket at an enemy tank, he stuck his head and shoulders above the gun pit to watch. The tank's machine gun returned fire, sending one bullet through his right arm, another through his chest, killing him instantly. The New York Times reported on July 7, “He died, as doughboys usually die, in a pelting rain in a muddy foxhole.”

First: Richard B. Fitzgibbon, Jr. (June 8, 1956) — Fitzgibbon originally served during World War II in the Navy, joining the Air Force prior to operations in Vietnam. He was a member of Detachment 1, 1173rd Foreign Mission Squadron.Fitzgibbon was not killed in action, but murdered by a deranged American airman who shot him as he was handing out candy to local orphans in Saigon. He and his son, Richard B. Fitzgibbon, III, are also known as one of three father-son duos killed while serving during the Vietnam War. Acknowledgement of Fitzgibbon’s death as the first casualty of the Vietnam War did not come until 1999.

Last: Charles McMahon and Darwin Judge (Apr. 29, 1975) — McMahon and Judge served as members of the Marine Security Guard Battalion at the U.S. Embassy in Saigon, providing security for the Defense Attache Office Compound. After the U.S. withdrawal in 1973, they were two of only a few dozen Marines still abroad. Thought to be out of harm's way, the boys were stationed at Tan Son Nhut air base.One day before the fall of Saigon to the North, McMahon, 22, and Judge, 19, and only deployed for 11 days, were killed in direct hit from a rocket attack. In the process of withdrawing from Saigon, their bodies were left behind. Sen. Ted Kennedy lobbied to get the remains, and after weeks of persistence, was finally able to have them repatriated and buried in 1976.

First: Johnny Micheal “Mike” Spann (Nov. 25, 2001) — After serving in the Marine Corps as a captain, Spann worked a member of the CIA's paramilitary Special Activities Division. He was dispatched to Afghanistan soon after Sept. 11, 2001, to find Osama bin Laden. Near Mazar-e-Sharif, the CIA was holding al Qaeda fighters in the recently captured fortress of Qala-i-Jangi. Spann was killed while interrogating Taliban fighters — in particular, American Taliban John Walker Lindh. According to the video transcript of the interview, Spann said, “You got to talk to me. All I want to do is talk to you and find out what your story is. I know you speak English.” After getting no answer and consulting with another member of his team, Spann was attacked. According to eyewitness accounts given to a German television crew trapped at the compound, Taliban fighters launched themselves at Spann, who took out seven men with his pistol before being killed. The Taliban group, who had feigned surrender, led an uprising that lasted three days. Spann is now memorialized with a star on the CIA Memorial Wall at CIA headquarters in Langley, Virginia. He was also posthumously awarded the Intelligence Star and the Exceptional Service Medallion.

First: Therrell Shane Childers (Mar. 21, 2003) — Childers served as a second lieutenant Marine assigned to the 1st Battalion, 5th Marine Regiment, 1st Marine Division — one of the first cleared units to enter Iraq. After the battalion secured a pumping station at the Rumaila oil fields, 20 miles north of the border with Kuwait, Iraqi soldiers unloaded from a pick-up truck. In a drive-by, Childers was shot once in the stomach. The injury became fatal when his his motion to fire at those in the truck lifted his body armor, leaving him exposed. He was assigned the rank of first lieutenant posthumously and laid to rest in Powell, Wyoming, near his parents.

Last: David Hickman (Nov. 14, 2011) — In 2009, Hickman enlisted with the Army’s 2nd Battalion, 325th Airborne Infantry. One month prior to withdrawal from Iraq, the unit was serving in a police capacity, known as “presence patrols,” walking through Iraqi neighborhoods. He was killed in Baghdad when his armored truck was blown up by a roadside bomb. When his mother Veronica was told of her son's death, she said, “I am proud of him. He died for his country.”

CORRECTION: An earlier version of this article identified Charley Havlat as the last man killed in World War II. Havlat was the last soldier killed in Europe. (11/19/2015; 5:15 pm)