This Vet Found The One Way To Improve The Woobie

Service members love their poncho liners, or woobies. And who’s to blame them? That silky sheet of fabric is probably... 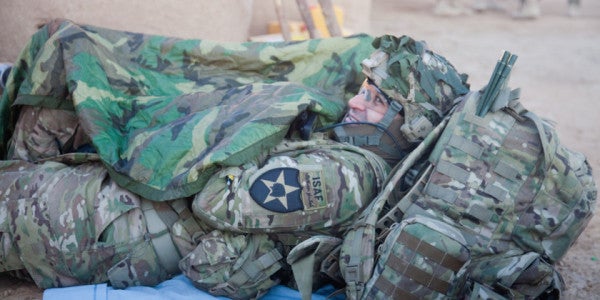 Service members love their poncho liners, or woobies. And who’s to blame them? That silky sheet of fabric is probably the only piece of military paraphernalia all veterans hold on to as a keepsake from their military careers, unlike glow belts. Which we all hate.

Though some people take their poncho liner love a bit too far. After all, there’s a time and place for the woobie. Right?

Recently, Army veteran Ross Tolleson posted a photo of himself to the closed Facebook group Drinking Bros. In the photo, Tolleson is smoking a cigar, drinking Leadslingers Whiskey, in a badass custom-tailored woobie smoking jacket like a warzone version of Ron Burgundy. Stay classy Army.

According to a screenshot of another post by Tolleson, which was shared on the Facebook page U.S. Infantry, Tolleson had the smoking jacket tailored outside of Camp Casey, South Korea, and shared the image in honor of the Army’s 241st birthday.

“The woobie smoking jacket is my greatest contribution to society, and I'm cool with that,” wrote Tolleson. “Happy Birthday Army, woobie for life.”