5 Things ‘The Walking Dead’ Teaches Us About Leadership

“The Walking Dead” has entertained millions over the six seasons of television on AMC. Most of the selections from the... 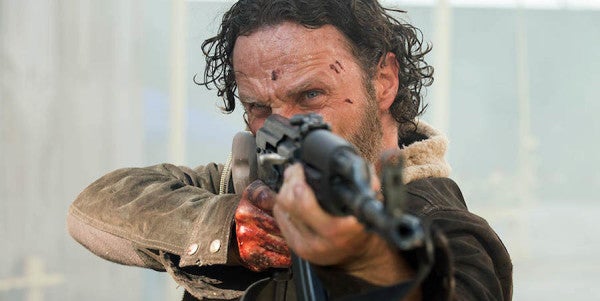 “The Walking Dead” has entertained millions over the six seasons of television on AMC. Most of the selections from the zombie genre are easily forgotten splatter fests, but some stand the test of time as deeper comments on society, such as “Night of the Living Dead” or “Dawn of the Dead.” “The Walking Dead” joins this tradition. As society collapses under the weight of zombie hoards, we get to see what happens, both on a group and individual level.

Here are 5 lessons on leadership we take away from “The Walking Dead.”

Don’t let desperation be your counsel.

Under stress, people seek leadership. They seek hierarchy and order. There are few things more stressful than facing zombies, or “walkers,” in a society where all institutions have collapsed. Bad situations often lead to bad choices in leaders. “The Walking Dead” has shown numerous examples of this happening, from the governor in season three to Negan in season six. It takes an exceptional leader to not take advantage of that desperation.

In normal life, how often does a new commander make changes just for the sake of being different, rather than because what he or she is doing actually makes sense on its own? Change isn’t always a good thing, even when things are bad. Make sure you’re doing right, not just doing something.

You don’t have to be perfect to lead.

Better than the rest is still good enough.

Luckily for the group of wanderers who make up the protagonists in “The Walking Dead,” they have found one of the few leaders in that world who wields power responsibly: Rick Grimes, a former sheriff’s deputy. Initially skeptical of his leadership, Grimes quickly demonstrated his capabilities. Tactically sound, with command presence and decisiveness, Grimes was far better equipped than most to lead a group against zombie hordes.

Being a good leader doesn’t require one to be perfect, and Grimes isn’t. He falls short on occasion. When the group finds itself in a safe haven in Alexandria, disregards the rules of the community and nearly loses his own group in the process. It took getting cold-cocked by Michonne to set him straight. Being wrong isn’t the kiss of death for leaders. Being unwilling to correct oneself when appropriate is.

The group’s survival can be at odds with its humanity. As the group’s ordeal has dragged on to a seventh season, Grime’s tolerance for moral compromise has increased, but he still manages to bridge the gap between pragmatism and principles. Like a Marine on a land navigation course, he keeps his azimuth pointed in the direction of his moral code, even if some obstacles force him slightly off the righteous path.

The counterpoint to Grimes during the show’s first two seasons is Shane Walsh. Walsh was in the sheriff’s department with Grimes, and was similarly well equipped to battle zombies. However, while Grimes’ goal was to survive with humanity, Walsh’s goal was merely to survive. As in anything done for expediency, it works for awhile. For example, Walsh successfully brings back medicine essential to save Grimes’ son by shooting another man, his partner on the mission, in the leg to distract the walkers chasing them. Anytime the ends continually justify the means, one ends up in bad places. Walsh’s disregard for others nearly ripped the group apart and ended up being his personal undoing as well.

Everyone has a breaking point, and even the best leaders are no different. For much of the beginning of the series, Grimes took far too much responsibility on himself and failed to delegate. When he came across a problem he couldn’t handle, the group suffered for it. For example, after his wife died, he disintegrated for a time, leaving the survivors aimless. Earlier in the series, Grimes had asserted his sole command of the group after the disaster at the farmhouse, creating what fans called the “Ricktatorship.” While a rudder steer was definitely necessary, his move squashed initiative by his subordinates. Only when his emotional collapse forced some of them to step up did they inadvertently reach their potentials.

This is a key leadership point: The measure of a truly great leader is not whether a leader has made himself essential, but whether he has built a group that can be successful even after he leaves. A leader is always in danger of leaving, be that by transfer, battlefield casualty, or being eaten by zombies. The group needs to be able to keep going without him.

Look for the best in people.

One of Grimes’ subordinates, Daryl Dixon, is a rough-hewn, Harley-riding, crossbow-slinging badass. As the beginning of the story, though, he’s just a maladjusted loner living under the shadow of his older brother Merle. He’s a capable hunter, both of animals and zombies, and an accomplished outdoorsman. He’s initially content to only provide those services to the group, living with the group, but not part of the group for the longest time. Often, he’s almost a hindrance through his passive-aggressiveness. Eventually, the group offers him the sense of belonging that he never found as a delinquent, and Dixon ends up being a capable second-in-command, and often the voice of reason for the group.

Good group dynamics are key to bringing out the best in people. Too often, groups cast out individuals with outstanding potential, just because they seem to be too much trouble. That happens in the military all the time — a promising young service member has some minor disciplinary problems and is cast aside quickly without even finding out what the root problems are. Once Dixon emerged from his brother Merle’s shadow, he was free to become the zombie-killing badass he was born to be. Similarly, if we spend time with some of our subordinates, more of them can become the people they were meant to be when they joined.

Of course, “The Walking Dead” is just a fun TV show, and we have to be careful about drawing too many parallels to it. Still, art imitates life. Good works of art, be those books, plays, movies, or television, give us a chance to stand in others’ shoes and think about how we might act in similar situations. I just hope I can do as good a job in my daily life as Grimes does in the zombie apocalypse. His leadership class is still in session for at least another season though. I hope he makes it.