No doubt many people agree that watching “The Walking Dead” is a challenge for anyone with any tactical experience. It’s... 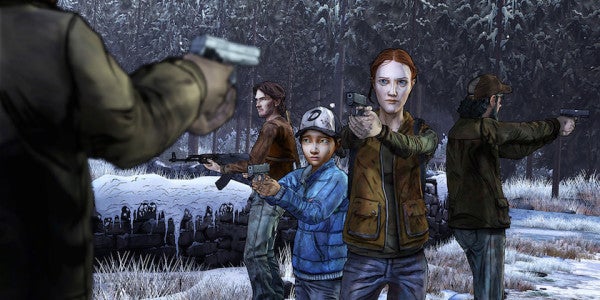 No doubt many people agree that watching “The Walking Dead” is a challenge for anyone with any tactical experience. It’s a wonder I don’t go hoarse or destroy my television in frustration at all the terrible decisions the characters make. It’s possible, though, that the characters on the show are like most people, and simply never have considered what to do when the world ends. They are learning on the job, and that’s not easy in the horrible world they occupy.

Planning for a “zombie apocalypse” might seem like just an amusing diversion, or even a complete waste of time. But consider that the Federal Emergency Management Agency has actually embraced “zombie apocalypse” themes as a good way to get people prepared for natural or other disasters. FEMA even held a series of seminars on the subject.

What follows are nine simple ideas to help you make any apocalypse your bitch, whether it’s zombies, kaiju, meteors, EMPs, Democrats, or the alt-right. They probably don’t comply with FEMA guidelines. If your problem is just temporary, you may want to dial them back a little.

First step is to protect yourself and others. You need weapons and armor. This can be situational, so consider the enemy. Are there alien or magical foes that must be killed in unusual ways? Has some kind of magical event rendered firearms unusable? Even mundane disasters like mega-volcanoes or pole shifts will certainly generate human warlords and gangs, so be sure to secure firearms and armor. For procurement, think outside the box — Guard armories, police stations, and sporting goods stores are all great places to start looking. But also consider shooting ranges and remote cabins. If you live in a red state, your local WalMart or pawn shop may be a good idea, too.

Wandering is a good way to get dead quickly. You need to find a place to hole up.

Secluded is best — cities attract bad guys, whether it’s human bandits or the undead. Country ranches or farms are probably best, along with ghost towns or abandoned industrial complexes. Also desirable are large university or academic buildings close to, but not inside, medium-sized towns (like in “The Girl Who Owned A City”).

If the enemy can conduct aerial recon, whether aliens a la “Falling Skies” or commies a la “Red Dawn,” consider a large warehouse or garage with roll-up doors so you can button up and prevent observation. The easiest way to avoid confrontation is if the enemy doesn’t know you’re there. If you decide to remain in the city, consider clearing a tall building and then making it impregnable: chain or weld outside doors shut, and only enter/exit through the second story or higher.

Fences are good. Walls are better. Moats are a plus. Active, alert sentries trained and equipped with long guns are a must. Consider area denial weapons (Claymores, IEDs, whatever you can handle) and lines of site. Improve your area as much as you can without calling attention to yourself. Consider dead space: have one of your own walk the perimeter, and if he can approach to within 500 meters unobserved, do something to deny that area, whether it be planting thorny brambles, mining, c-wire, or what have you. If you’re in a building, knock out first-floor stairwells and use ladders — and only drop them when somebody is entering or leaving.

Never leave your approaches uncovered. Constant 360 degree security. Roving patrols. Trip lines with noisemakers. Buddy system at all times. Consider noise and light discipline, because in some cases a brightly-lit window at night may as well be a neon KILL US sign. And oh yeah, every single person, no matter how old, carries a weapon, and is trained in its use. There are no pacifists in the End Times.

Have a way to bolt quickly. I recommend an escape tunnel, but a zipline over a river or to a nearby highrise works too. And not just a way out: have a precedence list for what to grab first and bugout bags if you have the ability. Embassies and military HQs have a battle drill for what to grab first, and what to destroy first, in the case of imminent overrun. You need to do the same, even if you’re just a group of 12 people sheltering in an abandoned gas station in Opelika. Don’t ever bed down without going over the evac plan. When staying for more than a few nights, prepare a more in-depth plan. Hold evac drills.

Your guns, generators and vehicles are just junk if they don’t work. Take care of them and they will take care of you. Clean your weapons every day, even if you haven’t used them. Vehicles, less so, but when you’re cruising for fuel, don’t forget the 10W-40, fan belts, wiper blades and filters. You’re going to need to grab all the lubricants and o-rings you can, and other operator-level replacement parts too, because even if the government has survived, it’s going to be awhile before you can just pop down to the O’Reilly and buy a quart of oil and a spark plug.

King Ezekiel’s “Kingdom” (in The Walking Dead) has the right idea. From the get-go, you should be thinking about the long game; namely, crops and livestock. Raid the local plant nursery and get all the vegetable and fruit seeds that you can. Raid farms or zoos for livestock to breed. See season two of The Walking Dead video game: up on top of that Home Depot, they have a very large garden and even some small livestock pens. Raid libraries and schools for medical, survival, and reference books. That funny old book about how to make candles or soap will soon be priceless. For that matter, any people you have with medical training need to be kept safe at all costs.

Even in 2016, disease and illness tends to cause more casualties than enemy action. Personal cleanliness and hygiene is a must. People tire easily when scared and working hard, and forget to wash their hands. Somebody needs to be the handwashing nazi at every meal, and all personnel need to bathe frequently. You also need a trash disposal plan, not just to prevent disease, but depending on your particular apocalypse, the aliens or warlords may be tipped off to your presence by a trash pile.

In almost every conceivable apocalypse, unless it’s practically an extinction-level event, some form of government will either remain or reform within months or years. All you have to do is survive until you can make contact. Stock a few commercial, ham and CB radios, and make sure one of your party learns morse code. Have a polite, concise introduction prepared, because even if you’re meeting a party from the new U.S. government, they will likely be as wary of you as you need to be of them.

If your worst-case scenario is a flood and a bridge out, you can probably get away with relatively few of the items and ideas above. But it won’t hurt to have thought about a much worse case situation.